Trump to give Iran a thumbs up once again 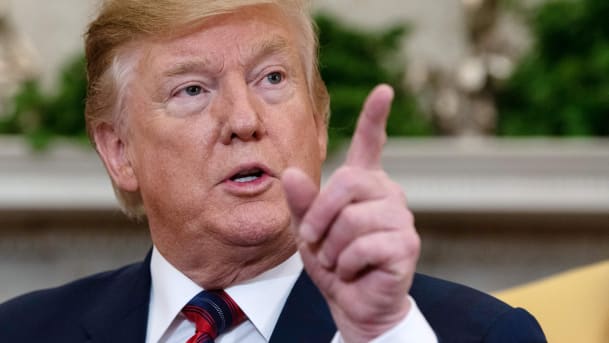 US President Donald Trump will most likely endorse Iran’s compliance with the Joint Comprehensive Plan of Action (JCPOA), a historic deal signed in 2015 in a bid to prevent Tehran from going nuclear. Trump, despite reservations,  will give passing marks to Iran.Under U.S. law, the State Department must notify Congress every 90 days.Trump has a congressionally mandated deadline of Monday to decide.

The deal was signed in 2015 between Iran and United States, France, Britain, Russia, China, and Germany.The deal ended a potentially incendiary crisis in the sense that curtailed Iran’s quest for the ultimate weapon.

Iranian President has also been criticized by the Supreme Leader in cracking the deal, but all in all, it was welcomed for it freed the country from much of the sanctions.

However, Barack Obama’s opponents to include Trump had castigated the deal. President Trump had lambasted the deal and promised to “rip up” what he called “the worst deal ever.” This will be his second endorsement of Iran’s cooperative behavior.

Read more: U.S Iran nuclear deal: what will be its implications in the…

The deal has been flayed due to it lacking a mechanism to stop Iran from pressing forward to bear the teeth. Iranian President has also been criticized by the Supreme Leader in cracking the deal, but all in all, it was welcomed for it freed the country from much of the sanctions.

However, while lifting nuclear-linked sanctions, the United States maintains sanctions related to Iran’s ballistic missile program, human rights record and what Washington charges is its support for international terrorism.

Iran and the US are fierce rivals; there is no desire or an attempt to mend ties. While the US is clubbing Iran with words, sanctions, and threats of regime change, Iran is holding firm.

President Trump enjoined upon all countries to confront Iran since it is the biggest supporter of terrorism in the region.

Defense Chief, General James Mattis on Tuesday  said that regime change is essential to improve ties with Iran.“Until the Iranian people can get rid of this theocracy, these guys who think they can tell the people even which candidates they get a choice of. It’s going to be very, very difficult,” Mattis told the Mercer Island High School Islander in a rare and special interview with high schooler Teddy Fischer. Rex Tillerson also talked about regime change in Iran last month.

Read more: Identifying the common enemy: Is Trump missing a chance to mend…

The US and its Arab allies are at loggerheads with Iran and are on a spree to curtail its influence in the Middle East.Iran’s continued support for Hezbollah; the Houthis and the Assad Regime has brought it in direct conflict with the US and the Saudi-led Arab alliance.President Trump enjoined upon all countries to confront Iran since it is the biggest supporter of terrorism in the region.

Even the attacks in Tehran last month by the ISIS could not bring both countries closer. Trump was sarcastic in his condolences while Iran’s Supreme Leader called ISIS as a progeny of the US.

The anti-Iran rhetoric is on the upswing in the US. Last month, the Senate unanimously ratified sanctions over Iran’s ballistic missiles and its alleged continuation of support for terrorism.

No Detente in sight

Chatters pertaining to regime change; sanctions and diatribes do not augur well for the future. The US is firmly behind the Saudi-led surge against Iran. The battlefield dynamics in Syria and Iraq indicate that a new tussle will initiate between the two countries.

Washington and Tehran will certainly not be on the same page. in addition, Iran’s reconfiguration of ties with Hamas will preclude any chances of a thaw in relations.

The US is not ready to acknowledge that the ISIS is a greater threat to Iran. This has led them to fight the same enemy without cooperating with each other. The US deems Iran’s fight against ISIS as an attempt to expand its sphere of influence while Iran asserts that ISIS is used by the US and Israel to keep the pot boiling.

The boycott of Qatar ostensibly on behest of its ties with Iran has also further strained ties between the two. However, Iran and Qatar have come closer; Doha remains defiant amid the lingering crisis. The capitulation of the ISIS will result in a power scuffle in Syria and Iraq. Washington and Tehran will certainly not be on the same page. in addition, Iran’s reconfiguration of ties with Hamas will preclude any chances of a thaw in relations.