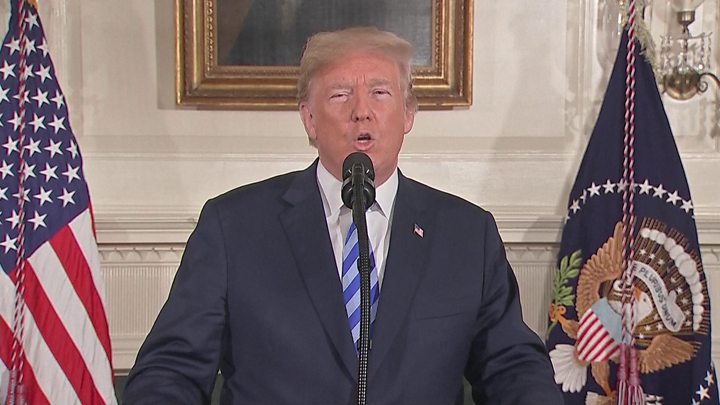 US President, Donald Trump, finally announced to pull out of the Iran Nuclear deal signed in 2015 by his predecessor, Barack Obama. Addressing a press conference in White House, the tycoon-turned-president termed the deal embarrassing for the United States, alleging that Iran had lied about the deal.

The 45th president also announced that he would re-impose economic sanctions that were waived when the deal was signed in 2015, defying the advice of European allies to stay in the agreement. The US president – who was asked by British, French and German leaders to honor the agreement – said the deal was supposed to ensure the safety of the US and its allies, but it paved way for the Muslim majority state to continue enrichment of uranium.

Besides scraping the Joint Comprehensive Plan of Action (JCPOA), termed generally as the Iran Nuclear Deal, Trump unleashed a fresh tirade of allegations against Iran, accusing it of state terrorism and having wrecked havoc across the Middle East and beyond. The republican leader decried that the ‘one-sided’ deal should never have been made in the first place.

Tehran has also retaliated in the same coin after Trump’s withdrawal from the nuclear deal. Iranian President Hassan Rouhani has said that he has ordered the foreign minister to engage other countries that remain in the nuclear deal.

In a national address from the capital city, Rouhani warned there was only a short time for negotiations, warning that his country could soon “start enriching uranium more than before.” Rouhani, under whom the nuclear deal was signed, accused Trump of conducting psychological warfare against the Iranian people.

British Premier Theresa May said she regrets the US withdrawal from the Iran deal, in a joint statement with Germany and France. May had spoken to Emanuel Macron, the French president and Angela Markel, the German Chancellor, a few weeks ago, affirming that the deal would remain in place.

In a short tweet, the French leader Emanuel Macron expressed that the nuclear non-proliferation regime was at stake.

France, Germany, and the UK regret the U.S. decision to leave the JCPOA. The nuclear non-proliferation regime is at stake.

Netanyahu had recently revealed a trove of documents about the history of Iran’s nuclear weapons program, claiming that Iran lied about its nuclear ambitions, a remark echoed by Trump today.

Under the recently re-elected Vladimir Putin, the Russian regime said it was disappointed at the decision of the White House regarding JCPOA. Russia and China had jointly affirmed to save the deal, last month.

The European Union’s top diplomat has expressed that Europe was determined to preserve the Iran Nuclear deal. Federica Mogherini, the EU’s Foreign Minister, said she expects the rest of the international community to continue implementing the Iran nuclear deal.

The most noticeable figure in the Iran Nuclear Deal was Barack Obama as he was a signatory to the deal, Trump has pulled out from. In his statement, the 44th president termed Trump’s decision ‘misguided’, confirming that there was no violation from Iran.

John Kerry, the former secretary of state – who is believed to have used his channels to save the agreement – said President Trump’s decision weakens our security and breaks America’s word.

He posted a full statement on his Twitter handle:

Although US president walked out of the Iran Nuclear Deal with ease and comfort, the United States might be facing the fallout in future. The most imminent challenge can be the upcoming meeting between the North Korean leader, Kim Jong-un and the US President Donald Trump.

The dates for the historic interaction have not been revealed but the secretary of state, Mike Pompeo has set off to North Korea. The pull out of US, just after three years, can send a message to Korean Peninsula that any agreement made with the US can be revised at any point in time.

Although North Korea has announced to suspend its ballistic missile tests as well as nuclear tests, even then, the decision made by Trump, can raise doubts in Pyongyang.

Pakistan has much stronger credentials for NSG membership than India