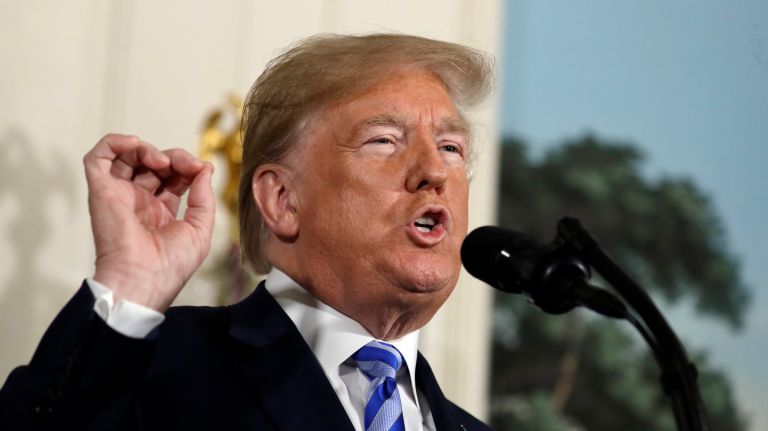 Iran’s atomic chief on Tuesday stated that the country needs only five days to shift its uranium enrichment above 19% that is needed to produce a nuclear weapon. The head of the Atomic Energy Organization, Ali Akbar Salehi made his remarks amid growing tensions between Tehran and Washington.

President Trump has reiterated his distaste for the Iranian nuclear deal; there are increasing chances that he will scrap the deal aimed at halting Tehran’s nuclear program.

Trump has also done little to create goodwill; his mocking remarks on the carnage in Tehran in June hurt the sentiments of the Iranian people

“If there is a plan for a reaction and a challenge, we will definitely surprise them,” said Salehi, who also serves as one of Rouhani’s vice presidents. “If we make the determination, we are able to resume 20 per cent-enrichment in at most five days,” he added.

Read more: Will an assertive Iran turn out to be Trump’s greatest challenge?

These comments have come a week after President Hasan Rouhani lambasted Trump in his inauguration address. Rouhani said: ”Iran could quit the nuclear deal within hours if the US imposes more sanctions.” The statement comes at a time when doubts about the future of the deal have risen. He further went on to say: “Iran has remained and will remain committed to the deal, though any breach of promise by other parties will receive appropriate responses.” Rouhani had earlier vowed for a tit for tat response to any US misadventure.

“Definitely, we are not interested in such a thing happening. We have not achieved the deal easier to let it go easily. We are committed to the deal and we are loyal to it,” said Akbar.

Trump has also done little to create goodwill; his mocking remarks on the carnage in Tehran in June hurt the sentiments of the Iranian people

Iran had given up its highly enriched uranium (HEU) as part of the deal, which according to analysts severely hampered the ability of Iran to dash into the club of nuclear states. Trump, however, has been continuing his anti-Iran rhetoric. He has been particularly raising the verbal diatribes against Iran ever since the Riyadh Summit.

The US has accused Tehran of stoking violence in the region and has called upon other nations to counter that country. Iran is chastised for its support for the Assad Regime in Syria, Houthis in Yemen and Hezbollah in Lebanon. Iran’s fight against ISIS in Syria and Iraq is discarded as an effort to extend its regional influence.

Detractors of the deal, however, assert that there are no mechanisms to hurt Iran’s ability to ramp-up from LEU to HEU. Iran, however, has maintained that it is adhering to the clauses of the deal, something which Trump ratified half-heartedly. However, Trump with his overly anti-Iranian stance has other ideas. “It’s a lot easier to say that the Iranians are complying … But, yeah, I would be surprised if they were in compliance,” Trump told Wall Street Journal a few weeks ago.

The country still has the ability and propensity to go nuclear, which makes the survival of the deal immensely significant

The sanctions limit Iran’s nuclear ambitions, not its ballistic missile program, its alleged support for terrorist groups, or the regime’s human right violations. Iran has protested that the new sanctions are a way to browbeat the country, something which is unacceptable. In response, Iran’s parliament passed a bill outlining plans to “counter US terrorist measures in the region.”

Trump’s muscular diplomacy and his singular focus on the Iranian nuclear program is strengthening the voices of hardliners in Iran, who still castigate the ‘moderate’ Rouhani for cracking a deal with ‘satanic’ America. The Iranian regime is known for its defiance; attempts are afoot to bring about a regime change in Iran as hinted by Mattis and Tillerson over the past few months.

Iran is chastised for its support for the Assad Regime in Syria, Houthis in Yemen and Hezbollah in Lebanon

The economic dividends of the deal have not trickled down well and are outweighed by rising US jingoism against Tehran. The country still has the ability and propensity to go nuclear, which makes the survival of the deal immensely significant.

Trump has also done little to create goodwill; his mocking remarks on the carnage in Tehran in June hurt the sentiments of the Iranian people. If anything, the people will be supportive of anti-US actions, should the regime take them; by the looks of things, it seems highly likely.

Ashraf Shad: A traditionalist writer in a world full of ‘pop-lit’ figures

Trump Team’s Dark View of Islam: Where its coming from?