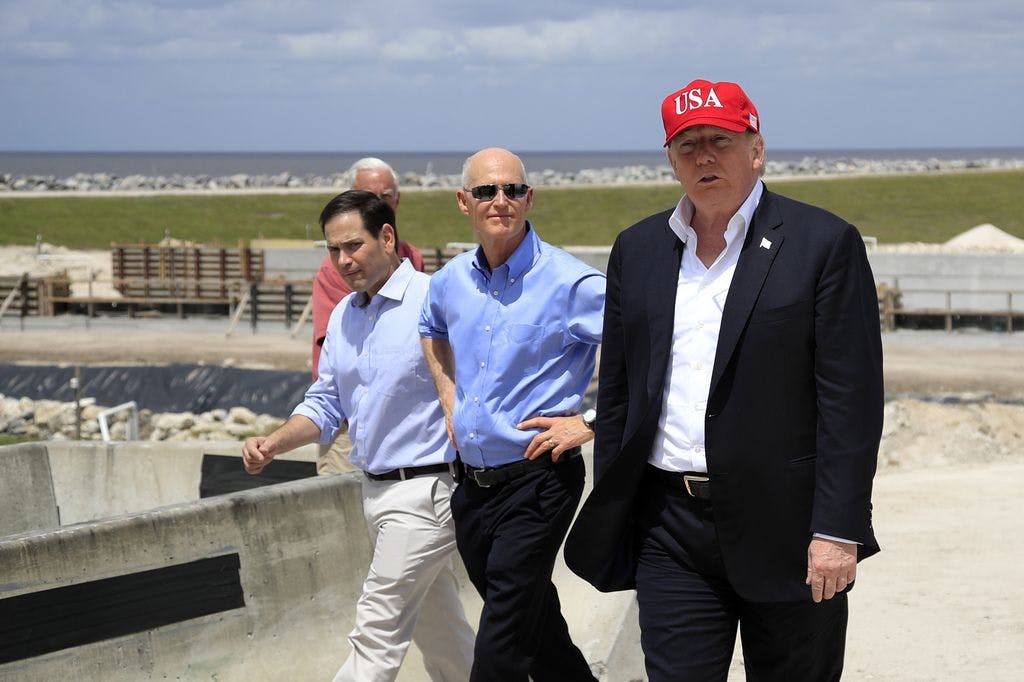 Donald Trump, the 45th President of the United States, has taken a strong, hostile stand to the possible failure to fulfill his proposed Mexico wall. He stated that if the Congress fails to meet his funding demands, he might shut down the government. . He made the outlandish remarks at a campaign rally in Washington, Michigan, on Saturday and set the deadline of September 28th, after which, he announced to ‘close down the country’ citing security concerns.

Trump mentioned the plight of Central American migrants as one of the reasons for strong border security but his deadline has a special meaning attached to it. This is due to the fact that in November, the United States is conducting the mid-term elections for the Senate, which comprises of 435 members of House of Representatives and 100others who serve in the U.S. Senate.

The November polls are scheduled for 435 House Seats and 34 Senate seats. With this in mind, the Republicans are currently in majority, and want to retain the hold. This means that Trump is unlikely to get support for his shutdown plans. Currently, the Republicans hold 238 House seats, while the Democrats have 192, therefore, the latter needs 23 seats more seats to steer the House. For the Senate, the Democrats stand at 26 out of 34 in terms of seats and they need two more for taking reins of the chamber.

Looking at the trajectory of decisions taken by Trump, from the Muslim travel ban to pulling out of the Paris Climate Change Summit and changing stance on the Iran nuclear deal, it is expected that the U.S. leader can actually shut down the government.

Donald Trump’s blunt statements can cost him heavily in the upcoming elections as his approval rate is merely 44 percent, according to Fox News. During his campaign, Trump initially announced to take funds from Mexico to build the wall, however, the President is now looking towards the Senate, demanding the money for the wall which ‘has started’. Last month, the tycoon-turned-president signed a $1.3 billion bill, which is enough to pump money into the government budget until September.

Nonetheless, the next bill might not sail through the Oval office, considering Trump’s warning. Although Trump is still adamant about building the wall despite criticism, his plan dates back to the announcement of his candidacy in June 2015, when he made a speech at Trump Tower in New York. “I would build a great wall, and nobody builds walls better than me, believe me, and I’ll build them very inexpensively, I will build a great, great wall on our southern border.

And I will have Mexico pay for that wall,” the President had said in his speech after he accused Mexicans of being criminals and rapists. The proposed 2,000-mile border will cost huge sums of money, for which the White House had sought $18 billion from Capitol Hill, in January. However, the total spending, including the border security, comes out to be $33 billion. Although the Mexico border idea popped up in 2015, the plan, if executed, would be complete by 2027 –  three years after the completion of Trump’s second final, provided he is able to secure that.

Recently, when Trump reiterated, in January, that Mexico will be accountable to pay for the wall, bringing North Atlantic Free Trade Agreement in the debate, the Mexican President rejected the idea in the same month. President Enrique Pena Nieto also gave an emotional spin to the proposed wall, saying Mexico does not believe in walls. The strategic thinkers and political observers initially chided Trump for having proposed the idea, they were left awestruck when U.S. Customs and Border Protection announced, in September 2017, that construction on the eight wall prototypes had begun in San Diego, a city on the Pacific coast of California.

Trump’s Mexico border plan can land him in to serious trouble as his ‘shut down’ warning can popularize Democrats, who will go on to capitalize it to their advantage in the November polls. Consequently, a Democrats-ruled Senate can open multiple probes against Trump, especially since, Democrats have already filed a lawsuit in a federal district court in Fort Worth, Texas, alleging Trump of colluding with Moscow to secure victory in 2016 presidential polls.

Looking at the trajectory of decisions taken by Trump, from the Muslim travel ban to pulling out of the Paris Climate Change Summit and changing stance on the Iran nuclear deal, it is expected that the U.S. leader can actually shut down the government. In light of this the only obstruction in his path can be the November polls and the Democrats probable victory.

Alice Wells ‘not so important’ visit to Pakistan