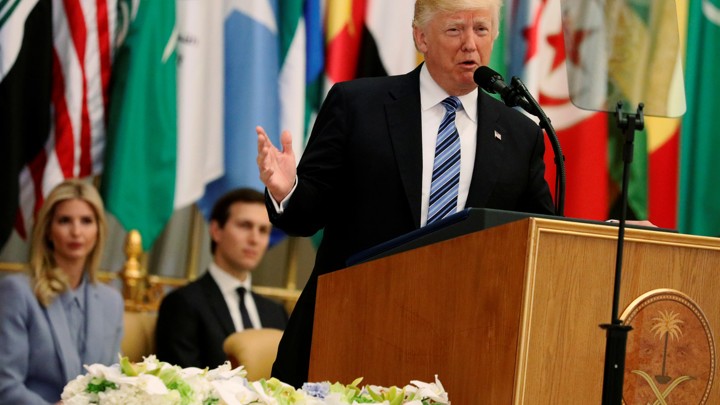 The Saudi Arabian government didn’t do well to schedule US President Donald Trump’s speech at the Arab-Islamic-American Summit at Riyadh for May 21. Just a day earlier, the headlines in the world media were all about a unique event in the Muslim Middle East – free and fair elections in Iran which enabled the moderate reformist President Hassan Rouhani to secure a second term by beating an opponent who was widely seen as representing the religious establishment.

At the end of the day, Trump settled for a policy to “isolate” Iran and to “pray for the day” when Iran will be an agreeable partner. There was no itch to confront Iran or attack Iran.

Trump would have understood the awkwardness of his position. He was obliged to show gratitude to his Saudi hosts who propose to spend $350 billion in the US economy that would create hundreds of thousands of new jobs for the American people. On the other hand, he was expected to condemn and pillory what is, arguably, the one and only democratic country in the Persian Gulf – Iran.

Trump ended up saying the irreducible minimum regarding Iran:

“We are closely coordinating our efforts in terms of how to counter Iran’s extremism… in particular its support for foreign fighters… its support of militia not just in Yemen but in Iraq and in Syria.”
– Rex Tillerson

At the end of the day, Trump settled for a policy to “isolate” Iran and to “pray for the day” when Iran will be an agreeable partner. There was no itch to confront Iran or attack Iran. If a benchmark is needed, go back to George W. Bush’s famous ‘axis of evil’ speech regarding Iran in January 2002.

Indeed, the so-called Riyadh Declaration issued after the Arab-Islamic-American summit of 50 countries on Sunday contained much harsher language regarding Iran, but then, it is essentially a Saudi document, which the regime drafted exercising its prerogative as the host country. By no means, is it a statement reflecting the Iran policy of the US or of the other 48 statesmen who gathered in Riyadh, including from Egypt, Pakistan, Oman and so on.

Equally, it was also apparent from the noticeably restrained moderate remarks regarding Iran by the US Secretary of State Rex Tillerson in the two joint press conferences with Saudi FM Adel Al Jubeir that the Trump administration took care not to exacerbate tensions with Iran. Jubeir spewed venom, but Tillerson simply listened. In his prepared statements regarding terrorism, interestingly, Tillerson did not even mention Iran. The ‘operative’ part of Tillerson’s remarks during the Q&A can be reproduced as follows:

In sum, Tillerson recapitulated the Obama administration’s policies toward Iran. No threat of war – ‘all-options-are-on-the-table’, etc. – no threat of regime change, no containment strategy. On the contrary, the subtle emphasis has been on the terms of engagement with Iran someday in a conceivable future.

The bottom line today is that without Iran’s cooperation, the US cannot get very far in the war against the ISIS, al-Qaeda and other extremist groups in Iraq and Syria.

Thereupon, Tillerson dropped a bombshell. The following was his answer when he was asked by a journalist, “Will you ever pick up the phone and call Iran’s foreign minister? Have you ruled out diplomacy with Iran?”:

Well, in terms of whether I’d ever pick the phone up, I’ve never shut off the phone to anyone that wants to talk or have a productive conversation. At this point, I have no plans to call my counterpart in Iran, although, in all likelihood, we will talk at the right time.

Tillerson said effectively that the US hopes to engage with Iran “in all likelihood”. It is no small matter that he said this from Riyadh while summing up what has been an extraordinarily successful visit by Trump in pursuit of his ‘America First’ doctrine.

Of course, the US-Iranian relations will remain highly problematic. But then four years is a long time in politics – and both Trump and Rouhani have that much time in hand. One can anticipate that Tehran will be savvy enough to sense the vibes from Riyadh and accordingly plot the road map ahead in its dealings with the Trump administration.

Do not forget that Bush’s ‘axis of evil’ speech in 2002 notwithstanding, Washington and Tehran had already got into a waltz in Iraq circa 2005 in a coordinated enterprise to advance Shi’ite empowerment in that country. Both the US and Iran knew the ground rules and the ‘red lines’ in Iraq, and they largely respected them in a co-habitation in mutual interests that was truly exceptional in contemporary world politics.

The bottom line today is that without Iran’s cooperation, the US cannot get very far in the war against the ISIS, al-Qaeda and other extremist groups in Iraq and Syria. To be sure, there will be a lot of jostling for space and influence but a US-Iran confrontation is not on cards. Neither side is seeking it.

Qatar suspends travel from 14 countries including Pakistan, amid coronavirus fears