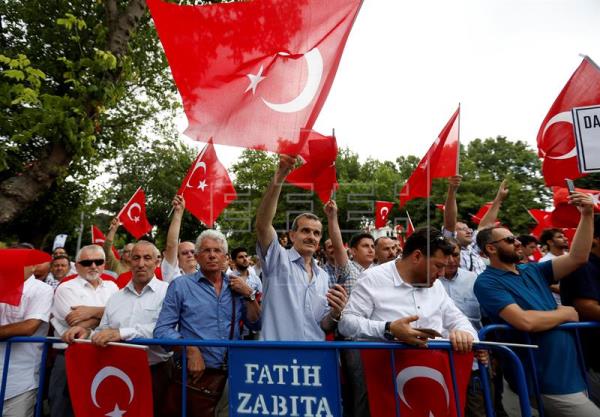 A year ago, on the same date, Turkey witnessed a disastrous military coup. Some junior military leadership, over their disagreements with the incumbent president and the government, executed a military revolt against the Recep Tayyip Erdogan’s government with tanks, warplanes, and helicopters. The coup plotters declared their seizure of power on the state broadcaster, bombed the country’s parliament and other key locations, and raided an Aegean resort where Erdogan had been holidaying.

Within few hours after the murky game started, almost 265 people lost their lives on the streets on Ankara. Eventually, the coup was curbed and many rebellions were arrested when thousand of people came out their homes and marched to protect their liberty and democracy. Erdogan government has arrested anyone having links with Fethullah Gulen, a cleric and an accused mastermind of the failed coup, living an exile in the Pensylvania, United States.

More than 50,000 people have been arrested and some 100,000 public employees sacked for alleged links to Gulen and other terror groups.

Today, as the Turkish nation marks one year of failed coup, thousands are expected to turn out for “national unity marches” in Istanbul and Ankara over the weekend. Speeches will be delivered in the parliament and at the iconic Bosphorus Bridge, now called the July 15 Martyrs’ Bridge, where President Recep Tayyip Erdogan will unveil the “Martyrs’ Memorial” to remember those who died in the coup.

In the aftermath of the coup attempt, Turkey declared a state of emergency that has been in place for a year, which has allowed the government to rule by decrees. More than 50,000 people have been arrested and some 100,000 public employees sacked for alleged links to Gulen and other terror groups.

Interestingly, posters in support of Turkish democracy have erupted in Lahore yesterday, with pictures of failed coup. A ”business association” MUSIAD (Independent Industrialists’ and Businessmen’s Association) came forward with these banners.

JIT report submitted in the Supreme Court has started a chain reaction of troubles for the Prime Minister Nawaz Sharif and his family. PML (N) leadership deems that JIT report is a plot orchestrated by foreign hands, the military establishment and the PTI chairman.

Their confusion did not stop here; Federal Minister for Planning and Development Ahsan Iqbal, in an interview with a local publication, alleged that Pakistan Tehreek-i-Insaf Chairman Imran Khan was following Turkey’s Fethullah Gulen’s model to destabilize the government. He failed to realize that Erdogan did not has money laundering, forgery, tax evasion and other criminal allegations.

In 1999 military coup against the Nawaz Sharif’s government, no one came out to the street to protest or resist and finally General Musharraf declared martial law.

US-Taliban talks: As hopes rise of a deal, what comes next?

Transgender kids feel as much like girls or boys as non-trans children: study

Iraq sentences two Europeans to life for IS membership