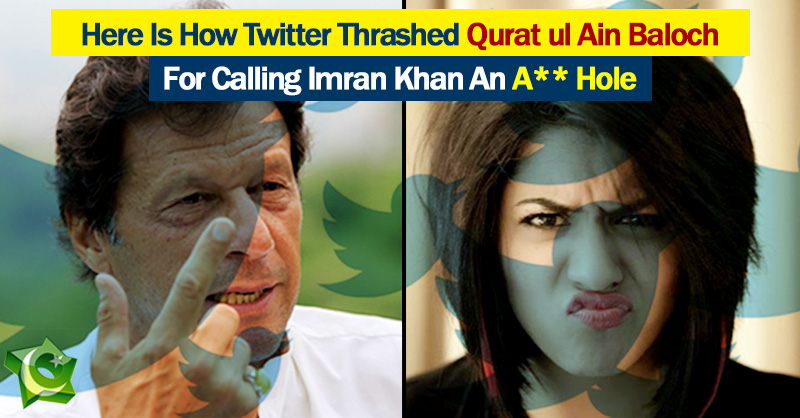 Popular singer Quratulain Baluch has landed herself in hot water after she abused Pakistan Tehreek-i-Insaf chairman Imran Khan in her tweet on Tuesday. The singer called Imran Khan an ‘ass-hole’.

#QuratulAinBaloch
So sad…sorry Bibi you don’t deserve a status of being loved. You better apologize. You blamed someone who is fighting a war for common Pakistani and fight corrupt..IK is a Hope and he is for all of us & you just insulted yourself.u hurt,

Report Quratulain baloch as fast as you can , we have to make sure her acount gets ban #QuratulainBaloch #ReportQuratulain

So, after Hania & Sharmeen I was wondering who gonna be next to make an attempt in order to seek some attention and here we got another attention seeker @Quratulainb who called a national Leader “Asshole” over allegations which are not even proved. #QB#QuratUlAinBaloch

She passed these remarks over Al-Jazeera’s short documentary featuring Ayesha Gulalai and her recent claims of encountering harassment from Imran Khan. Gulalai, the female parliamentarian from PTI claimed she has received multiple objectionable messages from the party chairman Imran Khan.

This was one of the biggest controversies that emerged in the past year in Pakistan. These allegations caused her to face an immense backlash from society. She was grilled for making false accusations. Quratulain Baluch is now facing similar comments on social media.

Back in 2013, Baluch openly supported Imran Khan and his party in the general elections.

The singer has definitely damaged her reputation as many have advised her to get her facts straight before making irresponsible comments.

Baluch has not yet responded to the criticism. People are now expecting an apology from her.

Many commentators have expressed their disappointment regarding the unabated use of abusive language while criticising a senior political figure like Imran Khan.

Read more: How to slow down aging – naturally!

They have pointed out that not only regular people but the celebrities of our society too are unfortunately following this terrible trend.

Let’s think of ending Afghan war, not winning it: Ghani