U.S will confront Russia about its role in Afghanistan 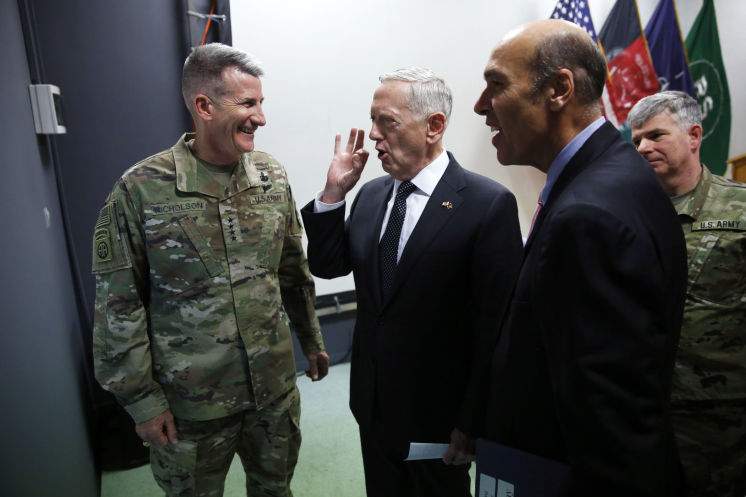 The seething US-Russia rivalry in Afghanistan took a sharp turn with the explosive threat held out by the visiting US Defense Secretary James Mattis in Kabul on Monday that Washington “will confront Russia” for violating international law by sending arms to the Taliban. Mattis said this while answering what appears to have been a planted question by a Washington Post correspondent who asked him about Russian weapons “showing up in Taliban hands in Helmand, Kandahar and Uruzgan” (provinces bordering Pakistan.)

General John Nicholson, US commander in Afghanistan, who stood beside Mattis refused to refute the reports on Russian weapons but couldn’t provide details either. He merely noted, “We continue to get reports of this assistance.” However, Mattis went ahead nonetheless to threaten Moscow:

“Russians seem to be choosing to be strategic competitors in a number of areas.  The level of granularity and the level of success they’re achieving — I think the jury is out on that… I would say that we will engage with Russia diplomatically.  We’ll do so where we can.  But we’re going to have to confront Russia where what they’re doing is contrary to international law or denying the sovereignty of other countries.  For example, any weapons being funneled here from a foreign country would be — would be a violation of international law, unless they’re coming through the government of Afghanistan for the — for the Afghan forces.  And so that would have to be dealt with as a violation of international law.”

What accounts for such a rhetoric?

This is a dramatic escalation in rhetoric. What accounts for it? Indeed, I can visualize a backdrop with three likely vectors. (After all, Mattis is reputed to be a “thinking general” himself.) First, of course, the immediate context of his visit was the devastating Taliban attack on the Afghan army corps headquarters in Mazar-i-Sharif in which 200 soldiers were killed, leading to the exit of the Afghan defense minister and army chief.

Although there was no American casualty as such, it was a big blow to the Pentagon generals, who constantly claim to be doing a masterly job in the “capacity-building” of Afghan armed forces. Simply put, Mattis and Nicholson probably tried to change the narrative.

Read more: After last week’s visit to the USA: China now going to Russia to clear up matters?

Russia’s regional initiative to kick-start a political process in Afghanistan must be driving the Americans crazy.

Indeed, it wouldn’t have been far from Mattis’ mind that Russian weapons are reportedly “showing up” in Taliban’s hands in Helmand when a deployment of Marines from Camp Lejeune, North Carolina, to that province “quietly” got under way last week, which is the first such deployment of Marines since 2014 when President Barack Obama announced the termination of the US’ combat mission in Afghanistan. The last thing Trump would want is body bags arriving from Helmand (which borders Pakistan’s Baluchistan.)

Second, Russia’s regional initiative to kick-start a political process in Afghanistan must be driving the Americans crazy.

The Pentagon has reason to worry that continued US occupation (military bases in Afghanistan) may become untenable if the political process made headway and a regional consensus favoring intra-Afghan reconciliation sought the restoration of Afghanistan’s sovereignty. (By the way, Taliban representatives based in Qatar traveled to China recently.)

Read more: Syria: Will Russia kneel in front of Washington?

Washington’s biggest worry would be that the Afghan opinion itself may come to view the Moscow-led regional initiative as the best (and only) available platform today to somehow bring the senseless bloody war to an end.

Third, if Mattis’s idiom toward Russia has become distinctly hostile, it is also reflective of the deepening US frustration that Moscow is challenging its geo-strategies across the board – over Iran, North Korea, Ukraine, Turkey, and Syria and so on. The chessboard is increasingly posing a “check-and-checkmate” scenario for the US, which in turn exposes the limits to America’s global hegemony.

US and Russia toss the same blame on each other

Washington’s biggest worry would be that the Afghan opinion itself may come to view the Moscow-led regional initiative as the best (and only) available platform today to somehow bring the senseless bloody war to an end.

Specifically, Mattis might have hit out in the wake of reports that Moscow has drawn up plans to deploy Special Forces to the key battle zones in Syria to vanquish the extremist groups (which enjoy US-Israeli backing). Mattis’ allegation of Russia violating “international law” in Afghanistan becomes curious because that is precisely what Moscow accuses the US of doing in Syria.

Interestingly, there are also a few subplots to Mattis’s press conference in Kabul:

A) He was evasive about President Donald Trump deploying “thousands more” troops in Afghanistan, which was what Pentagon had recommended. Mattis said blithely, “our review in Washington is a dialogue with Secretary [of State Rex] Tillerson and the president and his staff in the White House. And I’d say that we’re under no illusions about the challenges associated with this mission.

B) Mattis parried a direct question as to the US’ war objective in Afghanistan.

Read more: G7 sides with Russia: Unexpected setback to the US?

Significantly, Mattis made his visit to Kabul within a week of the fact-finding mission by NSA Lt. Gen. HR McMaster who reports directly to Trump. The transcript of Mattis’ press conference is here.

A year after the fall of Aleppo, Syria’s Ghouta faces same fate

Pentagon to blame for malicious pursuit of WikiLeaks publisher Assange