Opponents have branded it a "coup" and a "declaration of war" but Johnson claimed it was necessary to allow him to pursue a "bold and ambitious" new domestic agenda. Critics say the aim is to prevent opposition from legislating against Johnson's Brexit deal. 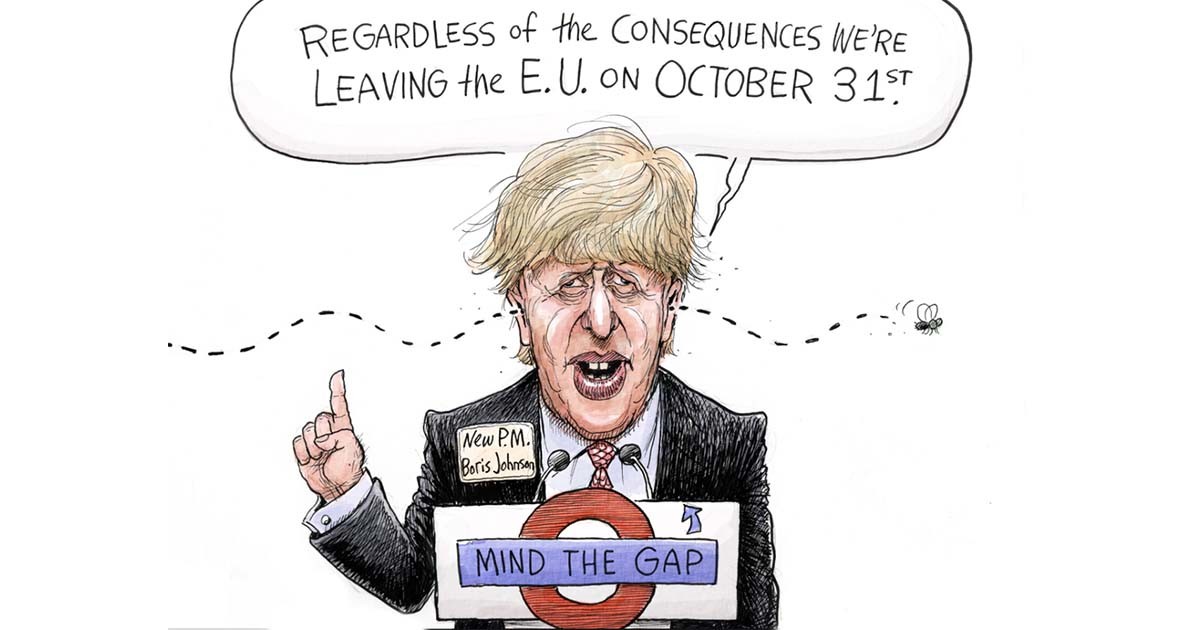 The pound slid on the surprise news Wednesday, which opponents branded a “coup” and a “declaration of war” but Johnson claimed was necessary to allow him to pursue a “bold and ambitious” new domestic agenda. It came a day after opposition parties vowed to seek legislative changes to prevent a no-deal Brexit.

Philip Hammond also pledged to keep fighting against no deal.

Queen Elizabeth II approved the request to end what has been the longest session of parliament in nearly 400 years in the second week of September and reopen it on October 14 — just over two weeks before Brexit.

Thousands of people protested in London, Manchester, Edinburgh and other cities, while an online petition decrying the decision had garnered more than 1.1 million signatures by early Thursday. At the biggest rally, crowds gathered near parliament in London chanting “stop the coup” and waving EU flags.

“Parliament will have the opportunity to debate the government’s overall programme, and approach to Brexit,” Johnson, who leads the Conservative party, vowed in a letter to MPs. However, his decision incensed lawmakers vehemently against Britain leaving the EU without a deal on October 31.

Jeremy Corbyn, leader of the main opposition Labour Party, denounced the move as “a smash-and-grab against democracy” and reiterated he may call a no-confidence vote in Johnson’s government, which commands a majority of just one seat.

Boris Johnson sparked fury among pro-Europeans and MPs opposed to a no-deal Brexit by forcing the suspension of parliament.

Former chancellor Philip Hammond also pledged to keep fighting against no deal. “It would be a constitutional outrage if parliament were prevented from holding the government to account at a time of national crisis,” he said.

US President Donald Trump weighed into the row by praising Johnson as “great” and claiming it would be “very hard” for Corbyn to topple him in a no-confidence vote.

The Labor leader shot back, tweeting Johnson was “a compliant Prime Minister who will hand Britain’s public services and protections over to US corporations in a free trade deal”. In the seismic 2016 referendum on Britain’s EU membership, 52 percent voted in favor of leaving the bloc, a result that has left parliament and the country bitterly divided.

I think what the US president is saying, is that Boris Johnson is exactly what he has been looking for, a compliant Prime Minister who will hand Britain's public services and protections over to US corporations in a free trade deal. https://t.co/kcg2jkYi0o

Read more: Boris Johnson will be Britain’s next PM

Johnson insists Britain must leave by the October 31 deadline — already twice-delayed — with or without a divorce deal from Brussels. Parliament has rejected three times the withdrawal agreement struck between Brussels and the government of Johnson’s predecessor Theresa May.

Opposition lawmakers called it a “blind Brexit” while eurosceptics objected to a so-called “backstop” provision to keep the Irish border open for people and goods, which would keep Britain closely aligned with the EU.

At the biggest rally, crowds gathered near parliament in London chanting “stop the coup” and waving EU flags.

Johnson wants the EU to drop the backstop measure entirely — something Brussels has repeatedly ruled out. In Paris, Britain’s Brexit Secretary Stephen Barclay told a business conference Wednesday the EU would be blamed for a “lack of flexibility” on the backstop issue in the event of no deal.

The government’s chief Brexit adviser David Frost was in Brussels for talks, but an EU summit on October 17-18 will likely determine whether there is any scope for compromise.

If not, Britain will end its four decades of membership without a deal governing future trade relations and citizens’ rights. The pound slumped more than one percent at one point but shares rose as London-listed multinationals stand to gain from a weaker currency.

Scottish First Minister Nicola Sturgeon accused Johnson of acting like a “tinpot dictator” by pushing through an “outrageous assault on basic democratic principles”. Meanwhile, Ruth Davidson, the Conservative leader in Scotland, was set to resign Thursday in part due to opposition to Johnson’s hardline Brexit strategy, according to reports.

More than 70 parliamentarians have launched a fast-track legal bid at the highest civil court in Scotland, aimed at preventing Johnson from suspending parliament. Lawyers for Gina Miller, a businesswoman and leading anti-Brexit campaigner, said they were also challenging parliament’s suspension in English courts.

Johnson wants the EU to drop the backstop measure entirely — something Brussels has repeatedly ruled out.

The prime minister’s move dominated the newspapers Thursday, with The Times saying Johnson had “pushed Britain to the brink of a constitutional crisis” while The Guardian predicted a “historic Parliamentary clash” as his opponents seek to prevent a no-deal Brexit. The Financial Times in an editorial said Johnson’s suspension of parliament “is an affront to democracy”.

Parliament typically goes into recess around the annual party conference season, which kicks off on September 14 and ends on October 2. Robert Craig, a constitutional expert at Durham University, said there was “theoretically absolutely nothing wrong” with the suspension, noting it was normal for a new leader to start a fresh parliamentary session.

“But the reason that it is causing outrage is because it’s reducing the number of available days for parliament to stop a no-deal.” John Bercow, the speaker of parliament’s lower House of Commons, who was not forewarned about Johnson’s suspension decision, labelled it a “constitutional outrage”.

“It is blindingly obvious that the purpose of prorogation now would be to stop parliament debating Brexit,” he said.

Does the PM have the right to suspend parliament?

Prime Minister Boris Johnson’s decision to suspend parliament from mid-September until October 14 — just two weeks before Britain is set to leave the EU — has been called a “constitutional outrage” by critics. But what is the legal standing of Johnson’s decision — and could it make a snap election more likely?

Parliament typically goes into recess around the annual party conference season, which kicks off on September 14 and ends on October 2.

Johnson argues he is merely following convention, in which the prime minister annually prorogues parliament around this time, ahead of spelling out the government’s programme in the Queen’s Speech.

Constitutional experts agreed that Johnson, who only took over last month, was within his rights to make the move.

“This isn’t unusual, this is what happens at the end of every parliamentary session… and you would expect a new government to do this,” Maddy Thimont Jack, an analyst at the Institute For Government think-tank, told AFP.

“There is, theoretically, absolutely nothing wrong with this,” added Robert Craig, a constitutional expert at Durham University.

Islamophobia hits Football Fields; Player targeted for being Too Muslim