Brexit Party and Conservatives in Collusion for 12th December Elections

Populist Brexit Party leader Nigel Farage on Monday withdrew his threat to challenge the governing Conservatives at every seat in next month's general election. 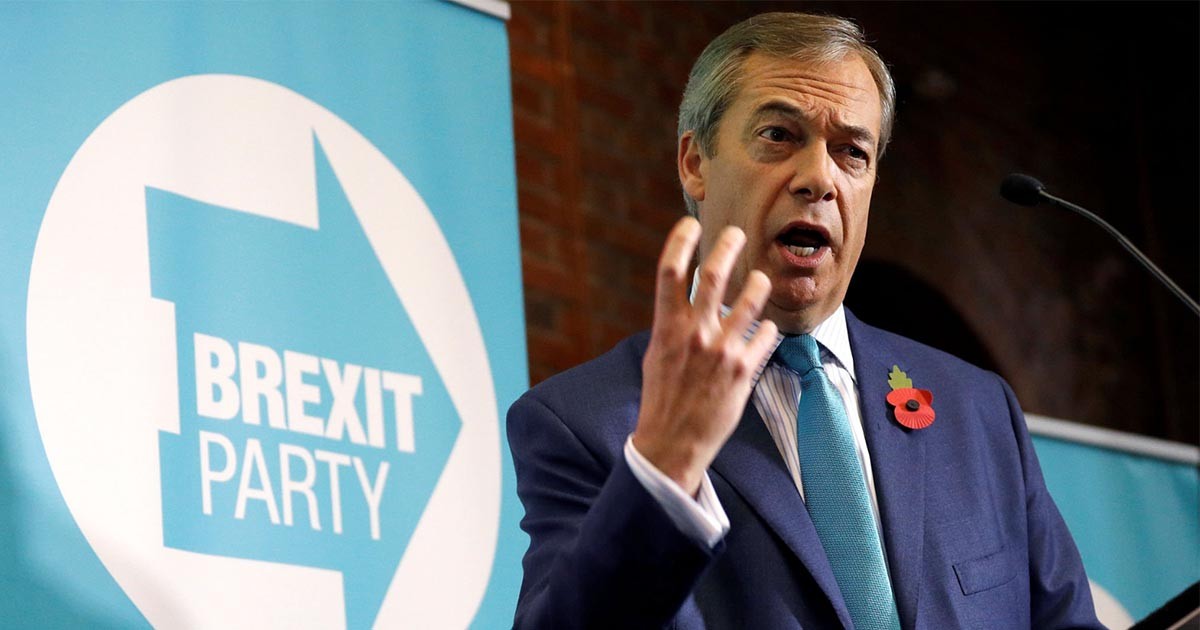 Populist Brexit Party leader Nigel Farage on Monday withdrew his threat to challenge the governing Conservatives at every seat in next month’s general election, in a boost for Prime Minister Boris Johnson.

Farage, a leading force behind the movement to leave the EU, had faced growing criticism that his party could split the eurosceptic vote on December 12, allowing pro-EU parties to seize a working majority and hold a second referendum on Brexit.

BREAKING: "I'm glad that there is a recognition, that there's only one way to get #Brexit done."@BorisJohnson reacts to Nigel Farage's announcement that the Brexit Party won't contest seats won by Tories in 2017.#GeneralElection2019
Get more on #GE19: https://t.co/L4VLnjytVI pic.twitter.com/T5l8qUQhV6

Instead, he vowed to contest hundreds of seats held by pro-European parties and the main opposition Labour Party, including those that backed “Leave” in the 2016 referendum — which could still see him take votes from Johnson’s Tories.

“The Brexit Party will not contest the 317 seats the Conservatives won at the last election,” Farage said on the campaign trail in Hartlepool, northeast England, a Labour-held constituency that voted nearly 70 percent for Brexit.

“(It) prevents a second referendum from happening and that to me I think right now is the single most important thing,” he added to rapturous applause from Brexit Party supporters.

The former leader of the UK Independence Party initially promised to field 600 candidates unless Johnson agreed to abandon the divorce terms he hammered out with Brussels last month.

Farage said the deal, which has yet to be ratified by parliament, would deliver “Brexit in name only”. But the prime minister refused to withdraw the deal, forcing Farage to back down.

By ignoring Tory-held seats and promising to target Labour areas which voted for Brexit, he is seeking to capitalise on disillusionment with the opposition party’s nuanced stance on the issue.

“The Brexit Party and No 10 are denying that a deal has been done”#Newsnight pic.twitter.com/f4G02bZd0V

Labour has promised to negotiate a softer Brexit deal with the EU and then hold a second referendum — a call backed by many smaller parties in the House of Commons — with the option of staying in the EU on the ballot.

Farage was speaking as he campaigned in Hartlepool, a long-time working-class Labour area now being contested by Brexit Party chairman Richard Tice. Labour’s Mike Hill won the seat at the last election in 2017 with a majority of 7,650.

It was formerly represented by ex-prime minister Tony Blair’s chief spin doctor-turned-EU trade commissioner Peter Mandelson and is no stranger to electoral firsts.

In 2002, Hartlepool’s first directly elected mayor was a man dressed in the monkey suit costume of the local football club. He campaigned on a promise of free bananas for schoolchildren.

Property tycoon Tice insisted he will not splinter the eurosceptic vote because the Tories “end up basically being a paper candidate” in constituencies they have not won for years.

Read more: UK will go into an election, but only if EU delays Brexit

“The Brexit party has basically held the Tories to account since we launched,” he told AFP of their election strategy. At the rally, Pat Stamper, 81, a former Labour voter said: “I’m with Nigel all the way. It’s the only way to get out of the EU.”

Sara Hobolt, a political expert at the London School of Economics, said the decision to reduce Brexit party candidates was a boost for Johnson. “This makes a Tory majority much more likely,” she tweeted.

One week ago Donald Trump told Nigel Farage to make a pact with Boris Johnson.

Today, Trump got his wish.

This Trump alliance is Thatcherism on steroids and could send £500 million a week from our NHS to big drugs companies. It must be stopped.

The Conservatives won 317 out of 650 seats at the 2017 election but go into the vote defending only 298, after some MPs were expelled and others defected due to disagreements over Brexit.

Farage’s decision could help the ruling party retain the most marginal of these seats. But these alone are not enough to govern and the Conservatives could be forced to seek parliamentary alliances.

After 2017, the Tories formed an alliance with Northern Ireland’s Democratic Unionists (DUP) to stay in power. But the DUP is now vehemently opposed to Johnson’s Brexit deal, fearing its implications for the British-ruled province.

Johnson himself is also aiming for Labour-held seats to boost his numbers. In areas where Labour and the anti-Brexit Liberal Democrats are strong, the Brexit party “is more likely to take votes from the Conservatives than Labour,” said Tim Bale, from Queen Mary University of London.

Labour accused Farage and Johnson of cooking up an alliance that threatened to “sell out our country” and pave the way for a post-Brexit trade deal that would open the state-run health service to US drugs firms.

Previous articleTrump Says New ISIS Chief in US Crosshairs
Next article‘My Nationality My Dignity’: Lebanese Women Protest To Pass Down Their Nationality

21 September 2021
Previous articleTrump Says New ISIS Chief in US Crosshairs
Next article‘My Nationality My Dignity’: Lebanese Women Protest To Pass Down Their Nationality

Iran: Was the aircraft shot down?

Britain & EU accuse each other of sabotaging Brexit talks