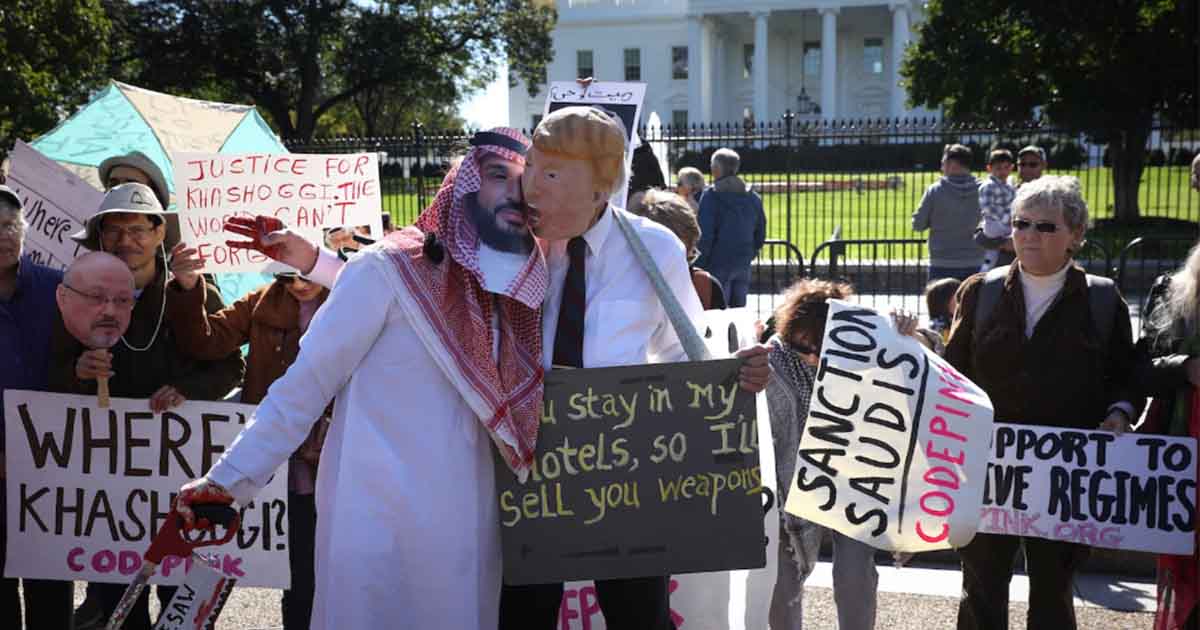 A UN special rapporteur has said the evidence gathered during the inquiry into the killing of Saudi journalist Jamal Khashoggi suggests that the Saudi state is responsible for the murder.

“The evidence gathered by the inquiry suggests that the killing of Mr. Khashoggi constituted an extrajudicial killing, an enforced disappearance and possibly an act of torture for which the state of the Kingdom of Saudi Arabia is responsible”.

“There are numerous theories as to the circumstances of Mr. Khashoggi’s death, but none leads other than to the responsibility of the Saudi Arabia state,” said Agnes Callamard, UN’s special rapporteur on extrajudicial, summary or arbitrary executions.

But of course, they're proposing another round of billions of dollars in arms sales to Saudi Arabia

I’m proud the Senate just voted to block the sales

“The killing was the result of an operation that was carefully planned, involved extensive coordination and significant human resources; that was overseen and endorsed by high-level officials. It was premeditated,” Callamard said.

She said the inquiry further concluded that it cannot be considered a domestic matter only.

“The murder occurred extraterritorially, took place in a consulate in Turkey, motivated by a desire to silence a journalist in self-imposed exile in the United States,” Callamard added.

Callamard said the killing of Khashoggi constitutes an international crime.

“I call on those states to take the necessary measures to establish their competence to exercise universal jurisdiction under international law over this crime,” she stressed.

“The investigation carried out by the Saudi authorities, has failed to address the chain of command.

“It is not only a question of who ordered the killing; criminal responsibility can be derived from direct or indirect incitement or from the failure to prevent,” she said.

There are numerous theories as to the circumstances of Mr. Khashoggi’s death, but none leads other than to the responsibility of the Saudi Arabia state

Establishment of a UN criminal investigation is essential in order for the central questions to be addressed, Callamard said.

She said she travelled to Turkey and held meetings in the U.S., Canada, France, Germany, the U.K. and Sweden and extends her gratitude to the governments of those countries and to all those who have cooperated with the inquiry.

“I requested authorization to visit Saudi Arabia but to date, have received no response,” she added.

Last week, Callamard published a report on Khashoggi’s murder in which she determined it constituted an “extrajudicial killing for which the State of the Kingdom of Saudi Arabia is responsible”.

Among its other recommendations, the UN report calls on the FBI and UN secretary general to launch criminal investigations into the murder of Khashoggi, who was a U.S. resident.

Khashoggi was killed and dismembered by a group of Saudi operatives shortly after he entered the country’s consulate in Istanbul on Oct. 2 last year.

Riyadh offered various, conflicting narratives to explain his disappearance before acknowledging he was murdered in the diplomatic building while seeking to shift blame for his death on a botched rendition operation being carried out by rogue agents.

Khashoggi’s body has not been recovered, and the Kingdom has remained silent on its whereabouts.