Universe brought me to Pakistan & Pakistanis guided me to Islam: Rosie Gabrielle

Journey to Pakistan opened a spiritual gateways for Canadian vlogger, Rosie Gabrielle. A Lone traveler, set out with pain and agony, Gabrielle returned from Pakistan with peace and warmth in her heart. She ended up embracing Islam following her stay in Pakistan. 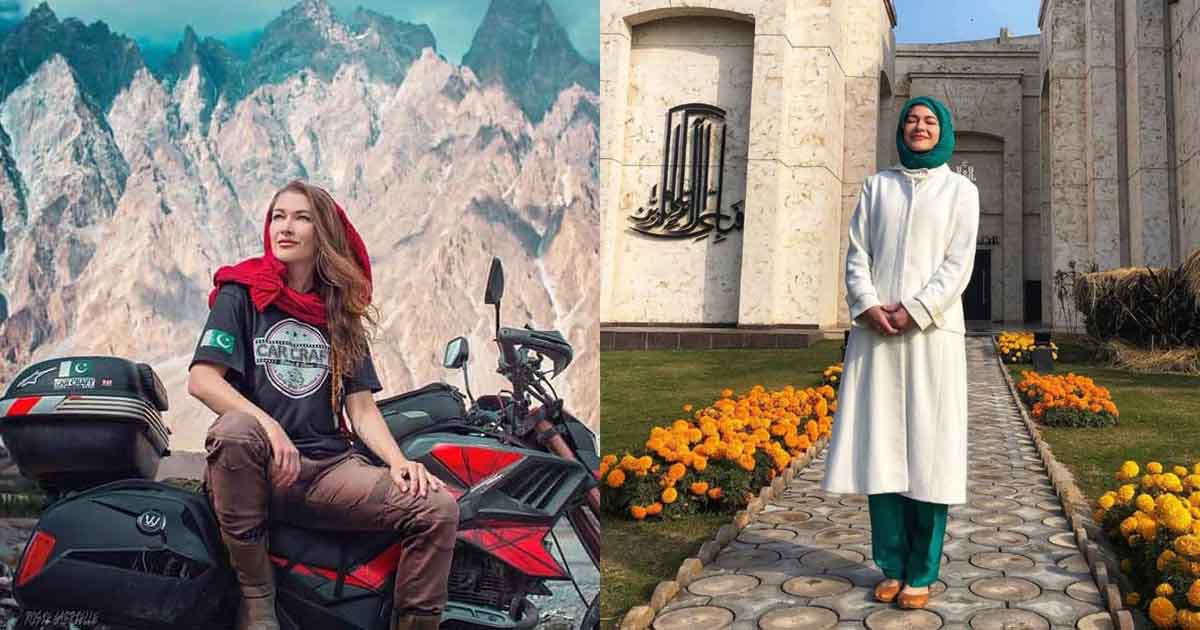 Canadian solo traveler, Rosie Gabrielle, embraced Islam following her long stay in Pakistan last year. Gabrielle posted her image in a white gown and headscarf with Quran in hand. In the caption of the image, she recounted her journey towards Islam.

She asserted that the love and support received in Pakistan helped her to be free from the long-held pain. She traveled from Balochistan to Northern areas during her stay.

In her Instagram post, she narrated that she had denounced her religion four years ago since she did not resonate with what she was brought up with. That marked the beginning of her spiritual journey towards the Creator.

Adding that, since childhood, she had a unique relationship with God. Her life had been far from easy that fraught her with anger and pain. Her stay in Pakistan brought her to the conclusion that even her sufferings were a blessing from God to redirect her on the right path.

She began to travel to have peace, forgiveness and absolve herself from the shackles of grief and anguish.

“The universe brought me to Pakistan, not only to challenge myself to let go of the last remaining traces of pain and ego but also to show me the way. Through kindness and humbled grace of the people I met along my pilgrimage, inspired my heart to seek further,” added the biker.

Read more: Pakistanis don’t let me pay for anything: Binsky, US travel blogger

Rosie Gabrielle asserted that a decade of travel across Muslim countries revealed the true spirit of Islam that is peace, humility, and humanity. But regretted that Islam is the most misinterpreted religion in the world. She added that she was technically a Muslim, her shahada has just redirected her to the path of Oneness.

Twitter erupted with reactions soon after her announcement on Thursday. Pakistani social media users congratulated Rosie Gabrielle on embracing Islam. And, expressed gratitude to her for showing the world an overlooked peaceful image of Pakistan. They hailed her for addressing the misinterpretations associated with Islam across the world.

Congrats to #RosieGabrielle & others who convert to Islam because they find peace& path in this beautiful religion.We as muslims have a responsibility to be better humans &show the world that this is a religion of peace.We should set better examples to diminish misinterpretations pic.twitter.com/8Tjxjp8D90

#RosieGabrielle
⇨ "And whomsoever Allah wills to guide, He opens his breast to Islam, and whomsoever He wills to send astray, He makes his breast closed and constricted, as if he is climbing up to the sky". (Qur'an 6:125) pic.twitter.com/TU2VtfuScq

Meanwhile, a score of foreign travel bloggers has raved about the splendid beauty and hospitality received on their tour to Pakistan. Even, Rosie Gabrielle talked about the warm reception she received from people across Pakistan in her interview with BBC Urdu.

In her captivating videos, she shared her experience of exploring the magnificent and diverse landscape from Pakistan. She spoke about the vivid landscape of Balochistan to the mighty mountainous peaks in the Karakoram region.

Last year, Marsha Jean, 21, a female Chinese traveler visited Pakistan. In her interview with a local media outlet, she stated that initially decided to stay 45 days in Pakistan but extended her stay to six-months after being given immense hospitality.

Read more: Martin Kobler says will return to Pakistan as a tourist

Marsha Jeans said that her visit to Pakistan transformed her perceptions about the country as opposed to a conflict-ridden country.

Drew Binsky, an American travel blogger on his visit to Pakistan cherished the vibrant culture and warmness of the people. Besides the captivating landscape of Pakistan, immense hospitality in Pakistan fascinated him.

He told his billion followers worldwide about the salient features of Pakistan. Adding that the ‘hospitality’ of the people has outclassed other noteworthy attributes of the country.