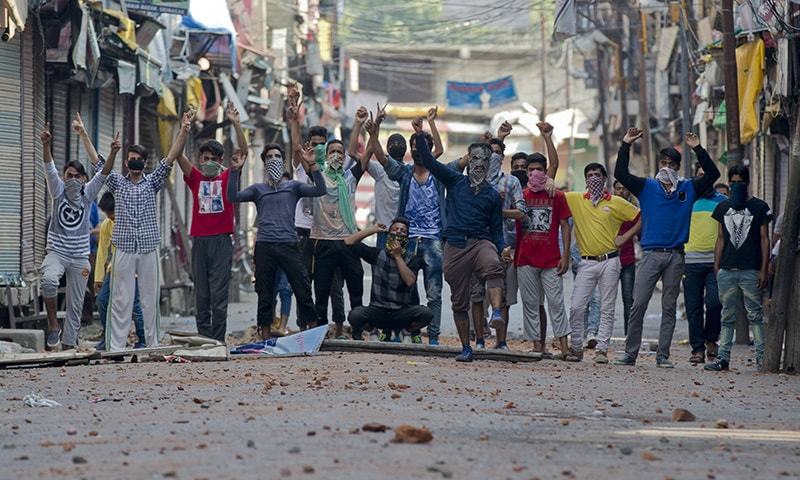 India on Saturday imposed a widespread curfew, cut off all internet services and deployed thousands of troops in Kashmir as the volatile Himalayan region marked the anniversary of a hugely popular rebel leader’s death.

A day earlier, authorities in occupied Kashmir shut down the internet in India-held Kashmir and sealed off the hometown of militant commander Burhan Wani, which had fuelled further unrest across the Himalayan region.

Wani, a commander of the Hizbul Mujahideen, who is best known for appearing on social media in military fatigues to urge young people to join the fight against Indian forces, was killed in southern Kashmir on July 8 last year.

Residents of Indian-held Kashmir said the restrictions on movement were some of the strictest they had seen, with some villagers told they would be shot if they left their homes.

The death of the dashing 23-year-old, who had built up a big following on social media, sparked an outpouring of grief and anger that spilled into the streets and led to months of clashes with security forces. Nearly 100 people died in the months that followed and many more sustained serious eye injuries from the pellet guns used by government forces to quell the protests.

This provided India with an excuse to use force and commit grave human rights violations. Thousands of Kashmiris were killed and detained in Indian military operations.

The current uprising in the occupied Kashmir valley is purely homegrown and is independent of any outside influence or support. In early 1990’s, an armed revolt against the Indian rule ensued which to some extent was supported by Pakistan. This provided India with an excuse to use force and commit grave human rights violations. Thousands of Kashmiris were killed and detained in Indian military operations.

In 2017, however, the situation is very different. No foreign ‘Jihadis’ or ‘terrorists’ are seen anywhere in the occupied valley. The only so-called enemies of Indian state are teenagers pelting stones and waving Pakistani flags. This unarmed struggle by Kashmiri youth against the Indian rule is more threatening for New Delhi.

Read more: Deep inside Kashmir militancy: how damaging can the cracks be for the movement?

The so-called largest democracy in the world has exposed itself by brutally suppressing peaceful protests against its rule in occupied valley. The use of pellet guns, arbitrary detentions, killings and torture is now widely being used by the Indian state to clamp down on dissident voices.

India refused to allow independent observers to enter the occupied valley to investigate these allegations, which has attracted criticism from the international community.

International human right bodies and Amnesty International labeled the atrocities committed by Indian forces as human rights violations and called for independent investigations. India refused to allow independent observers to enter the occupied valley to investigate these allegations, which has attracted criticism from the international community.

The current unrest in Kashmir indicates that peaceful Kashmiris have had enough of decades-long oppressive Indian rule. All sections of Kashmiri population across the length and breadth of the occupied valley are now waging a peaceful struggle against the Indian rule. India is responding by using force and has committed massive human rights violations.

However, these will not stop the Kashmiris to pursue the cause of independence from Indian rule.

Previous articleEdhi: An unforgettable legacy
Next articleThe prospects of Islamabad’s marriage with Moscow

Violent BJP: Naseeruddin Shah kicked out of the literary event amid threats