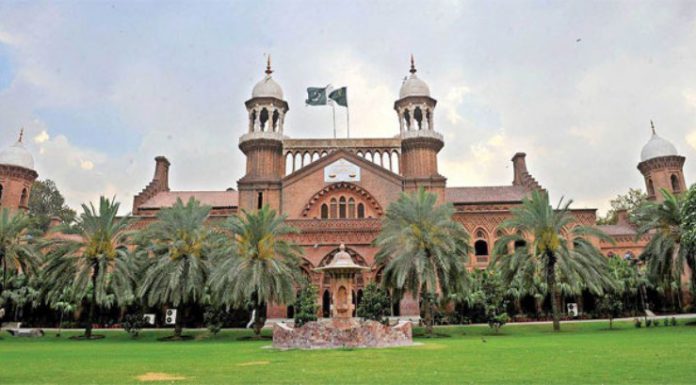 Over the past few weeks, the honorable Lahore High Court (LHC) has been subject of much praise as well as criticism across the social, digital, electronic and print media. And, unfortunately, difference of opinion (between praise and criticism) is split across partisan lines.

On the one hand, criticism of the honorable LHC has mostly been driven by PTI loyalists and (a handful of) idealists who had imagined that the season of accountability would be unforgiving towards forces of status quo that have ruled Takht-e-Lahore for the twenty-five of the last thirty-five years. On the other, praise of honorable LHC has primarily stemmed from PML(N) loyalists and others, who are critical of the NAB actions and had criticized the suo moto jurisprudence of former CJP Saqib Nisar.

Over the past few weeks, the honorable Lahore High Court (LHC) has been subject of much praise as well as criticism across the social, digital, electronic and print media.

Reason? In a quick series of ruling, the honorable LHC has granted substantial relief to PML(N) leaders, almost all of whom had been facing accountability charges (initiated in part by the honorable Supreme Court itself). To understand where this criticism stems from, and why we should all refrain from it, it is important to (first) briefly review some of the recent judgments and orders of the honorable LHC that form the basis of this narrative.

First: granting of bail to Shehbaz Sharif, along with observations made therein. In this regard, by way of background, towards the twilight of Justice (Retd) Saqib Nisar’s tenure as CJP, NAB (along with the honorable Supreme Court) had unleashed a series of investigations against the former Chief Minister of Punjab, along with some of his close associates (i.e. Ahad Cheema and Fawad Hassan Fawad). To this end, on 5th October, 2018, Mr. Shehbaz Sharif was summoned by the NAB officials in Lahore, and subsequently arrested in the case of Ashiana Housing Scheme.

While Shehbaz Sharif barely remained in custody – primarily owing to the production orders of the National Assembly – his arrest much hue and cry throughout our political stratosphere. Nonetheless, the investigation continued, amidst tall claims of widespread corruption. A few months later, on 14th February, 2019 (after retirement of former CJP Saqib Nisar), a division bench of the honorable LHC, headed by the honorable Mr. Malik Shahzad, granted bail to Shehbaz Sharif.

Importantly, through the said bail granting order, the honorable Court made critical observations vis-à-vis the NAB inquiry itself, and concluded that the same was based on mala fide and without sufficient evidence. Second: granting of relief to Hamza Shehbaz. During this time, away from Ashiana Housing scheme, Shehbaz Sharif and his family (pertinently Hamza Shehbaz and Salman Shehbaz) have also been facing other inquiries, including one concerning the accumulation of assets beyond known sources of income.

In a quick series of ruling, the honorable LHC has granted substantial relief to PML(N) leaders, almost all of whom had been facing accountability charges.

In this regard, at different points in time, NAB issued notices to Hamza Shehbaz and Salman Shehbaz, requiring them to appear and answer questions concerning the alleged offence. Upon receipt of such notices, Mr. Salman Shehbaz immediately left Pakistan, and has not returned since. Hamza Shehbaz, on the other hand, appeared before the NAB authorities, while simultaneously exercising his right to seek bail from the honorable LHC. As it turns out, the bail was fixed before the same bench (headed by honorable Justice Mr. Shehzad), and an order (dated 20th November, 2018) was passed, prohibiting NAB authorities from arresting Hamza Shehbaz without first granting “sufficient time of at least ten days”, so as to enable him to approach the Court for possible relief.

Third: granting of protective bail to Hamza Shehbaz on Saturday, April 6th, 2019. In the aftermath of the LHC order that required “ten days” notice period to be given to Hamza Shehbaz, prior to arrest, NAB sought a clarification from the honorable Supreme Court of Pakistan (in the case of Jalil Arshad), as to whether such notice period is required prior to exercise of NAB’s arrest powers (under section 24 of the NAB Ordinance).

To this end, vide order dated 19th March, 2019, the honorable Supreme Court clarified that “no such limitation has been imposed upon NAB” by the law, and that “if sufficient material has been gathered to connect a person to the commission of an offence, obviously NAB can arrest such a person”. Based on this principle, NAB attempted to arrest Mr. Hamza Shehbaz on Friday, 5th of April, 2019. The said arrest was resisted by Hamza (primarily on the basis of political muscle), and on the following day (Saturday), the lawyers of Hamza Shehbaz sought protective bail from the honorable Chief Justice of LHC, in chambers, without appearance of Hamza and without issuing notice to NAB.

Fourth: suspending the de novo investigation of Model Town massacre. Without going into the background details, a petition had been filed (on behalf of the accused) to stop the ongoing (new) investigation being conducted by the PTI government, into the Model Town massacre. The honorable LHC formed a 3-member (Full Bench), to adjudicate the matter. The honorable bench, headed by Justice Qasim Khan, included Justice Malik Shehzad and Justice Aaliya Neelum. While hearing the said case, against all objections raised by the Advocate General Punjab, the Full Bench, through a 2-1 majority (with Justice Qasim Khan dissenting) stayed the ongoing investigation into the Model Town incident.

NAB issued notices to Hamza Shehbaz and Salman Shehbaz, requiring them to appear and answer questions concerning the alleged offence.

This decision, which has also resulted in ancillary issues (such as resignation of the Advocate General), is widely viewed as granting of tremendous relief to PML(N) leadership. Fifth: suspension of Hanif Abbasi’s sentence, and his consequent release on bail. Earliest this week, the honorable LHC, through a bench headed by honorable Justice Aliya Neelum, suspended the life sentence of Hanif Abbasi, in the ephedrine case, and released him on bail. As reported, the prosecution case was wrought with infirmities, and the honorable bench had no option but to release Mr. Abbasi (whose co-accused had already been acquitted by the learned trial court).

These five events (within the span of a few months) have been misconstrued as biased jurisprudence by the honorable LHC, which has historically been accused of harbouring a soft corner for PML(N). However, nothing could be further from the truth. These, and other decisions have all been rendered on merits, through reasoned orders. One can disagree with the reasoning of the honorable Court (as part of our democratic constitutional right), but this right cannot be stretched to malign the court or its motives. Unfortunately, the very people who were criticizing PML(N) during its barrage against the honorable Supreme Court (‘paanch log’), are resorting to similar criticism of LHC today.

Such people must be reminded that we cannot be selective in only supporting the jurisprudence that fulfils our partisan objectives. We either respect the courts, or we do not. And accepting the mandate of our judgments, even when they do not support our partisan proclivities, is the real test of fidelity to the project of justice. Legitimate criticism of jurisprudence aside, our social, digital, electronic and print media must refrain from casting doubts about the motive of our judiciary.

Because once legitimacy of our judicial office bearers erodes (as it did during PML(N)’s criticism of CJ Saqib Nisar’s court), a crumbling of the constitutional edifice will follow. It is time for saner minds to take centre-stage in the narrative concerning the ongoing politico-legal tussles. Only then can we hope to come out of this moment with our dignity and constitution intact.

Saad Rasool is a lawyer based in Lahore. He has an LL.M. in Constitutional Law from Harvard Law School. He can be reached at saad@post.harvard.edu, or Twitter: @Ch_SaadRasool. This article was originally appeared at The Nation and has been republished with author’s permission. The Views expressed in this article are author’s own and do not necessarily reflect the editorial policy of Global Village Space.