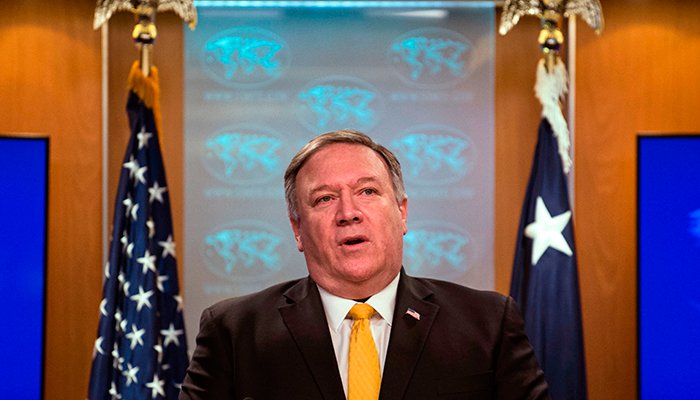 The United States said Friday it would exit a landmark Cold War nuclear missile treaty due to purported violations by Russia, which has warned of a new arms race in Europe. Washington says a new Russian medium-range missile system breaches the Intermediate-Range Nuclear Forces Treaty, although US officials also have an eye on China as the 1987 pact restricts the United States but not the rising Asian power.

President Donald Trump said the United States was suspending its obligations under the INF treaty as of Saturday and starting a process to withdraw in six months. Brokered by US president Ronald Reagan with last Soviet leader Mikhail Gorbachev, the treaty ended a superpower buildup of warheads that had frightened Europeans, banning ground-launched missiles with a range of 500 to 5,500 kilometers (around 300 to 3,400 miles).

US officials say that some 95 percent of China’s ballistic and cruise missiles, a core part of Beijing’s defense strategy, would violate the INF treaty if China were a party to it.

“The United States has fully adhered to the INF treaty for more than 30 years, but we will not remain constrained by its terms while Russia misrepresents its actions,” Trump said in a statement. Secretary of State Mike Pompeo said the United States, which formally announced its concerns two months ago, had raised the alleged treaty violation with Russia more than 30 times.

“Russia’s violation puts millions of Europeans and Americans at greater risk, it aims to put the United States at a military disadvantage and it undercuts the chances of moving our bilateral relationship in a better direction,” Pompeo said.

But Pompeo said the United States was still willing to talk to Russia in hopes that it comes into compliance. Trump, speaking later to reporters, said he would like to “get everybody in a big and beautiful room and do a new treaty,” but in the meantime, the United States “can’t be put at a disadvantage.”

Russian President Vladimir Putin, who has sought a warm relationship with Trump but is widely reviled by the US establishment, has declared that the US withdrawal would set off a new arms race. Foreign ministry spokeswoman Maria Zakharova said Friday’s decision was not about Russia but rather “the strategy of the United States to get out of its international legal obligations in different areas.”

President Donald Trump said the United States was suspending its obligations under the INF treaty as of Saturday and starting a process to withdraw in six months.

Zakharova told television channel Rossiya 1 that the US had provided “no evidence, no satellite photo… no evidence” to back its allegations and that, once Washington leaves the treaty, Russia “reserves the right to an appropriate response.” NATO said in a statement that the US allies “fully support” the withdrawal and agreed that Russia’s 9M729 ground-launched cruise missile systems, whose range is the cause of US concerns, violated the treaty.

But Europeans also voiced fears over the consequences of the treaty’s demise and called on Russia to address concerns before the United States formally leaves in August. “To us, it’s clear that Russia violated this treaty, and that’s why we must talk with Russia,” German Chancellor Angela Merkel said.

EU diplomatic chief Federica Mogherini, speaking as the bloc’s foreign ministers gathered in Bucharest, said that the Europeans did not want “our continent going back to being a battlefield or place where other superpowers confront themselves — this belongs to a faraway history.”

Trump also faced criticism at home, where Democrats said the “America First” president was too eager to withdraw from yet another international treaty. “The Trump administration is risking an arms race and undermining international security and stability,” House Speaker Nancy Pelosi said.

To add further to Europe’s worries, Moscow’s top INF negotiator, deputy foreign minister Sergei Ryabkov, warned that after the collapse of the treaty that another key arms control agreement — the New START treaty — could follow. That agreement, which caps the number of nuclear warheads held by Washington and Moscow, expires in 2021 and Ryabkov said there was a “big question” over what would happen next.

Pompeo said the United States was still willing to talk to Russia in hopes that it comes into compliance.

France, voicing regret over the INF treaty, appealed for the United States and Russia to extend the New START treaty beyond 2021. A US official, addressing reporters on condition of anonymity, rejected the idea that the United States was opening up an arms race and said it would take time to see how Washington would proceed when unbound from the INF treaty.

“Because we have been adhering to this treaty for so long,” the official said, “we are some time away from being in a position to know what we might want to deploy, where we might want to deploy.” While relations remain tense with Russia, US defense planners have put a major focus on China due to its fast-growing military spending and increasing assertiveness in the dispute-ridden waters of Asia.

US officials say that some 95 percent of China’s ballistic and cruise missiles, a core part of Beijing’s defense strategy, would violate the INF treaty if China were a party to it.

US sticks to goal of cutting Iran oil exports to zero