US China Dialogue in Washington: US denies waging ‘Cold War’ 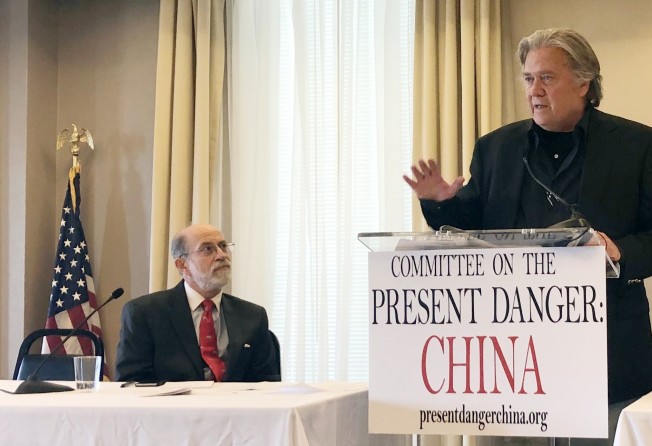 The United States on Friday insisted it was not pursuing a new “Cold War” with China, but the Pacific powers could only paper over deep differences during high-level talks. The defense chiefs and top foreign affairs officials of the two countries met in Washington for a regular dialogue that had been pushed back amid months of spiraling tensions between the world’s two largest economies.

After President Donald Trump’s barbed comments against China in the runup to this week’s congressional elections, Secretary of State Mike Pompeo turned conciliatory in tone if not always in substance. “The United States is not pursuing a Cold War or containment policy with China,” Pompeo told a joint news conference.

Trump has made reaching a denuclearization agreement with North Korea a top priority since his landmark summit in June with the totalitarian state’s leader Kim Jong Un.

“Rather, we want to ensure that China acts responsibly and fairly in support of security and prosperity in each of our two countries,” Pompeo said. But Pompeo also was upfront about US concerns. While the Trump administration has generally been soft-spoken on human rights, at least with allies, Pompeo denounced China’s “repression” of religious and minority groups including the Uighur community, citing a UN report that up to one million members of the mostly Muslim ethnic group have been rounded up in detention camps.

And on Taiwan, while assuring his guests that the United States only recognizes Beijing, Pompeo was increasingly forthright in advocating for the self-ruling democracy, criticizing Beijing’s efforts to isolate the island it considers a renegade province.

The United States also took Beijing’s military to task over its assertive posture in the dispute-rife South China Sea, which has witnessed a series of incidents including the buzzing of a US Navy surveillance aircraft last year by a Chinese warplane.

Talking, but not Agreeing

Defense Secretary Jim Mattis said the talks were “candid” but that the two militaries looked to improve communication and avoid “miscalculation” at sea. “And we made clear that the United States will continue to fly, sail and operate wherever international law allows,” Mattis said.

The United States on Friday insisted it was not pursuing a new “Cold War” with China, but the Pacific powers could only paper over deep differences during high-level talks.

Senior Communist Party official Yang Jiechi, a veteran architect of Beijing’s foreign policy, insisted that China allows freedom of religion and criticized the United States for what he saw as its own “militarization” of the South China Sea. “There is no such problem of freedom of navigation and overflights being obstructed, so to use this issue as an excuse to military action is unjustifiable,” he said.

“The Chinese side made it clear to the United States that it should stop sending its vessels and military aircraft close to Chinese islands and reefs and stop actions that undermine China’s sovereignty and security interests,” he said. The talks come several weeks before Trump is set to meet Chinese President Xi Jinping on the sidelines of a Group of 20 summit in Argentina — a potential occasion for big announcements on resolving disputes.

While the Washington talks focused on security, trade is at the heart of tensions between the world’s two biggest economies. Trump has slapped $250 billion worth of tariffs on Chinese goods, accusing Beijing of nefarious trading practices. Retaliatory measures quickly followed.

Yang voiced hope for a quick resolution. “A trade war, instead of leading to any solution, will only end up hurting both sides and the global economy,” he said. “The door to negotiation remains open. And let’s not forget how our two sides have successfully navigated through previous rough patches in our economic and trade relations,” he said.

But just as he was speaking, a top advisor to Trump, Peter Navarro, vowed to press China hard on trade. Navarro, the head of the White House National Trade Council who is known for his unorthodox economic views, said China had made empty promises to previous presidents and that Trump would not back down.

Defense Secretary Jim Mattis said the talks were “candid” but that the two militaries looked to improve communication and avoid “miscalculation” at sea.

“The game that China has played — and they played people in the Bush administration like a violin — is to do the tapdance of economic dialogue,” Navarro said at the Center for Strategic and International Studies. “That’s all they want to do. They want to get us to the bargaining table, sound reasonable, and talk their way while they keep having their way with us,” he said.

Washington has been especially incensed at what it believes is widespread theft of technology from US companies — a charge that China denies. “How do you have a deal with somebody if they don’t even acknowledge your concern? I mean, it’s Alice in Wonderland,” Navarro said.

Pompeo has previously dubbed China as the primary adversary of the United States, but during the talks called Beijing “essential” in key areas — including North Korea. Trump has made reaching a denuclearization agreement with North Korea a top priority since his landmark summit in June with the totalitarian state’s leader Kim Jong Un.

Yang said that China, North Korea’s main lifeline, would enforce UN sanctions but voiced hope that Washington and Pyongyang “will meet each other halfway” and “accommodate each other’s legitimate concerns.”

Previous articleGeneva after Moscow Conference: US & Russia competing on Afghanistan?
Next articleAfghan Taliban attacks intensify as US peace envoy returns