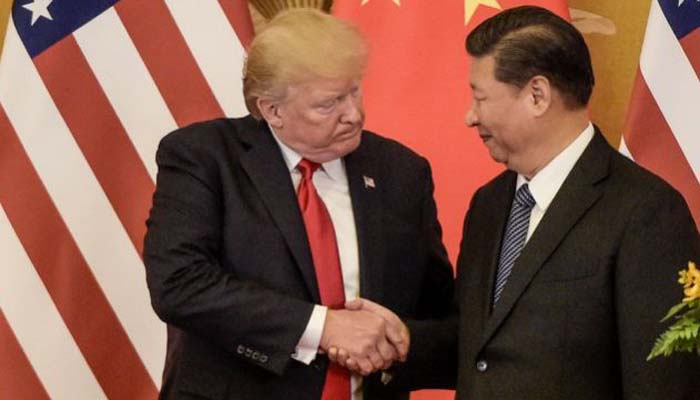 The United States and China resume top-level talks Friday after months of spiraling tension, looking to see if they can find a way forward on disputes from trade to military friction.

Friday’s delayed meeting in Washington comes weeks before US leader Donald Trump is expected to meet his Chinese counterpart Xi Jinping on the sidelines of the Group of 20 summit in Argentina, with both sides hoping they can announce some progress.

“We want to achieve progress on our priorities including North Korea, and China has been a very key player in helping to get North Korea to the bargaining table,” Branstad said.

Secretary of State Mike Pompeo and Defense Secretary Jim Mattis will spend Friday morning with two high-ranking Chinese policymakers, days after a congressional election in which Trump painted China as a bogeyman.

A planned trip by Mattis to Beijing last month was canceled amid rising military tensions between the Pacific powers. But on Friday China’s defense minister, General Wei Fenghe, will visit the Pentagon to a ceremonial honor cordon.

The defense chiefs will beforehand hold talks at the State Department jointly with Pompeo and senior Communist Party official Yang Jiechi, a longtime architect of Chinese foreign policy who formerly served as ambassador to Washington.

The talks will focus on security, but trade is at the heart of tensions. Trump has slapped $250 billion worth of tariffs on Chinese goods, accusing Beijing of nefarious trading practices, prompting retaliatory measures.

While some of the Trump administration’s comments on China have prompted commentators to draw parallels to the Cold War, Terry Branstad, the US ambassador to Beijing, said that Washington was not seeking confrontation for its own sake. “We want this to be a constructive, results-oriented relationship with China. The US is not trying to contain China, but we want fairness and reciprocity,” Branstad told reporters on the eve of the talks.

The Trump administration, while generally soft-spoken on human rights, has taken China to task over its mass detainment of Uighurs, the mostly Muslim minority in its northwest.

Branstad said the talks would consist of “frank, open exchanges” on issues from human rights to the myriad maritime disputes in the South China Sea. “We want to achieve progress on our priorities including North Korea, and China has been a very key player in helping to get North Korea to the bargaining table,” Branstad said.

Trump is seeking a follow-up to his landmark summit with North Korean leader Kim Jong Un, who counts on China as his main supporter. But a meeting due this week in New York between Pompeo and a senior North Korean official was abruptly called off, the latest twist in turbulent diplomacy.

With the occasional exception of North Korea policy, the United States has increasingly seen China as a meddlesome player on the international scene.

In a meeting with former US secretary of state Henry Kissinger in Beijing on Thursday, Xi said it was “noteworthy that negative voices concerning China have been rising for some time in the United States,” according to the official Xinhua news agency. But Xi noted that he had agreed to meet Trump in Argentina, where “the two sides can have an in-depth exchange of views on issues of common concern.”

China, Xi said, “is still committed to the building of a relationship with the United States that features no conflicts, no confrontation, mutual respect, and win-win cooperation.”

Beijing, after initially denying the detention camps, has described them instead as vocational training centers that discourage religious extremism.

Washington has been especially incensed at what it believes is widespread theft of US technology a charge that China denies. Xi recently wooed investors by pledging action to encourage imports, while Foreign Minister Yang Yi has insisted that China is not trying to dethrone the United States as the pre-eminent power.

The Trump administration, while generally soft-spoken on human rights, has taken China to task over its mass detainment of Uighurs, the mostly Muslim minority in its northwest. A recent UN report said that as many as one million ethnic Uighurs are being kept in extrajudicial detention, some simply for outwardly practicing Islam.

The Uyghur Human Rights Project, a Washington-based advocacy group that uses an alternative spelling for the ethnicity, urged the United States to raise the detentions in Friday’s dialogue, saying it was important to show a “unified” global message. Beijing, after initially denying the detention camps, has described them instead as vocational training centers that discourage religious extremism.