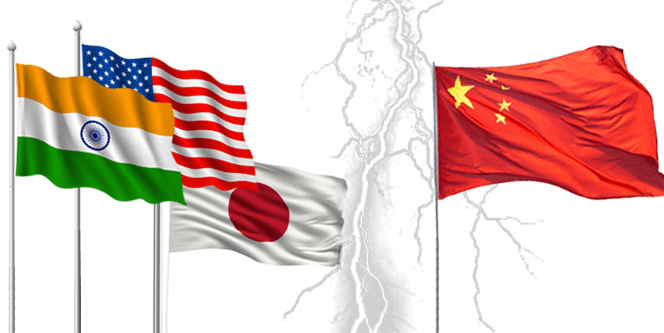 The US-China rivalry and their quest to mark their sphere of influence have entangled states in a dilemma – which side are they on? While many states are attempting to maintain a balance in their relations with either side, India and Japan seem to have shown an inclination towards the US, given their pro-US bias to counter mutual rival China.

China is viewed as a security threat by New Delhi and Tokyo due to somewhat similar historical challenges and complications over territorial claims and administration. In both their cases, no other statement could summarize the situation better than ‘the enemy of my enemy is my friend’.

Japan and China are caught in tango over territorial claims over Senkaku/Diaoyu islands – five islands in the East China Sea. While the islands themselves are uninhabitable, the waters surrounding them hold greater strategic significance in terms of control of sea, fishing and energy resources, and most importantly, military imperatives.

China has laid claim over the islands since the Ming (1368-1644) and Qing (1644-1912) dynasties, while according to Japan, the islands were ‘occupied’ in 1895 during the Sino-Japanese war. Japanese laws state that the occupation is considered a legal way of acquiring a territory under international law, while China stresses that Japan cannot occupy an uninhabited Chinese territory.

This matter of historical dispute over sovereignty between China and Japan, in the present day, has turned into renewed geopolitical tensions in the South China Sea that have engulfed the US into the matter. Japan has had US support on the matter, and the new US administration has reaffirmed its commitment to defend Senkaku, signaling an unwavering US commitment to Japan to caution China.

In 2020, China and India became embroiled in an intense border standoff in Galwan Valley that left 20 Indian soldiers dead. Since the Line of Actual Control (LAC) is poorly demarcated and rests on rivers, lakes, and snow-caps causing the line to move every other season, tensions flare up regularly between the two states.

Although there have been transgressions on the LAC in the past, this was the first time in 45 years that such a deadly clash took place in the Ladakh region. The relations between China and India further deteriorated after the incident when the Indian public called for a boycott of New Delhi’s largest trading partner. This rift between China and India, nonetheless, brought Washington closer to Delhi. The present conflict of interest with Beijing has pushed New Delhi and Tokyo into the anti-China camp with the US.

India hides behind the United States in a tug-war with China as the US supports the emergence of India as a leading global power. In 2019, the US affirmed India’s status as a major defense partner during the 2+2 Ministerial Dialogue in Washington.

The US supports India with the expectation that India will play a cooperative role as a vital partner to ensure US domination in the Asia-Pacific region, and enhance its maritime security to curtail China’s activities in the region.

India is committed to the US cause as not only is it receiving military support to push back China, there are also more than 30 bilateral dialogues and working groups that span various aspects of India’s development and modernization plans in space, energy, high-end technology trade, as well as the health sector amid the pandemic.

These agreements depict cooperation between India and the US and strengthen their alliance against a mutual rival. That, in turn, reassures India that the US is a better alternative to China as the scope of growth of mutual defense ventures, that favor India’s regional hegemonic desires, are much broader.

Bilateral Ties between the US and Japan

Like India, the cornerstone of Japan’s relationship with the US is based on security arrangements to offset China.

After the Cold War, in 1960 US-Japan signed a Security Treaty, and 2020 marked the 60th anniversary of their security alliance. Moreover, the two states also revised the US-Japan Defense guidelines to expand and enhance security-oriented cooperation to counter Chinese influence.

They are also working to promote the integrity of information and communication technology to ensure secure transmission over 5G networks. Their collaboration also falls in domains of science and technology, international space exploration, and expanding people-to-people relations as a counter option to China.

Such a broad-based alliance demonstrates the US’ attempt at rebalancing power in the Asia-Pacific region in light of its rivalry which is broadly understood as a reaction to China’s rise.

Mutual Effort: US, India, and Japan

To break the Chinese spell in the region, Japan and India are also participating in joint military exercises with the US; therefore, the US-China rivalry has impacted India and Japan.

Japan-US started their Keen Sword air, sea, and land military drills that are being held every two years since 1992, in October 2020. This drill included 46,000 military personnel and dozens of warships and hundreds of aircraft, and for the first time saw the use of electronic and cyber warfare training.

The exercise is indicative of increased US-Japan military cooperation to counter China near the disputed Islands. Similarly, US-India along with Japan and Australia are engaged in Malabar Exercises, which is a multilateral naval exercise, to increase maritime security of the Indian Ocean.

The US-China rivalry has had a great impact as it has lead to the US strengthening its informal strategic alliance with Japan, India, and Australia under the Quadrilateral Security Dialogue (QUAD) amid deteriorating Beijing, Delhi, and Tokyo ties. These states see the potential in this partnership as a bulwark to monitor China’s activities in the East and the South China Sea and the Asia-Pacific region.

Both India and Japan have not only increased their military dependence on the US to counter China, but they are also looking to accelerate weapons purchases.

Indian defense procurement from the US hiked to $3.4 billion which is a sharp increase from zero in 2008. While 90% of Japan’s defense imports come from the US, Japan has also expressed interest in interoperable technology, two missile defense radar sites, and an F-35 joint strike fighter. The US has also approved some $20 billion military sales to Japan.

Such endeavors highlight how the US is doing its utmost to expand and operationalize its power alliance against China.

Scope of Cooperation and De-escalation with China

Despite lingering tensions between China, India, and Japan, there are still chances of stabilizing relations between these states. Japan and China have now established quick means of communication under a military hotline to avoid escalation of maritime tensions accidentally.

In late 2018, Prime Minister Abe visited Beijing for a state visit with President Xi Jinping. This meeting was a first of its kind since relations between the two states ruptured in 2011. Moreover, the two sides also agreed to hold regular meetings of defense officials.

Likewise, India and China have met several times after the border clashes to resolve their dispute. The Foreign Ministers of Russia, China, and India met in Moscow on the sidelines of the SCO meeting held in September 2020 with the hope to defuse border tensions.

Most recently on 6th November last year, the 8th round table of the India-China Corps Commander Level Meeting was held, where the two sides agreed to ensure that their frontline troops would exercise restraint and avoid misunderstanding and miscalculations.

Although many concerns still remain unresolved, both pushed for settlement of outstanding issues and continuation of further talks for peace in the disputed region. This is a sure sign that both countries wish to neither escalate tensions with China nor engage in any serious military confrontation, which may prove catastrophic.

The bilateral relations between US-India and US-Japan seem to be hitting high notes; there is an asymmetry in their arrangement. While the US-Japan alliance has moved towards a more balanced and coordinated security partnership, India lags behind. This asymmetry suits the US as being powerful it can influence India. However, what actions India is willing to take to make a substantial or direct contribution to the US interest in the region and to satisfy its asymmetric expectation remains to be seen.

Maheen Shafeeq is a researcher at the Centre for Aerospace & Security Studies (CASS). She is a graduate of the University of Sheffield and holds a Master’s degree in International Relations. She can be reached at cass.thinkers@gmail.com.

Tracing the roots of BLA in the backdrop of PSX attack