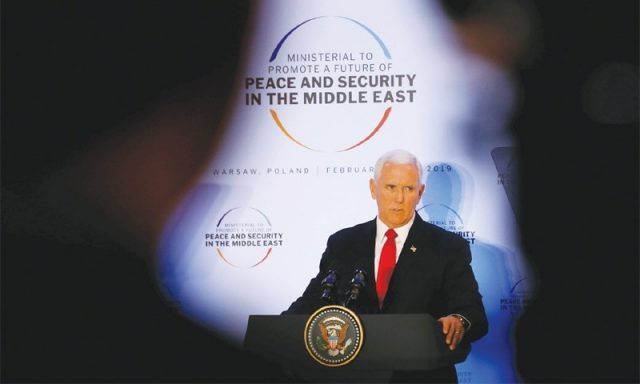 Warsaw: US Vice President Mike Pence demanded on Thursday that Europeans drop a nuclear deal with Iran and join in seeking to cripple the regime, a cause that united Israel with longtime Arab rivals at a conference in Warsaw.

Major European powers sent low-level representation to the US-initiated meeting, suspicious of US President Donald Trump’s hawkish impulses and convinced the 2015 deal under which Iran drastically scaled back its nuclear programme is working.

But Pence took direct aim at allies Britain, France and Germany, denouncing their new initiative to let European companies operate in Iran in defiance of unilateral US sanctions.

Poland — which is eager to please the United States amid fears of a resurgent Russia — said it also backed the nuclear deal but that it was important to raise concerns.

“It’s an ill-advised step that will only strengthen Iran, weaken the EU and creates still more distance between Europe and the United States,” he said. “The time has come for our European partners to withdraw from the Iran nuclear deal and join with us,” he said.

Pence stopped just short of calling for regime change in Iran, which has been comparatively stable in recent years amid unrest throughout the Middle East. Pence threatened further US sanctions as “the people of Iran take to the streets” and its “economy continues to plummet”.

Read more: Iran’s master plan to isolate the US

He accused Iran of plotting a “new Holocaust” with its opposition to Israel and regional ambitions in Syria, Lebanon, Iraq, and Yemen. “Freedom-loving nations must stand together and hold the Iranian regime accountable for the evil and violence it has inflicted on its people, on the region and the wider world,” Pence said.

Pence tacitly acknowledged that Iran is in compliance with the 2015 nuclear deal but said the issue was the accord itself, brokered under Trump’s predecessor Barack Obama.

European leaders say the agreement was never meant to address all concerns with Iran and that Tehran is hardly the only problematic player in the region. “Europe is not divided on the issue of Iran. Europe supports the nuclear accord with Iran,” said German foreign ministry official Niels Annen.

Top officials of Saudi Arabia, the United Arab Emirates and Bahrain — none of which recognize Israel — sat down with Prime Minister Benjamin Netanyahu in Warsaw starting with a dinner Wednesday at the Royal Castle.

Another senior official from a major European power said “we strongly disagree” with Pence’s remarks and said that other regional issues such as Syria and Yemen would be even more difficult to resolve if Iran is isolated.

Poland — which is eager to please the United States amid fears of a resurgent Russia — said it also backed the nuclear deal but that it was important to raise concerns.

“The discussion showed that the EU and the United States shared the diagnosis of the situation, and have similar views regarding the problems in the Middle East, and also, let’s say it openly — the negative role played by Iran,” Polish Foreign Minister Jacek Czaputowicz said at the close of the conference.

Top officials of Saudi Arabia, the United Arab Emirates and Bahrain — none of which recognize Israel — sat down with Prime Minister Benjamin Netanyahu in Warsaw starting with a dinner Wednesday at the Royal Castle.

Netanyahu called the talks a “historical turning point” and voiced hope they could lead to a greater normalization of relations.

“An Israeli prime minister and the foreign ministers of the leading Arab countries stood together and spoke with unusual force, clarity and unity against the common threat of the Iranian regime,” Netanyahu told reporters as he arrived for Thursday’s main session at a football stadium.

Israel only has diplomatic relations with two Arab countries, Egypt and Jordan.

What’s the goal behind the US ‘cleanup operation’ in Saudi Arabia?