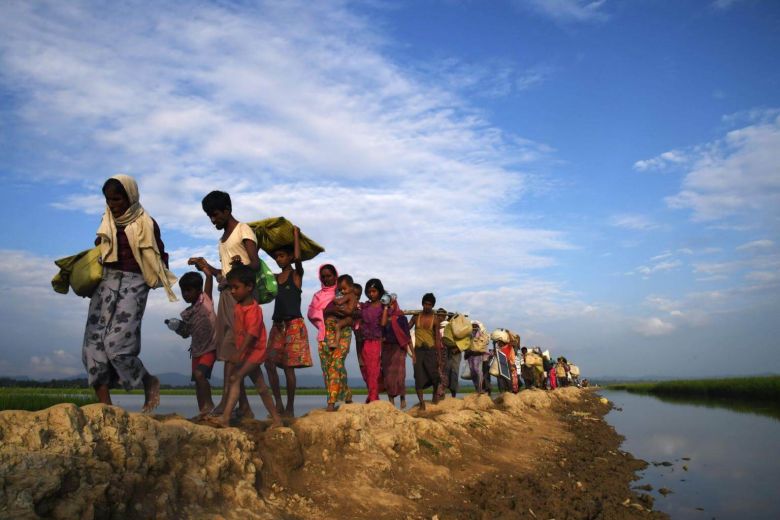 The United States said Monday it had found evidence of systematic violence by Myanmar’s military against the Rohingya minority, including widespread killings and rape. The State Department released the report just as the United States announced $185 million in new funding for Rohingya refugees during a meeting at the United Nations on Myanmar.

The State Department study, based on interviews in April with 1,024 Rohingya adults who have taken refuge in neighboring Bangladesh, provided accounts consistent with reports from human rights groups but kept largely to dispassionate descriptions of events.

The report notably avoided using the terms genocide or ethnic cleansing to describe the mass killings of the Rohingya, a mostly Muslim group concentrated in Rakhine state that is despised by many in Buddhist-majority Myanmar and who are not considered citizens.

Myanmar’s army chief Min Aung Hlaing was recently quoted in a newspaper as telling his troops that no country, organization or group has the “right to interfere in and make decisions over sovereignty of a country.”

“The survey reveals that the recent violence in northern Rakhine State was extreme, large-scale, widespread and seemingly geared toward both terrorizing the population and driving out the Rohingya residents,” said the report by the State Department’s Bureau of Intelligence and Research.

“The scope and scale of the military’s operations indicate they were well-planned and coordinated,” it said. “In some areas, perpetrators used tactics that resulted in mass casualties, for example locking people in houses to burn them, fencing off entire villages before shooting into the crowd or sinking boats full of hundreds of fleeing Rohingya.”

The report said that 82 percent of the interviewed refugees personally witnessed killings, with 51 percent also reporting sexual violence. The State Department said that witnesses hailing from multiple villages reported similar rapes, in which military men would force all the women to leave their homes.

“They would then choose a smaller number of women — often four or five, but some refugees reported up to 20 — whom as many 15 soldiers would then take to fields, forests, houses, schools, mosques or latrines to gang rape,” it said. “Many victims were reportedly killed afterward, though not in all cases,” it said, adding that soldiers in some cases would go door to door to find the “‘prettiest’ girls” to gang-rape.

The State Department released the report just as the United States announced $185 million in new funding for Rohingya refugees during a meeting at the United Nations on Myanmar.

In an overwhelming 88 percent of cases, the witnesses said that the military was behind atrocities. Few said they saw attacks against them by the Arakan Rohingya Salvation Army (ARSA), the Islamic militant group whose assaults on military posts in October 2016 triggered the crackdown.

The violence in Myanmar, formerly known as Burma, was unleashed soon after the country transitioned to democracy, undermining what Western governments had hailed as a triumph of engagement. The campaign against the Rohingya has especially tarnished the international reputation of Aung San Suu Kyi, the long-detained democracy advocate and Nobel laureate who has been reticent in addressing the violence.

Read more: Catalogue of abuse: seeking justice for the Rohingya

More than 700,000 Rohingya have taken refuge in Bangladesh, fearful of returning to Myanmar despite a repatriation deal between the two countries. Meanwhile, Britain hosted a meeting of about a dozen foreign ministers that was also attended by Myanmar’s Minister for the Office of State Counsellor Kyaw Tint Swe and International Cooperation Minister Kyaw Tin, although Suu Kyi did not come to New York.

The State Department said that witnesses hailing from multiple villages reported similar rapes, in which military men would force all the women to leave their homes.

Fresh from a visit to Myanmar, British Foreign Secretary Jeremy Hunt warned that military leaders must answer for any atrocities committed against the Rohingya. “If, in a year’s time, we have not made a meaningful difference to the lives of the million or more people affected, then we have failed as an international community,” Hunt told the closed meeting, according to the spokesperson.

US Ambassador Nikki Haley announced the $185 million for food, water, health care and other critical aid to the refugees, even as the United States dramatically scales back its admission of refugees. Japan, which has pursued close ties with the country whose former junta was allied with China, urged Myanmar to create conditions for the refugees’ return but also called for support of the civilian government.

Foreign Minister Taro Kono “emphasized that democracy in Myanmar is still in a very preliminary stage and, in order for Myanmar not to backtrack to its former military regime, the support of the international community is necessary,” spokesman Takeshi Osuga said.

Myanmar’s army chief Min Aung Hlaing was recently quoted in a newspaper as telling his troops that no country, organization or group has the “right to interfere in and make decisions over sovereignty of a country.”

Trump did not carry out his threat on Iran last time – what will happen now?