US Homeland Security chief Nielsen out as border crossings surge 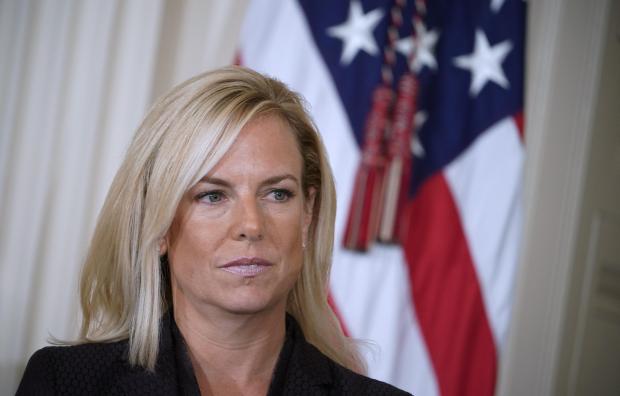 US President Donald Trump on Sunday announced the departure of Homeland Secretary Kirstjen Nielsen, underscoring his intent to toughen immigration policy amid a surge in illegal crossings along the southern border. Nielsen’s exit marks the end of a difficult relationship with her boss, who was said to be unhappy with her performance despite her unswerving loyalty and full-throated defense of the president’s most controversial policies.

During her 18 months at the helm of the powerful agency, the 46-year-old became synonymous with the controversial practice of separating children from their parents, making her a frequent target of progressive groups and the Democratic opposition who repeatedly called on her to resign. None of this, however, seems to have been enough for Trump.

Images of sobbing children being taken from their parents last year fuelled a national outcry as condemnation poured in from the United Nation.

“Secretary of Homeland Security Kirstjen Nielsen will be leaving her position, and I would like to thank her for her service,” Trump tweeted Sunday. He added US Customs and Border Protection Commissioner Kevin McAleenan would become acting secretary.

“Despite our progress in reforming homeland security for a new age, I have determined that it is the right time for me to step aside,” Nielsen said in a resignation letter she later shared on Twitter. The move came just two days after she and Trump visited the Mexican border in California together, with the president delivering a stern message to would-be illegal immigrants and asylum seekers: “Our country is full.”

Read more: What if the United States has trade and immigration controls?

Despite warnings of dire economic consequences, including by top Republicans, Trump has repeatedly threatened to close the US-Mexico border, demanding that Congress and Central American governments act to stem a flow of migrants that saw Nielsen last week order an “emergency surge” of personnel to handle the situation.

“System has been broken for many years. Democrats in Congress must agree to fix loopholes – No Open Borders (Crimes & Drugs). Will Close Southern Border If necessary…” he tweeted Sunday evening.

“Secretary of Homeland Security Kirstjen Nielsen will be leaving her position, and I would like to thank her for her service,” Trump tweeted Sunday

On Friday, US media reported that Trump also pulled his nominee to lead the Immigration and Customs Enforcement department — saying he wanted someone “tougher” at the helm of the Homeland Security sub-agency.

Together, the shake-ups were seen by observers as a sign the president wants to tack an even harder line. Border Patrol estimates put the number of migrants passing through Mexico at over 100,000 in March, most from El Salvador, Honduras and Guatemala: the highest monthly figure in nearly a decade, according to Nielsen.

Trump cut aid to those three countries last month in response to the surge. “When even the most radical voices in the administration aren’t radical enough for President Trump, you know he’s completely lost touch with the American people,” Senate Minority Leader Chuck Schumer said Sunday.

Images of sobbing children being taken from their parents last year fuelled a national outcry as condemnation poured in from the United Nations.

House Speaker Nancy Pelosi added it was “deeply alarming that the Trump Administration official who put children in cages is reportedly resigning because she is not extreme enough for the White House’s liking.” Nielsen initially joined the Trump administration in January 2017 as an assistant to Trump’s first DHS secretary, John Kelly.

When Kelly moved to the White House as Trump’s chief of staff in July 2017, Nielsen went with him as his deputy. But by October of that year she was back at DHS, this time as secretary. Disaster relief, cybersecurity, transportation security, the Coast Guard, customs and policing the borders all fall under the department’s purview.

She will be remembered most, however, as the face of the Trump administration’s fierce anti-immigration policy, including the widely condemned practice — since revoked — of separating migrant children from their parents as part of a “zero tolerance” policy of prosecuting all illegal border crossers.

Trump cut aid to those three countries last month in response to the surge.

Images of sobbing children being taken from their parents last year fuelled a national outcry as condemnation poured in from the United Nations, human rights groups, and four former first ladies — all mothers — who called the policy “cruel” and “immoral.”  Nielsen, though, bristled at suggestions the children were being mistreated, or placed into what appeared to be “cages.”

And in any case the children taken from their parents after crossing the border were “well taken care of,” she insisted. “@SecNielsen’s legacy of tearing innocent families apart will follow her for the rest of her life—and she should be ashamed of the role she played,” Democratic senator and 2020 hopeful Elizabeth Warren tweeted of Nielsen’s exit.

On the other side, Republican Senator Lindsey Graham said Nielsen “did her best to deal with a broken immigration system and broken Congress.” Despite reports Trump complained constantly about Nielsen performance — and that he believed she was not harsh enough — she remained a loyalist.

When participants in a January 2018 White House session on immigration quoted Trump as referring to African nations as “shithole” countries, Nielsen came to the president’s defense. “I did not hear that word used,” she told a congressional hearing. Last month, she defended the president’s declaration of a national emergency to secure funding for his pet project: a wall on the US-Mexico border.