US Interest: Kiss of Death for PTM? 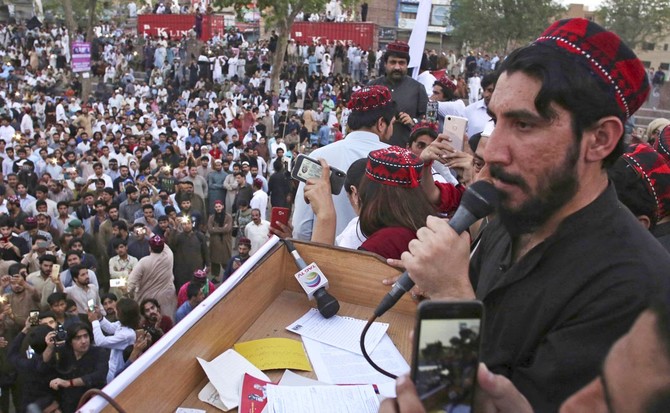 Pashtun Tahafuz Movement (PTM) Rally in Lahore, that was planned for Mochi Gate, on Sunday, around 4pm, has not been allowed by District Administration citing security concerns. There are also reports of some arrests of PTM leaders and workers.

PTM leader, Manzoor Pashteen, had announced Mochi Gate rally on April 8, and posters were distributed through social media. While print media regularly cover events of PTM, Pakistan’s mainstream TV media has generally ignored these rallies something that is bitterly criticized by the supporters of PTM and commentators in western media. BBC Pashto, VOA (Deva) and major US publications like New York Times, Washington Post, Foreign Policy, Asia Times and others have extensively covered Manzoor Pashteen’s activities.

District Administration in Lahore, that initially did not see any problem with PTM rally at Mochi Gate, cites security concerns and reports of a threat level. Police officials have commented, strictly off the record, that they fear that attempts can be made to harm PTM leaders or rally participants to manufacture a larger national crisis. A video made by a phone is circulating on social media, and is on site of some Pakistani newspapers, that shows police officials demanding some PTM leaders to surrender to police for their own protection. There is no official confirmation of these arrests. Lahore police is still making arrangements to provide protection to the rally at Mochi gate, though it does not expect any large gathering.

Exaggerated interest of mainstream US media and think tanks in PTM has further convinced most in Pakistani media and political parties that western interests led by the US are actively pushing PTM with an agenda. Questions are also being raised regarding funding and logistics of PTM rallies and social media campaigns. PTM has also surfaced at a time of unprecedented tense relations between Trump administration and Pakistan. US has stopped Pakistan’s financial aid, reimbursement of Coalition Support Funds (CSF), almost all military cooperation and has sponsored, along with UK, move to push Pakistan into grey list of Financial Action Task Force (FATF).

Before April 9 meeting of Nuclear Suppliers Group (NSG) US Commerce Dept added seven Pakistani companies to its “Entity List” accusing them of activities that may lead to proliferation of nuclear related or dual use technologies. US is actively lobbying for India’s entry into NSG -minus Pakistan. PTM is thus seen by most in Pakistani media and strategic community as yet another pressure point created by the US. Trump administration accuses Pakistan of supporting Haqqani Network, a faction of Afghan Taliban and seeks active Pakistani actions against Afghan Taliban. Pakistani strategic community, military establishment, foreign office, mainstream political parties and media commentators see this as a dangerous slippery path fraught with long term implications for Pakistan that has to live for ever with its Afghan neighbors – and has struggled hard against waves of destabilization emanating from an Afghanistan disturbed since 1979.

Manzoor Pashteen of PTM surfaced positively in Pakistani consciousness mainly for his rallies seeking justice for Naqeeb Ullah Mehsud, a shopkeeper in Karachi believed to be innocent and killed extra-judicially by Rao Anwar, former SSP Police. This resonated with Pakistani media and was massively covered by mainstream TV channels. However Pashteen of PTM later came up with, or already had, five demands including: clearing of landmines, recovery of missing persons, an end to discrimination against Pashtuns, and a judicial commission on extrajudicial killing of Pashtuns.

Rao Anwar, former SSP Police, initially a fugitive from law, and believed to be supported by powerful political elements in Sindh, is now under arrest and is facing courts. But photos of Manzoor Pashteen also emerged, on social media, suggesting intimate long standing contacts with Mehmood Achakzai, leader of Pashtunkhwa Milli Awami Party (PkMAP). Ackakzai has the reputation of being supported by Afghan intelligence, NDS and NDS in Pakistan is seen as baby of Indian External Intelligence, RAW. Achakzai and other leaders of PkMAP prominently appeared in PTM rallies and, its believed, are funding PTM. Emergence of these facts, along with vocal support by BBC Pashto, VOA (Deva), New York Times, Washington Post, Foreign Policy and US think tanks has lead to widespread belief in Pakistani media that PTM is less of an organic Pakhtun reaction from FATA and more of an international agenda set into motion for regional tradeoffs.

Michel Kugelman, at Wilson Institute, a US think tank, tweeted that its hard to dispute the great significance of this man (Manzur Pashteen) and his movement. Comments like these – seen unrealistic by most Pakistanis – have further cemented the growing belief that PTM and its leader is a chip in larger US strategy in the region. And there are now fears, as being expressed by Lahore Police, that there might be attempts from somewhere against him or his workers, to create a bigger political issue.

Whether you’re a fan or a critic, it’s hard to dispute the great significance of this man and his growing movement. https://t.co/BJA2LiIpMQ

Barring an unusual US interest in PTM, most in Pakistan can empathize with the plight of tribals of Federally Administered Tribal Areas (FATA). PTI the dominant political party in KP, and its leader Imran Khan, had always taken a position against army action in FATA. Khan was ridiculed as “Taliban Khan” by Pakistani liberals and western media – ironically the same elements are now crying for rights of Pashtuns in FATA and are trying to turn that into a larger movement of Pashtun nationalism.

But Pashtuns after Punjabis are the most privileged and integral part of Pakistani nation state represented well in political spectrum, business, army, civil bureaucracy, media and arts. It is understood that war in Afghanistan, emergence of TTP and its turning FATA into a center of attacks against KP and rest of the country, hundreds of US drone strikes, Pakistani military’s entry in the region, army action, check posts, arrests and detentions all have infuriated tribals of FATA used to a free life for centuries.

Committee headed by Adviser to PM, Sartaj Aziz, had after long deliberations, in 2016, recommended that the quickest and most practical solution for mainstreaming of FATA is its integration into Pakhtun province of Khyber Pakhunkhwa. This plan enjoyed the support of mainstream political parties like PTI, ANP, PPP and Jammat -e-Islami and would have provided for the replacement of Army by KP police, district administrations and judiciary. But Mehmood Khan Achakzai, (who now supports PTM) mainly a leader in Baluchistan and Maulana Fazal ur Rehman opposed integration into KP and prevailed upon PM Nawaz Sharif to delay the whole process leading to a political stasis and vacuum. It is in this political vacuum that PTM and its external supporters are now operating.

Saudis say: “we don’t want war; but will defend ourselves”

“My vote is not for sale,” Achakzai on the Revival of Military Courts