US intrusion in Syria: Killing government forces in the name of “self-defense” 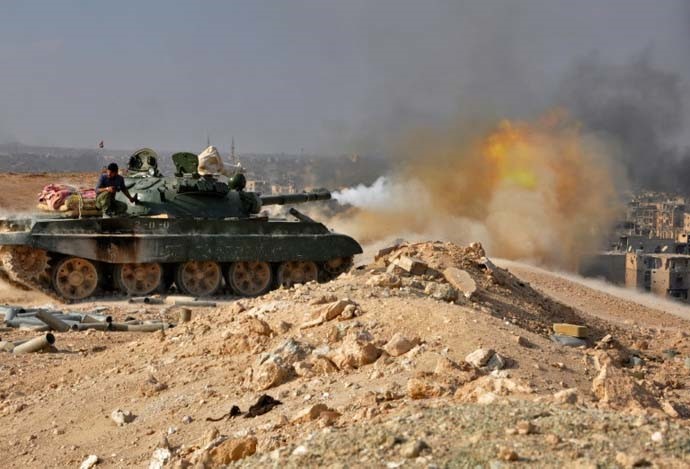 The United States has carried out strikes against the Syrian forces. Two such strikes were carried out last week as the Syrian government-allied forces had been attempting to drive ISI away. The US has set up a military base inside Syrian territory at Al-Tanf on the border with Iraq and declared it a “de-confliction” zone. Any Syrian government or government-allied forces entering a 50km buffer zone around the base would be attacked, Washington warned.

The anti-Iran propaganda from government and the mainstream media may fool the American public on this, but in fact, these are the same Shia militias who have been fighting on the same side as the US in its siege of Mosul in Iraq.

Ironically, US Defense Secretary James Mattis claimed that US attacks on Syrian government forces operating against ISIS inside Syria were in “self-defense.” But it is the US military that is trespassing on Syrian soil. Imagine an intruder claiming self-defense after shooting a homeowner in his own house! That is how absurd the US argument is.

Mattis is heavily involved in spinning the US presence in Syria near the Iraqi border as a US fight against Iranian proxies. These are “Iranian-directed” forces, he claimed yesterday. The anti-Iran propaganda from government and the mainstream media may fool the American public on this, but in fact, these are the same Shia militias who have been fighting on the same side as the US in its siege of Mosul in Iraq. And what are they doing in that part of Syria? Also fighting ISIS. The same ISIS that took “credit” for the deadly terrorist attacks in Iran this week.

What’s going on here? The US is desperate to keep the Syrian government forces from hooking up with the Iraqi military to tackle ISIS in its last strongholds, even though such a move would no-doubt make sense if the real goal was to defeat ISIS. Why? Iran. Closer cooperation between Syria and Iraq is seen by Washington to benefit Iran, and the Trump Administration has already made it clear that it is firmly in the Saudi and Israeli anti-Iran camp.

It is clear that even if his intentions are for a real “America first” foreign policy, President Trump has gone completely off the rails.

Despite US efforts, Syrian and Iraqi forces are said to have met up northeast of the US “base” at Al-Tanf and are moving to lift the years-long ISIS siege of Deir Ezzor on the road to Raqqa.

Read more: Has the US created another excuse to strike Syria?

Will the US accept new facts on the ground, or are more US airstrikes on Syrian (and maybe Iraqi) government forces on the menu for next week? Such strikes inarguably benefit ISIS, which presents a PR problem for the US among some of its allies (even if the news never gets to the American people due to the mainstream media’s lack of professionalism). And what will the Russians do with the US operating from an illegal base inside the territory of its ally, Syria, and attacking the Syrian government?

It is clear that even if his intentions are for a real “America first” foreign policy, President Trump has gone completely off the rails. Washington is a bubble and an echo chamber when it comes to foreign policy.

Daniel McAdams is the Executive Director of the Ron Paul Institute for Peace and Prosperity. This article was first published in Ron Paul Institute (ronpaulinstitute.org). The views expressed in this article are the author’s own and do not necessarily reflect Global Village Space’s editorial policy.

Tomato: A gold like commodity Pakistanis can only make memes about now