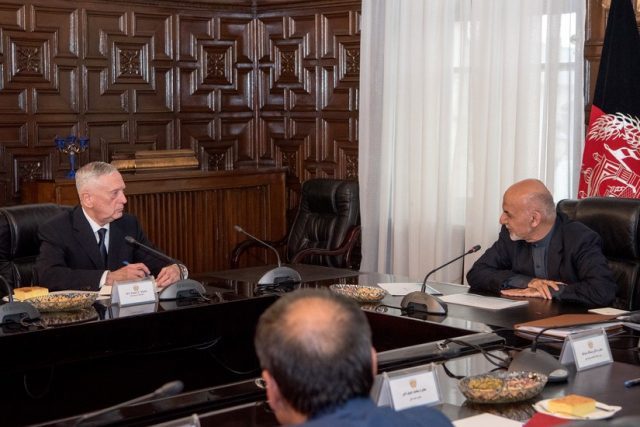 The Principal Assistant Secretary of State in the US state department’s Bureau of South & Central Asian Affairs, Alice Wells gave an extraordinary briefing in Washington on March 5 on the Trump administration’s outlook on the Afghan peace talks and reconciliation. The fact that the briefing was on record is itself of significance, underscoring the cautious optimism that the 4-way contacts and below-the-radar discussions between Washington, Islamabad, Kabul and the Afghan Taliban have gained traction.

Wells has touched on all aspects of the situation and they are almost entirely in consonance with my own assessments contained in the opinion piece, which appeared in The Tribune newspaper on March 5. (Joint gains from Afghan Peace, The Tribune, March 5, 2018)

Pentagon would know that the Taliban cannot be defeated through air strikes and this is a hopeless stalemate what needs to be addressed on the political and diplomatic track. Wells said,

The most significant thing will be that Wells has forcefully, unequivocally – even euphorically – backed Afghan President Ashraf Ghani’s peace offer on February 27 to the Taliban, and has pledged that Washington intends to promote the process, no matter what it takes. Equally, Washington estimates that the Taliban has not yet “officially responded”, various media reports attributed to Taliban spokesmen notwithstanding. Wells pointedly urged the Taliban to accept the peace offer.

The Trump administration expects Pakistan too to put its weight behind the Taliban leadership to bring them to the negotiating table. The Pakistani Foreign Secretary Tehmina Janjua arrived in Washington on March 5 for talks. Pakistan is confident of taking the process forward. Wells said,

Read more: The beginning of the Sino-Indian romance?

At any rate, the Trump administration has no alternative but to take Pakistan at its word.

From the Indian perspective, the salience of Well’s briefing lies in the US’ acknowledgement of Pakistan’s centrality in the Afghan peace process and, notably, Pakistan’s “legitimate concerns”, which Washington intends to address. This is how Wells framed the US policy:

Two vectors that are going to shape the agenda of the forthcoming peace talks are: a) Washington accepts that Taliban has “legitimate grievances… (that) will have to be addressed at the negotiating table”, and, b) the US does not “preordain” any factions or elements within the Afghan Taliban movement to be “irreconcilable.” The latter means, plainly put, that it is entirely up to the Haqqani network to bid farewell to arms and join the peace talks and reconciliation. Wells chose her words carefully:

Of course, it is unthinkable that the Haqqanis will defy the Pakistani diktat and continue to pose a terrorism threat. It is hugely significant that at one point, Wells went out of the way to openly acknowledge without caveats as to what is it that distinguishes the Taliban from the ISIS – simply put, Taliban is a legitimate Afghan entity:

Then, there is the tantalizing question of the fate of the US military bases in Afghanistan. Here, Wells parried, pleading evasively that it is entirely up to the future government in Kabul to decide whether continued US military presence is needed or not. But then, en passé, she added meaningfully, “No one is precluding any formula…” To my mind, there is going to be some sort of tradeoff.

Indeed, it may suit Pakistan too that there is continued US military presence in Afghanistan. For one thing, there is the searing experience of the Mujahideen takeover in Kabul in 1992 and the ensuing anarchy. Fundamentally, Pakistan has always sought that Taliban enjoyed US recognition, and, in the given situation, it is in Pakistan’s interests too that the US remains a stakeholder in the post-settlement era in Afghanistan. For, that would inevitably translate as US/NATO dependence on Pakistani cooperation, resuscitation of Pakistan’s role as a “non-NATO ally”, US interest in strengthening the strategic partnership with Pakistan, a US mediatory role in India-Pakistan issues, and, most importantly, the US as a guarantor that what has been shored up by way of an Afghan settlement doesn’t get undermined by other regional states that might harbor revisionist tendencies. The bottom line is that the Pakistani elite cannot think of a future for their country without an enduring strategic partnership with the US.

The Afghan peace process is not taking place in isolation but forms part of the broad framework of Pakistan-US strategic relationship.

Unsurprisingly, Wells singled out Russia in almost adversarial terms. What emerges is that the US approach is to try to forge a regional consensus at the forthcoming Tashkent conference this month, which would pile pressure on Russia to fall in line. Evidently, Washington proposes to bypass Moscow and deal directly with the Central Asian capitals to create a regional consensus and support system for the peace process leading to a settlement.

Finally, Washington is still keeping its fingers crossed that Pakistan rises to its expectations, which is not surprising, given the backlog of distrust. Wells said,

Once bitten, twice shy? At any rate, the Trump administration has no alternative but to take Pakistan at its word. Despite the bravado about the US military strategy making headway, Pentagon would know that the Taliban cannot be defeated through air strikes and this is a hopeless stalemate what needs to be addressed on the political and diplomatic track. Wells said,

Read more: US creates rift among Russia, Turkey and Iran

All in all, Wells’ briefing augurs the opening of a new page in the chronicle of the Afghan war. It signifies that that the war is most likely drawing to a close and the ending is going to be like how all insurgencies in history rooted in native soil finally ended – via reconciliation with the insurgents. The full transcript of Wells’ briefing is here.

Taliban return: What do Afghanis think?