After slamming India on Kashmir lockdown, Bernie Sanders has recently released a campaign message in the Urdu language on his official Facebook page. During his run for president, Sanders has won the hearts of Pakistani’s – and Muslim’s – on multiple occasions.

In an effort to reach to the Pakistani community in the US, the United States presidential candidate and Democratic member of the US Senate, Bernie Sanders, released a campaign message in the Urdu language on his official Facebook page.

The post, meant to garner support of the Urdu-speaking community in the US, earned lots of praise on social media from users across the world. The message conveys that the Medicare for All programme, championed by Sanders, covers oral care, issues related to eyesight, as well as a host of other problems associated with hearing.

Immediately after Sanders shared the post, it was liked and shared hundreds of times. A large number of people posted comments that were a modified version of several slogans used in Pakistan during election season. 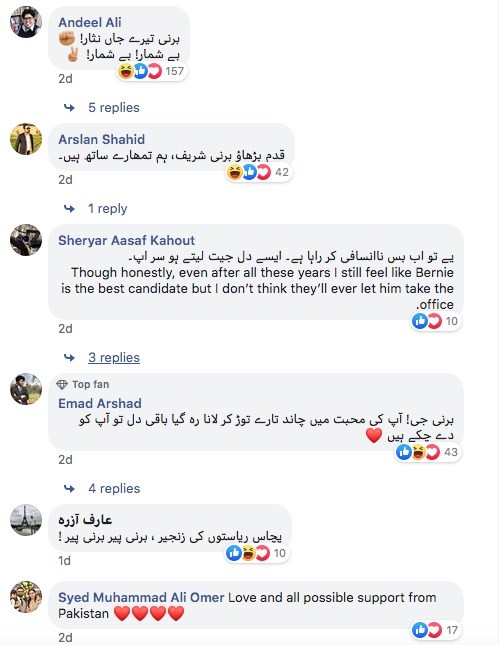 The post not only earned a lot of reaction on the social networking platform but also some hilarious comments from users.

The American politician has made efforts in the past as well to reach out to the Pakistani community in the US.

Back in September, he issued a strongly-worded statement condemning the actions of Indian forces in occupied Kashmir and demanding Delhi lift the blockade imposed on the valley.

Sanders had said he was deeply concerned about the situation in the Indian occupied Kashmir and called for immediate removal of the communication blockade. Speaking at the 56th Islamic Society of North America (Isna) convention in Houston, the 2020 Democratic presidential candidate had said, “India’s action [in Kashmir] is unacceptable.”

“I am deeply concerned about this situation in Kashmir where the Indian government has revoked Kashmiri autonomy, cracked on dissent and instituted a communications blackout. The crackdown in the name of “security” is also denying the Kashmiri people access to medical care,” Sanders said.

He added, “even many respected doctors in India have acknowledged that the Indian government-imposed restrictions on travel are threatening the life-saving care that patients need.”

Read more: India’s Actions in Kashmir are Unacceptable, US must Intervene: Bernie Sanders

Sanders, a vocal critic of US President Donald Trump, urged the United States to ‘speak boldly in support on the international humanitarian law and in support of a UN-backed peaceful resolution’ of the conflict that ‘respects the will of the Kashmiri people’.

He was given a standing ovation by the attendees at the convention.