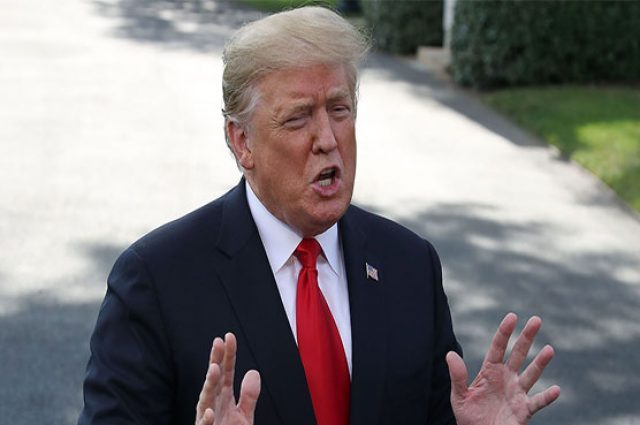 US President Donald Trump on Wednesday demanded that Saudi Arabia provide answers over the disappearance of journalist and US resident Jamal Khashoggi, whom Turkish officials suspect was murdered after entering the Saudi consulate in Istanbul. The Trump administration sharply upped the pressure, reversing an initially low-key response after Washington Post contributor Khashoggi vanished on October 2.

Trump said he had talked “more than once” and “at the highest levels” to partners in Saudi Arabia, which is one of Washington’s closest allies and a key market for the US weapons industry. “We’re demanding everything,” Trump told reporters. “We cannot let this happen, to reporters, to anybody.”

Saudi officials were heard discussing a plan to lure Khashoggi from the US state of Virginia, where he resided, and detain him, the newspaper said, citing unnamed US officials discussing intelligence intercepts.

“We are very disappointed to see what’s going on. We don’t like it and we’re going to get to the bottom of it,” he added. In a later interview with “Fox News at Night,” Trump said “it would not be a good thing at all” if the Saudis were proven to be involved.

Twenty-two senators wrote to Trump invoking the Global Magnitsky Human Rights Accountability Act, which requires the president to open an investigation and determine whether sanctions should be imposed. The act is used in cases of suspected “extrajudicial killing, torture, or other gross violation of internationally recognized human rights against an individual exercising freedom of expression,” the senators said.

Read more: Murder of Saudi Journalist: A ticking time bomb between Turkey and…

Asked in the Fox interview about suggestions in Congress that arms sales to the kingdom be blocked, Trump replied that such a move would hurt the US economy. “Frankly, I think that would be a very, very tough pill to swallow for our country,” he said.

The Washington Post, where Khashoggi has been a regular contributor over the past year, also called for answers.

The United States has not confirmed Turkish claims that Khashoggi, a US resident and one of the more outspoken critics of the regime of King Salman and his son Prince Mohammed, had been lured to the Istanbul consulate and murdered by a team of 15 government operatives sent by Riyadh to Istanbul.

But The Washington Post reported Wednesday that Prince Mohammed himself had ordered an operation targeting Khashoggi. Saudi officials were heard discussing a plan to lure Khashoggi from the US state of Virginia, where he resided, and detain him, the newspaper said, citing unnamed US officials discussing intelligence intercepts.

The case has sparked outrage from human rights and journalism groups. In the calls by Bolton, Kushner, and Pompeo, Sanders said, “they asked for more details and for the Saudi government to be transparent in the investigation process.” Trump also said he was looking into a meeting in the White House with Khashoggi’s fiancee, Hatice Cengiz.

US peace activists Code Pink mounted a protest in front of the Saudi Embassy in Washington Wednesday, brandishing signs saying “Where is Jamal Khashoggi?” and “Khashoggi: Another Victim of Saudi Violence.”

“We are very very disturbed” by Khashoggi’s disappearance, said Code Pink founder Meda Benjamin. “We think that there is very little hope that Jamal is still alive.” The Washington Post, where Khashoggi has been a regular contributor over the past year, also called for answers.

The two sides have cooperated on challenging Iran, on supporting Israel and on the war against the Huthis.

“Reports about Jamal’s fate have suggested he was a victim of state-sponsored, cold-blooded murder,” said Post publisher and chief executive Fred Ryan. “Silence, denials, and delays are not acceptable. We demand to know the truth,” he added.

Khashoggi, 59, is a longtime leading Saudi journalist and former government advisor who went into exile last year after 33-year-old Prince Mohammed rose to power under his father the king.  He has been critical of the monarchy’s continued arrest of critics on both the left and right, despite its professed reforms.

He has also repeatedly assailed Riyadh’s role leading the war against Yemen’s Huthi rebels, a campaign closely identified with Prince Mohammed that has resulted in thousands of civilian deaths and generated a major humanitarian disaster. Khashoggi was last seen entering the Saudi consulate in Istanbul to obtain papers for his pending marriage to Cengiz, who is Turkish.

Riyadh insisted that Khashoggi left the building and called the murder claims “baseless.” Turkish investigators say they have CCTV footage showing him entering the consulate, but not leaving. A source told the Washington Post that US intelligence “intercepted communications of Saudi officials discussing a plan to capture him.”

Reporters Without Borders said in a statement that between 25 and 30 professional and non-professional journalists are currently detained in Saudi Arabia.

The Saudis hoped to “lure” Khashoggi to Saudi Arabia “and lay hands on him there,” the source told the Post. But State Department deputy spokesman Robert Palladino told reporters they had no such tip. “The US had no advance knowledge of Jamal Khashoggi’s disappearance” or of any kind of threat, he said Wednesday.

The issue threatened the strong relationship the Trump administration has constructed with Prince Mohammed. The two sides have cooperated on challenging Iran, on supporting Israel and on the war against the Huthis.

But Prince Mohammed has drawn growing scrutiny over his campaign against critics. Reporters Without Borders said in a statement that between 25 and 30 professional and non-professional journalists are currently detained in Saudi Arabia.

Here is how students are reacting to govt’s decision to conduct exams!

Pakistanis don’t let me pay for any thing: Binsky, US travel blogger

Turkey slams US for disrespecting “spirit of alliance”