US to Saudi Arabia: No more ‘bombings in Yemen’ 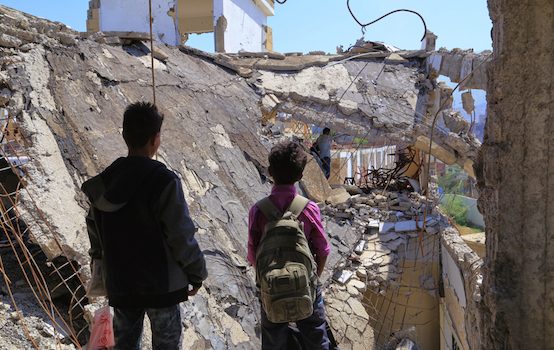 The United States of America has announced to halt the refueling operation of coalition jets and bombers, the only active part in the Saudi led coalition campaign against the Houthi rebels in Yemen. It was announced by Saudi Arabia, however, in a statement, giving the impression that the support was actually declined by the coalition and not the other way around.

The everyday horrific imagery of the consequences which the conflict has brought upon the poor Yemeni population surface the internet and yet there have been no concrete measures taken to resolve the situation.

The developments came after the recent Midterm elections Democrats have secured a majority in the house with whereas Republicans managed to keep the Senate. Lawmakers from both the parties had threatened to bring in the motion against the criminal collusion of the U.S government for participating in the refueling operation which has pushed Yemen to one the biggest humanitarian crisis.

The decision is seen as a mutually agreed one between Washington and Riyadh to avoid any inconvenience for the Trump administration over something which was not extraordinary for the Saudi led coalition in first place. Saudi Arabia and UAE have nearly 30 refueling aircraft, already in service during the war which has now extended over 4 years.

The proximity of both, Saudi Arabia, where the jets take off, and Yemen did not ask for an extensive refueling operation. The core support from the United States of America for the operation against the Houthis– which are taken as the extension of Iranian arm to put Saudi Arabia under pressure and hence increase the influence in the Middle East– remains intact.

U.S. Defense Secretary Jim Mattis said the decision to stop the U.S refueling operation was taken in consultation with the U.S. government and that Washington supported the move while continuing to work with the alliance to minimize civilian casualties and expand humanitarian efforts.

The everyday horrific imagery of the consequences which the conflict has brought upon the poor Yemeni population surface the internet and yet there have been no concrete measures taken to resolve the situation.

The war in Yemen has led to the death of thousands of people so far with millions under the threat of worst famine of the present world. Over the course of four years, Saudi and coalition jets have targeted multiple schools, hospitals and even the wedding ceremonies resulting in the death of scores of civilians.

The indiscriminate bombing and subsequent threats of a humanitarian crisis have called for ceasefire even by the United States and the United Kingdom so that civilians in distress could be reached out to avoid the disaster. Due to the current fight in the port city of Hodeidah which accounts for more than 80% of the shipment of food and medical supplies from International agencies, the threat to a massive famine has increased multiple folds.

The pulling out of refueling support is just an effort to avoid the political rift back home by the United States of America. In a bid to curtail and cut the wings of the Iranian influence in the region, the cost is being paid by the civilians, mostly children, of Yemen.

The everyday horrific imagery of the consequences which the conflict has brought upon the poor Yemeni population surface the internet and yet there have been no concrete measures taken to resolve the situation. There has been a debate that where the U.S is mulling to place sanctions and punish Saudi Arabia for what it did to Jamal Khashoggi inside the Saudi Consulate in Istanbul, the war crimes in Yemen are far more gruesome.

Read more: Riyadh-Tehran rivalry in Yemen: Where is it heading?

It is just a matter of days for the United States to bring the conflict to a conclusion which fits the parameters of morality, but instead, it is letting it proceed for the strategic and also the vested economic interests.

More than 100 killed in air strike on Yemen prison: ICRC

US-Iran standoff has further exposed limitations of US Power?

US restricts its support for Regime change in Iran: What happened?