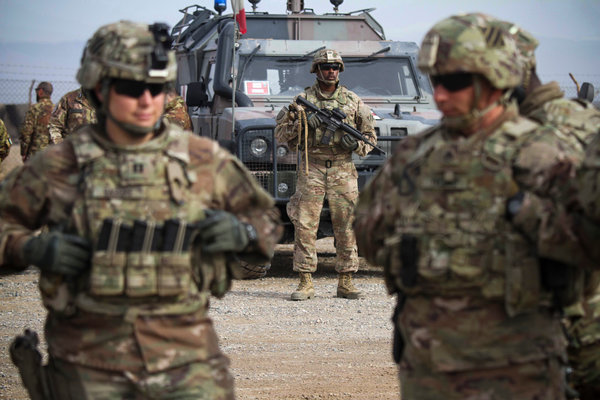 Following swift incursions being made by a resurgent Taliban, top US security and foreign affairs aides have proposed a new strategy for Afghanistan, which would again put the country on a war-footing with the Taliban.

The new strategy calls for an increase in combat troops of about 5,000 in order to take on the confident and brazen Taliban. The strategic fraternity believes that the Taliban could be forced to come to the negotiating table.

The new strategy, fully backed by top Cabinet officials, would authorize the Pentagon, instead of the White House, to set troop numbers in Afghanistan and give the military far broader authority to use airstrikes to target Taliban militants.

The plan comes at the end of a sweeping policy review built around the president’s desire to reverse worsening security in Afghanistan and “start winning” again, said one U.S. official.

This comes on the heels of recent happenings in the country. The US, by employing of GBU 43 Bomb against IS hideouts last month and declining Russian invitation for the Moscow Conference on Afghanistan, gave a clear indication that it would promulgate a military-heavy strategy.

Reverting back to a 2010-like surge could very well be attributed to the difficulties faced by the Afghan government and the military in stemming the Taliban. It must be borne in mind that the Taliban control more territory than it did after its ouster in 2001.

The new strategy, fully backed by top Cabinet officials, would authorize the Pentagon, instead of the White House, to set troop numbers in Afghanistan and give the military far broader authority to use airstrikes to target Taliban militants. It would also lift Obama-era restrictions that limited the mobility of U.S. military commanders on the battlefield.

Trump is expected to make a final call before attending a NATO conference later this month.

Will the Taliban come to the negotiating table?

It is still unclear whether Trump would buy the increase in the military plank of the war. He was quite vociferously against committing troops in foreign conflicts, but his promise to knock the terrorists down goes well with the proposed strategy.

Those opposing upping the military ante argue that even when the troop level peaked at  100,000 and the Taliban were not as bold as they are today, little was achieved.

However, the efficacy of what many calls as “McMaster’s War” is being questioned in various quarters. It is noteworthy to mention that the incumbent National Security Adviser (NSA), Lt Gen McMaster was the architect of President Bush’s troop surge in Iraq.

The plan envisions an increase of at least 3,000 U.S. troops to an existing force of about 8,400. The U.S. force would also be bolstered by requests for matching troops from NATO nations.

Analysts are skeptical in assessing whether the surge would enable the government to woo the Taliban, who are taking over swathes of territory with impunity and ease. Those opposing upping the military ante argue that even when the troop level peaked at  100,000 and the Taliban were not as bold as they are today, little was achieved. It can be rightfully argued that the Taliban will not concede.

Even proponents of the new policy toolkit are showing cautious optimism. This is mainly due to the current state of the Afghan National Army (ANA).

A US official said “Afghan forces will at best be able to “hold the line” this year and begin to recapture some key terrain from the Taliban next year. The goal is to make “incremental progress” in coming years in the hope that those gains will be enough to persuade the Taliban to make concessions that will lead to peace.”

The US could do with the support of Moscow and Islamabad. All other options have not borne fruit; sincere efforts are needed to usher in peace and stability in the war-torn country.

However, given the current situation, it is difficult to expect the Taliban to be bogged down by the application of military power. If anything, the obvious wreckage that will be caused by aerial bombing will further enable the Taliban to press on their “Foreigners leave” demand.

Moreover, a renewed military thrust, besides not discouraging the Taliban rank and file will turn the population at large against the US. Diverting funds from development and state-building efforts to those of war-fighting will cause antagonism.

A negotiated end to the war is the only way that the US can extricate itself from Afghanistan. The US can win hearts and mind by a commitment to an Afghan-led and Afghan-owned peace process, which involves talks with the Taliban. The US could do with the support of Moscow and Islamabad. All other options have not borne fruit; sincere efforts are needed to usher in peace and stability in the war-torn country.

Kulbhushan pops up as India-Pakistan spar at the UN