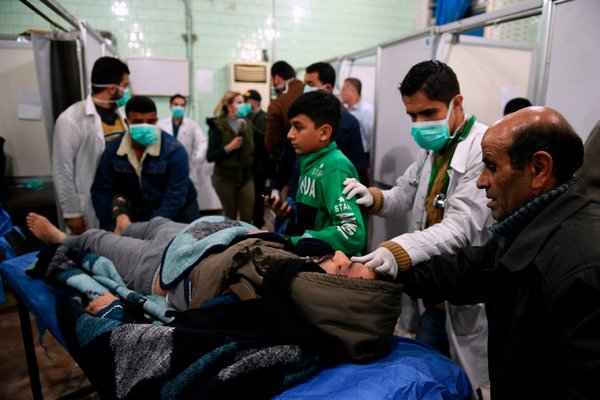 The United States is asking the UN Security Council to set up a new inquiry of chemical weapons attacks in Syria following reports of suspected chlorine use in Eastern Ghouta, according to a draft resolution obtained by AFP on Thursday. The US push to establish the new panel comes three months after Russia killed off a previous UN-led investigation by vetoing the renewal of its mandate, arguing that the probe was flawed.

A draft resolution presented to the council on Wednesday would establish the United Nations Independent Mechanism of Investigation (UNIMI) for a period of one year “to identify perpetrators of chemical weapons attacks in” Syria. A council diplomat said it was unlikely, however, that Russia would back the measure, which calls for investigators to operate in “an impartial, independent, and professional manner.”

The Observatory reported 21 cases of suffocation in Eastern Ghouta on 22 January. Residents and medical sources said they suspected a chlorine attack. A similar attack targeted the outskirts of Douma on January 13.

In January, Russia presented its own draft resolution setting up a new panel, but Western powers expressed reservations, saying Moscow’s proposal would give the Syrian government an upper hand over any investigation of attacks on its territory. It was unclear when the US or Russian draft resolutions on the Syrian chemical inquiry would come to a vote.

The Syrian government has denied using chemical weapons and Russia, its ally in the war, has questioned UN findings that it carried out sarin and chlorine attacks.

UN diplomats met Thursday to discuss the US-drafted measure, which comes days after the Syrian Observatory for Human Rights said a child suffocated to death and 13 other people fell ill from a suspected chlorine attack. A doctor who treated the patients following an air strike Sunday on the village of Al-Shifuniyah in Eastern Ghouta said he believed it was “probably a chlorine gas attack.”

Russia and the United States agreed in 2015 to set up the Joint Investigative Mechanism (JIM) to identify those behind chemical weapons attacks in Syria. The Organisation for the Prohibition of Chemical Weapons (OPCW) has identified dozens of incidents of chemical weapons use in Syria, but its mandate does not allow it to determine who carried out the attack.

A council diplomat said it was unlikely, however, that Russia would back the measure, which calls for investigators to operate in “an impartial, independent, and professional manner.”

After the OPCW said that sarin had been used in the rebel-held town of Khan Sheikhun in April 2016, the JIM investigated and determined that Syrian government forces were responsible for the attack, that killed scores of people. The panel also found that President Bashar al-Assad’s forces used chlorine in at least three attacks on rebel-held villages in 2014 and 2015, and Islamic State group (IS) jihadists had used mustard gas in 2015.

Read more: Real reason why Turkey is not calling for an Investigation into…

The Observatory reported 21 cases of suffocation in Eastern Ghouta on 22 January. Residents and medical sources said they suspected a chlorine attack. A similar attack targeted the outskirts of Douma on January 13. The council is scheduled to hear a briefing from OPCW director-general Ahmet Uzumcu on March 20.