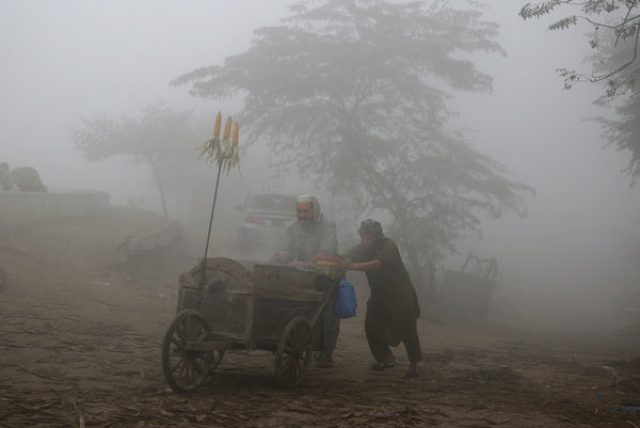 This does not make headlines quite often in Pakistan, but air pollution in the country is a matter of great concern that needs urgent attention and much serious thought to it. It is silently killing hundreds of thousands of people in our cities in Pakistan – we don’t have official numbers available because we don’t do such any research or study in Pakistan regarding air pollution. Thanks to the recent “smog” in Lahore, the issue of air pollution has been highlighted somehow. But, it’s not the smog in itself that is the real issue.

It’s the ever increasing pollutants in the air causing smog. Smog is produced when in cold air sunlight reacts with nitrogen oxides (NOx) and at least one volatile organic compound (VOC) in the atmosphere. Nitrogen oxides come from cars, off-road vehicle (e.g. construction equipment) and factory emissions. VOCs are released from petrol, paints, and many cleaning solvents. Geography can make this worse when the polluted air is trapped in an area with no or little wind blowing. Recently we have seen in Lahore that all we could do was wait for rain to wash it away. But is it this the solution?

The centre can help the government to devise policy to tackle these issues, can support the local industry to modernize their technology & testing facilities, and with the help of Pakistani universities can create a technology based eco-system in the country to keep pace with the modern world.

We need to understand that we cannot blame India for sending the bad air into our country, the smog is an issue in China too and the fact of the matter is that it used to be at dangerous levels in America e.g. Los Angeles as recently as 1970s. [Obviously no one was burning crops across the border in LA]. The reason it changed in America was because of the Clean Air Act.

While tackling smog/pollution issue in LA, the city did not have to forfeit growth either. When you combine a regulation with innovation, you get a pro-growth policy. I am not an expert in industrial pollutants and relevant policies, so I am not going to comment on that, but I am an expert in automotive emissions and I can tell you what dire straits Pakistan is in, in this regard.

Before I give any figures for Pakistan, these are some indicators for comparison (to use as a yardstick):

More than 50,000 people die from pollution in the UK every year, according to a new report. The biggest cause of pollution deaths was found to be chemicals in the air chiefly caused by road traffic. Responding to these repots/studies the Mayor of London has taken drastic steps to ban all cars with pre-Euro4 emission standards from entering London.

Geography can make this worse when the polluted air is trapped in an area with no or little wind blowing. Recently we have seen in Lahore that all we could do was wait for rain to wash it away.

The new cars being sold since 2015 are at Euro6 emissions standards. Even then there have been an estimated 50,000 deaths that were primarily caused by air pollution. Now in Pakistan, what could be more ironic? “Officially” the car manufacturers are selling cars that are at Euro2 emission standards at best. It was not until late 2016 that the oil refineries in Pakistan started producing Euro2 compliant fuel. Here is a comparison of Euro emissions standards (please note the most toxic gasses emitted from vehicles are NOx, HC, PM (fine particulate matter)

This chart shows the permitted emission levels from Euro2 Pakistan’s cleanest cars vs. what is being banned in the UK vs. what is acceptable currently worldwide.

The two and three wheelers which are 10 times more in numbers on our roads are no better, with some even not meeting Euro2 standards. And the fact that the number of vehicles in Pakistan and the time they remain on roads due to congestion is increasing, which is not helping either. In comparison, the number of cars (and the driving time) on-road is decreasing in the developed countries due to better transportation measures, planning and awareness.

Proposals are under consideration to ban driving cars for picking & dropping off kids at primary schools in London because data shows that on those times pollution is at hazardous levels near schools. Next time when you are stuck in a traffic jam on a road in Karachi or Lahore, think about the levels of poisonous gases you’re inhaling in. Pulling the window up and switching the AC on won’t help – contrary to some claims, the air conditioners can’t filter out these toxic gases. Also think of the pedestrians and the roadside vendors (most vulnerable members of society) who spend most of their day exposed to these toxic pollutants.

The new cars being sold since 2015 are at Euro6 emissions standards. Even then there have been an estimated 50,000 deaths that were primarily caused by air pollution.

It’s true India and China are facing similar issues with smog and pollution – some consolation for us! But their response to tackle this is not what we are doing or even planning. They are banning most polluting cars from bigger cities, and most importantly they are adopting emissions regulations at the highest European standards. By 2020 in India all states will be at Euro6 equivalent standards. The Indian ministry of road transport and highways has issued the draft notification, calling the amended rules the Central Motor Vehicles (Amendment) Rules, 2017.  So, it is predicted that in the next 5-10 years, the Indian states/ Chinese provinces will be telling the world how they tackled the pollution issue (like LA did). Will we have such a success story to tell the world?

Unfortunately, in Pakistan, the issue is not just the lack of “homologation” policy. There is no robust mechanism for inspection and adequate testing facilities either. So, we cannot say for sure that even those very low standards are being met for vehicle emissions on our roads. The environmental factors and road conditions have massive influence on the vehicle emissions. So a vehicle tested on Japanese or European homologation (road loads and environmental conditions) may not pass the criteria for conditions in Pakistan. Moreover, there is no checking process for evaluation of old cars on roads whether they are safe or not.

In Europe every car needs to pass an annual test (MOT) to keep it on road and that makes sure the car along with other safety features is still compliant with the emissions levels. And it doesn’t require millions of pounds to build these test stations. The ongoing costs are minimal. Meanwhile in Pakistan: according to one statement from PAMA (Pakistan Automotive Manufacturers Association) published in Dawn News: “There are no standards evolved for the automobiles produced in Pakistan nor are there any labs to check the standards of safety, etc.

Read more: The science of smog

There is no facility to gauge emission standards, adopted in 2012″. “These labs must be fully equipped and internationally accredited but unfortunately our government takes no action in this regard”. “We need specific standards of our own and also have to concurrently develop labs to check them. It will be futile to have only standards without checking mechanism.”

The two and three wheelers which are 10 times more in numbers on our roads are no better, with some even not meeting Euro2 standards.

It is also relevant to mention here that the old technology being used in vehicles is not just hurting us with bad emissions, the problem actually is twofold.  Besides high pollutant emissions, the fuel consumption is almost double the quantity of what it is in modern cars. For example, a 1.6 to 2-litre diesel engine with EU5/6 standard provides fuel economies in the range of 25 – 30 km per litre.

Now compare that with cars running on Pakistani roads (the best I could find in available data was 15 – 18 km per litre and that too on smaller engines). So the country with scarce energy resources is wasting energy because of the government’s off beam (or lack of) policies, industry’s short-sightedness, and an overall lack of confidence in the nation to embrace new technologies to curb modern day problems.

To my mind, the only option to change the above situation is to persuade the government to adopt a stringent and directed policy – come out of living in the myth that it’s expensive. A study published by the United States Environmental Protection Agency (EPA) found that 1$ invested in clean air earned the state $30 in return. It creates economic activity, and reduces the health related costs. A peer-reviewed 2011 EPA study found that, in 2010 alone, reductions in fine particle pollution and NOx & VOCs achieved by the Clean Air Act Amendments of 1990:

The government as well as the industry need to show more responsibility in their social response. You cannot keep reproaching others for negligence on your part. You cannot blame unavailability of resources and expertise in Pakistan (our engineers working in the defence sector within Pakistan have proved their mettle in the world of technology).

If India and China can adopt latest vehicle standards, why can’t we? Why can’t our refineries produce latest standard fuel required by the latest car engines? I know putting exhaust after treatment devices in cars is a bit expensive, but not more than the lives of our people. There should be a clear road map for the future, so that there is a continuous drive towards higher standards. The government should be clear which milestones we need to reach by 2020, 2025, 2030 time frame, then regulate both the manufacturers and refineries to achieve those goals in a timely manner.

Besides high pollutant emissions, the fuel consumption is almost double the quantity of what it is in modern cars.

For the development of technology, we won’t be able to turn the tables overnight, but a pragmatic and tangible approach will surely help steer us in the right direction. The recently established DICE Automotive Innovation Centre at NUST Islamabad can play a pivotal role in achieving these goals.

This offers an opportunity for the government, industry and academia to join hands to address these issues collectively with DICE providing an excellent platform by leveraging expertise of hundreds of expatriate professionals working in the UK and US automotive industry. The centre can help the government to devise policy to tackle these issues, can support the local industry to modernize their technology & testing facilities, and with the help of Pakistani universities can create a technology based eco-system in the country to keep pace with the modern world.

About the Author: Fakhar Mehmood is an automotive engineering expert based in Warwickshire England. He currently works for Jaguar Land Rover, and is also a part time researcher at Loughborough University. Areas of interest are modernising automotive technology, vehicle emissions control, innovation and entrepreneurship. He is also part of DICE Automotive, a strategic initiative of DICE Foundation USA aimed at fostering Innovation & Entrepreneurship culture in Pakistan. Can be reached at fakhar.mehmood@gmail.com

Has Billionare Bloomberg set his eyes on the White House?

Time to stop being duped by the private education industry