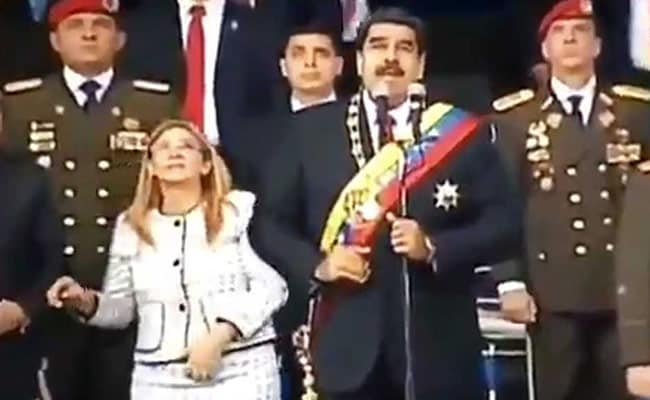 Venezuela’s all-powerful constituent assembly is launching proceedings Wednesday to try opposition lawmakers over a failed “attack” on President Nicolas Maduro, who also accused exiled opposition leader Julio Borges. Constituent Assembly chief Diosdado Cabello called the session to strip the lawmakers of their parliamentary immunity so they could face trial for the alleged and failed bid to kill the president.

“When justice comes, it hits hard,” Cabello said. Maduro and his government said the president had been targeted by two flying drones each carrying a kilogram (2.2 pounds) of powerful C-4 explosives. But details of Saturday’s incident remain unclear, with conflicting information coming from various sources.

All the statements (of detained suspects) point to Julio Borges, who lives in a mansion in Bogota protected by the outgoing government of Colombia, we know he has the cowardice to participate in this type of events

The Maduro administration said Colombia including ex-president Juan Manuel Santos, who ended his term Tuesday had collaborated on the attack with the “ultra far-right” Venezuelan opposition, and it was financed by unnamed figures in the US state of Florida. No evidence was given to support the allegations, which have worsened already fraught ties between Caracas and Bogota.

In a television and radio address, Maduro simultaneously accused opposition legislator Juan Requesens and Borges of having plotted a drone “assassination” attempt on the Socialist leader over the weekend. The president said several raids were underway as part of investigations.

Borges is one of the most prominent figures of the Venezuelan opposition and like Requesens a member of the Primero Justicia (Justice First) party of former presidential candidate Henrique Capriles. Primero Justicia said Requesens and his sister Rafaela were “arrested and hit” in a sweep by the SEBIN national intelligence service unit. Rafaela was later released.

“All the statements (of detained suspects) point to Julio Borges, who lives in a mansion in Bogota protected by the outgoing government of Colombia, we know he has the cowardice to participate in this type of events,” Maduro said. He also railed against Requesens, describing him as one of his “craziest and most psychopathic” adversaries.

Earlier, Requesens delivered a fiery speech in which he promised to keep pushing to get Maduro out of power. “We are going to get Nicolas Maduro to leave in order to get out of this tragedy,” the 29-year-old politician said at the opposition-held legislature. “We will be able to receive all Venezuelans who are crazy enough to return to the country, and for those of us who are here, we have no choice but to continue stretching this rope until it breaks and we can get Nicolas Maduro out.”

Shortly before the opposition crackdown, the legislature had demanded an impartial investigation into the drone explosions and denounced the government’s efforts to use the event to “increase political persecution” of the opposition. “We reaffirm that Venezuelans’ political struggle must focus on obtaining free and fair elections with full democratic conditions under international observation,” added the declaration read in the semi-circular chamber.

The Constituent Assembly loyal to Maduro moved to May the presidential election usually held in December, leading to Maduro’s election until 2025. But the opposition and much of the international community rejected the results as illegitimate. On Monday, Attorney General Tarek William Saab said several suspects were in custody and authorities would track down “all those who conspire against the public peace.”

He called the drone attack, in which seven soldiers were said to be wounded, “an attempted massacre.” Interior Minister Nicolas Reverol said Sunday that six suspects had been arrested. No drones could be seen in the broadcast of the event, which was cut moments after the soldiers were seen scattering away from where Maduro was standing flanked by military chiefs and his wife.

N. Korean athletes arrive in the South for Paralympics

Is Argentina going to purchase JF-17 Thunder aircraft from Pakistan?

Will Sonam Kapoor become a bride in 2018?