Venezuelan military: the muscle behind Maduro 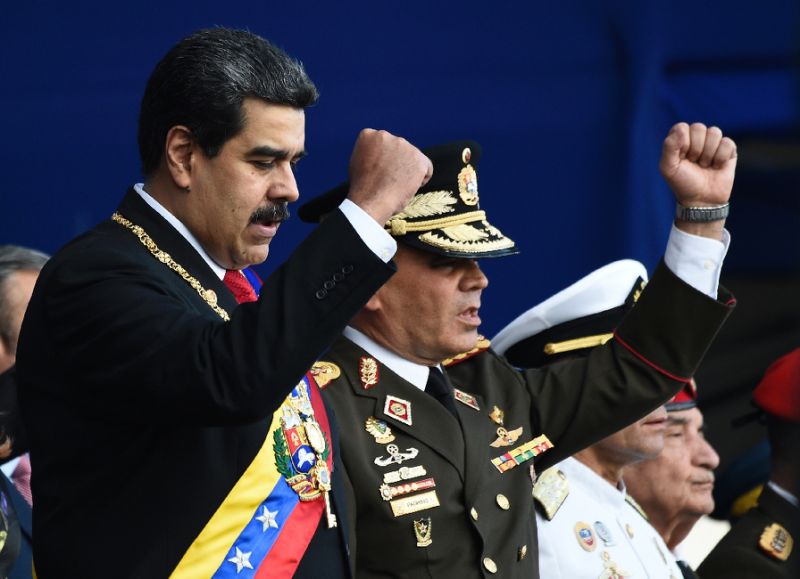 The latest developments in Venezuela’s political crisis have dealt a severe blow to President Nicolas Maduro — severe, but not fatal, for one key reason: the military still backs him. The National Bolivarian Armed Forces of Venezuela pointedly reiterated their loyalty to Maduro on Thursday, a day after opposition leader Juan Guaido declared himself the country’s acting president.

In a statement read out to the press by Defense Minister Vladimir Padrino, the military top brass called the leftist leader the “legitimate president” and Guaido’s move a “coup.” Following Padrino’s lead, eight other top generals declared their “absolute loyalty and subordination” to Maduro, live on state television.

Two generals are also among those jailed for an alleged assassination attempt on August 4, when a pair of drones exploded near Maduro at a military procession.

Guaido, the 35-year-old speaker of Venezuela’s opposition-controlled legislature, was “inaugurated” as acting president Wednesday before thousands of demonstrators, declaring that Maduro’s re-election in a widely-condemned vote was illegitimate. The United States and a string of Latin American countries quickly backed Guaido.

But his move did little to change the calculus of power on the ground. Maduro, who has presided over a spiraling political and economic crisis, still controls both the army and the Supreme Court. Guaido has offered an amnesty to soldiers who break ranks with Maduro, in an effort to win over potential defectors, including both officers and rank-and-file troops who may be weary of cracking down on their own people.

He may stand a chance of getting a critical mass of soldiers to break ranks, some experts say. “When you take the kind of step that he’s taken, you have to know what kind of support you have, especially within the military,” political scientist Luis Salamanca told AFP.

But it will not be easy to break the military monolith. “Maduro relies on the military, and they rely on him, to enrich themselves and avoid facing trial if the regime ultimately falls,” said Salamanca.

Doubling down on one of the strategies of his late mentor, the leftist firebrand Hugo Chavez, Maduro has given the military vast power. Chavez gave 25 percent of the posts in the executive branch to the military. Under Maduro, that figure rose to as high as 44 percent — though it has recently fallen again, to 26 percent, according to the watchdog group Control Ciudadano.

“Being a minister isn’t the source of wealth it once was,” said the group’s director, Rocio San Miguel, adding that generals today would rather get rich presiding over things like subsidized food imports — which are rife with corruption, amid a devastating crisis that has left supermarket shelves practically bare.

Still, nine of Maduro’s 32 ministers are from the military, which also controls powerful institutions including state oil company PDVSA and the intelligence services. The list also includes a TV network, a bank, an auto manufacturer, and a mining, oil and gas company.

The more unpopular Maduro gets, the more the military’s power grows, according to many analysts. The president has called the army the “backbone” of the country. He also relies heavily on the National Guard and the country’s 1.6 million civilian militia members.

Doubling down on one of the strategies of his late mentor, the leftist firebrand Hugo Chavez, Maduro has given the military vast power.

‘Devil’ in the Barracks

But as even the defense minister admits, the “devil” has crept into Venezuela’s barracks — his word for anti-Maduro plots. On Monday, 27 soldiers stole a cache of weapons and staged a brief mutiny before being arrested at the Caracas barracks where they were entrenched.

Two generals are also among those jailed for an alleged assassination attempt on August 4, when a pair of drones exploded near Maduro at a military procession. Last year, another 180 troops were arrested on conspiracy charges, according to San Miguel. Many of them were tortured, says Human Rights Watch.

The New York Times reported in September that US officials had met with Venezuelan military officers about a coup plot that was ultimately aborted. Maduro’s claims the United States has a $120-million fund for “buying” Venezuelan officers.

And there are signs of cracks in what was once the security forces’ steadfast loyalty. More than 4,300 National Guards members deserted in 2018, according to San Miguel. Most military top brass are torn between “following Maduro at the risk of going down with him” and “saving their own skins,” said Salamanca.