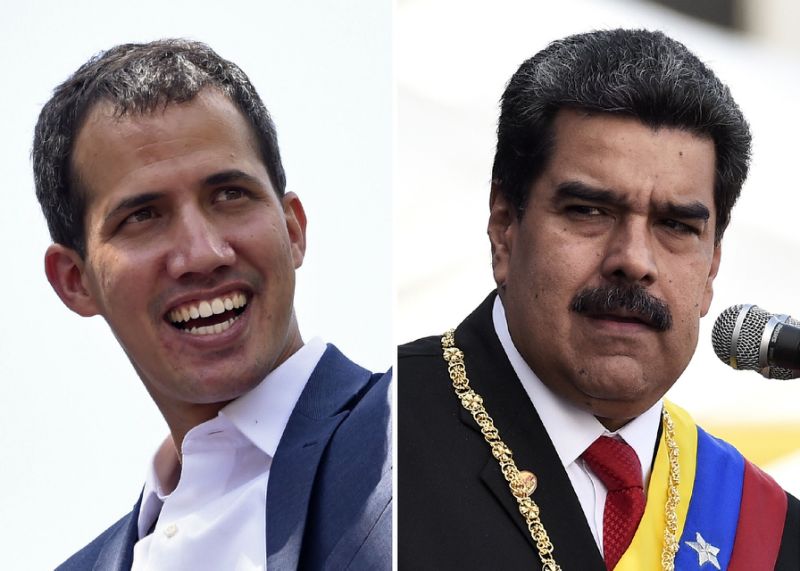 Venezuelan opposition leader Juan Guaido vowed Tuesday to increase pressure on President Nicolas Maduro, who in turn promised to crush a “crazed minority” that wants to remove him from power.

The 35-year-old National Assembly leader returned home to a hero’s welcome on Monday, having defied a ban on leaving the country to embark on a 10-day tour of South American allies and remains free after returning despite the threat of arrest by the government.

Venezuela is wracked by a humanitarian crisis that has seen poverty soar, with an estimated 2.7 million people leaving the country since 2015.

“They’re drowning in contradictions, they don’t know how to respond to Venezuela’s people,” Guaido told reporters. “They thought the pressure had reached its zenith, but it’s only just beginning.” On Tuesday, a national holiday, he met public sector union leaders.

“Public sector workers have lost practically all their rights, we have no other option but to call for a civic strike,” said Guaido, without giving further details. Maduro, meanwhile, pressed his supporters to hold “anti-imperialist” marches Saturday to counter fresh protests planned by Guaido.

“Today more than ever, we are victorious against the conspiracy, against blackmail, while a crazy minority continues with their hatred,” he said in his first public comments since Guaido’s return.

Battered by an economic meltdown, Venezuela descended into a major political crisis when Guaido declared himself interim president in January and asserted that Maduro was no longer legitimate.

Recognized by more than 50 countries as Venezuela’s acting president, Guaido flouted a government travel ban on February 22 to head off and rally support for his bid to oust Maduro. When he returned to Caracas — his latest challenge to Maduro’s authority — Guaido announced to tens of thousands of supporters his plans for new protests.

He has vowed to set up a transitional government and hold new elections. US envoy Elliott Abrams said that given Maduro’s low popularity, it would be “a gift” if he decided to run in fresh polls. “That’s ultimately a decision for Venezuelans to make,” Abrams said. He also warned the US is weighing more sanctions to pressure Maduro.

Read more: Trump tells Venezuela military to back Guaido or ‘lose everything’

As part of his challenge to Maduro, Guaido is attempting to take control of the state bureaucracy, which he considers to have been “kidnapped” through blackmail and persecution. Unions from the oil industry, basic services, the public bank and local government took part in Tuesday’s meeting, union leader Ana Yanez told AFP.

“The public administration is practically paralyzed. In the town halls, people only go to work three days a week and even then barely half the day,” said Yanez. Maduro finally made an appearance in the late afternoon to lead a military parade paying tribute to his predecessor Hugo Chavez on the sixth anniversary of the socialist firebrand’s death.

US envoy Elliott Abrams said that given Maduro’s low popularity, it would be “a gift” if he decided to run in fresh polls.

Standing in front of Chavez’s mausoleum, Maduro also called on his supporters to take to the streets on Saturday, to mark “four years since” then-US president Barack Obama first announced sanctions against the socialist government. Maduro has done this before, calling his own counter-demonstration every time Guaido announces a protest.

Both attract thousands of supporters, but the opposition gatherings usually have the edge in numbers. Maduro had been active on Twitter earlier in the day, again paying tribute to Chavez. “Thanks to your teachings and your example we’re continuing the permanent fight against those who tried so many times to extinguish your voice,” wrote Maduro.

During his travels, Guaido met US Vice President Mike Pence and the leaders of Colombia, Brazil, Argentina, Paraguay, Chile and Ecuador. He crossed into Colombia on February 23 to lead a bid to bring in humanitarian aid stockpiled near the border, but the move was blocked by the military and security forces in a day of chaos and bloodshed.

Venezuela is wracked by a humanitarian crisis that has seen poverty soar, with an estimated 2.7 million people leaving the country since 2015.

Reuters - 24 July 2021
PM Imran Khan is one of many targets being secretly watched by Israeli spy software, the Pegasus. It is reportedly used by Modi government against Pakistan leaders and his political opponents.