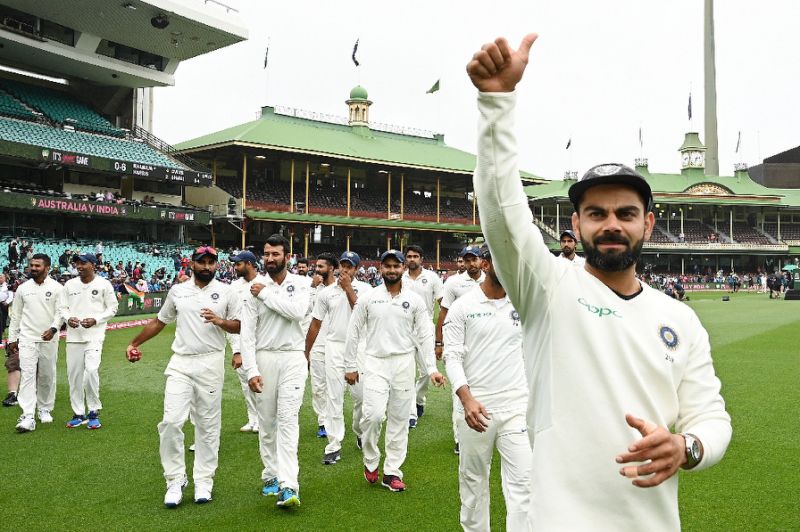 India captain Virat Kohli said Tuesday he was “very very happy” after becoming the first-ever player to clinch all three top honours, including cricketer of the year, in the International Cricket Council awards.

Kohli, who recently led India to their maiden Test and one-day series triumph in Australia, was also voted the Test and ODI men’s player of the year as the cricket’s world governing body announced its annual honours, chosen by former players and veteran journalists.

“It feels amazing. It’s a reward for all the hard work that you do throughout the calendar year. I feel really grateful and very, very happy with the team doing well at the same time myself performing,” Kohli said in a statement.

“Having recognition at the global level from the ICC is something you feel proud of as a cricketer because you understand that there are many players playing the game.”

The 30-year-old Kohli, who is married to Bollywood actress Anushka Sharma, has reached superstar status in cricket-mad India, after first coming into the limelight when he led the South Asian nation to victory in the 2008 Under-19 World Cup.

The 30-year-old Kohli, who is married to Bollywood actress Anushka Sharma, has reached superstar status in cricket-mad India.

“This is well deserved recognition for extraordinary talent,” ICC chief executive David Richardson said of Kohli. “His regard for the game and particularly for Test cricket is also recognised and appreciated. He is passionate in his support of the longest form of the game and its continued importance.”

Australia opener Aaron Finch won the T20 performance of the year award for the second time for his 172 — the highest-ever individual T20 score — against Zimbabwe in Harare last July. India’s Rishabh Pant was named the emerging player of the year, while Scotland batsman Callum MacLeod took home the associate cricketer of the year trophy.

The 21-year-old Pant became the first Indian wicketkeeper to score a Test century in England, and equalled the record for the most catches taken in a Test, with 11 in Adelaide in December.

Why boundaries in music exist between India & Pakistan?