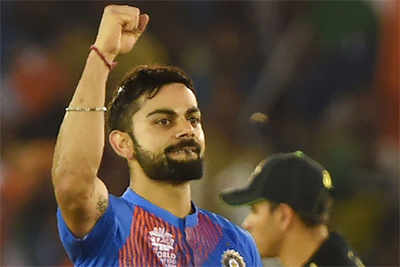 India and Pakistan are all set to lock horns in the final of the coveted Champions Trophy on Sunday. Though India is a very well-balanced side with quality resources in both departments of the game, there is one man that stands heads and shoulders above the rest. He is the impetuous, the brilliant, and the inimitable Virat Kohli.

Let us reflect on this dynamic Indian skipper, who from an unassuming young lad some 9 years ago is now one of the very best.

Read more: India vs Pakistan: A final which everyone dreamed of but few predicted

He never looked back!

When a chubby boy from Delhi made his debut against Sri Lanka back in 2008 there was very little to suggest that we were seeing a man who was going to redefine limited overs batting forever. The man who will redefine the fitness levels of an International Cricketer. The man who will take over seamlessly from the greatest batsman the country has ever produced. He has redefined the way Indians look at the target now for nothing seems unachievable anymore. He has redefined the way Indians see their skipper after being served by charismatic MS Dhoni for a decade.

What really separates Virat from the rest, more than the runs he has scored or the matches he has single handily won for his country or franchise, is his desire to better himself every day that separates him from the rest.

Let’s get a few things straight first. I don’t think we should compare players across generations. Not only because it’s futile but also because everything around limited overs cricket has changed so much in last 20 years itself that it is barely recognizable! Rules have changed, types of pitches have changed, even the way bowlers approach bowling has changed. So if a certain Sachin Tendulkar is averaging in the mid-40s you simply can’t compare it with the likes of Amla or Virat who are making runs at more than the average of 50.

So what really separates Virat from the rest? For me, more than the runs he has scored or the matches he has single handily won for his country or franchise, it’s his desire to better himself every day that separates him from the rest. There is a famous story which Virat himself told recently that he didn’t like the way he looked during one of the IPL seasons, he felt that he didn’t look like how a sportsman or a cricketer of this level should look. So then began the intense and almost torturous exercise to refrain from everything that would limit his performance on the field. It wasn’t easy, he felt like eating bed sheets on one of those nights because of his cravings. His teammates have spoken about how boring his diets are, his training videos are all on his Instagram page. All these things tell us about his hunger to better himself every single day. This tells us mere mortals about what it really takes to succeed at the highest level of the game and why not everyone despite having the talents makes it to the top.

Twenty-seven International ODI hundreds at the age of 28, four hundreds in a single IPL season, phenomenal chasing record (he averages more than 90 when India have won batting second), all these stats tells us that he is not just any good contemporary batsman. During his semifinal’s knock against Bangladesh, he became the fastest ever to score 8000 runs. 8000 runs! Believe me, he still has at least 5-6 years perhaps even a decade of cricket left in him!

He still has to score runs in England because for some reason the pundits in this game don’t call you truly great unless you have scored runs there.

While all the above stats are mainly from limited over internationals he is not far away from the best in Tests as well. A format where he self-admittedly began slowly with various doubts in his heads. But he has begun conquering them as well. As soon as he took over from MS Dhoni as the Test Captain, he played one of the best fourth innings knock in Adelaide against Australia where although India lost the game his approach of going after the win at all cost was refreshing to see. In India’s marathon home season, he scored four double hundreds against varied attacks, different grounds, different kinds of pitches, and stamped his authority even in this format of the game.

He still thinks he has a long way to go. He dreams of winning a World Cup for India. He wants his team to be a force in Test Cricket when they travel abroad which is a huge challenge considering the records of captains before him. He still has to score runs in England because for some reason the pundits in this game don’t call you truly great unless you have scored runs there. But you just feel that nothing is beyond him that he will defeat every hurdle that comes in his path to greatness because that’s what he craves for everyday!

Saurav Jha is a Software Engineer based in New Delhi, India. He has a penchant for writing on cricket. The views expressed in this article are the author’s own and do not necessarily reflect Global Village Space’s editorial policy.