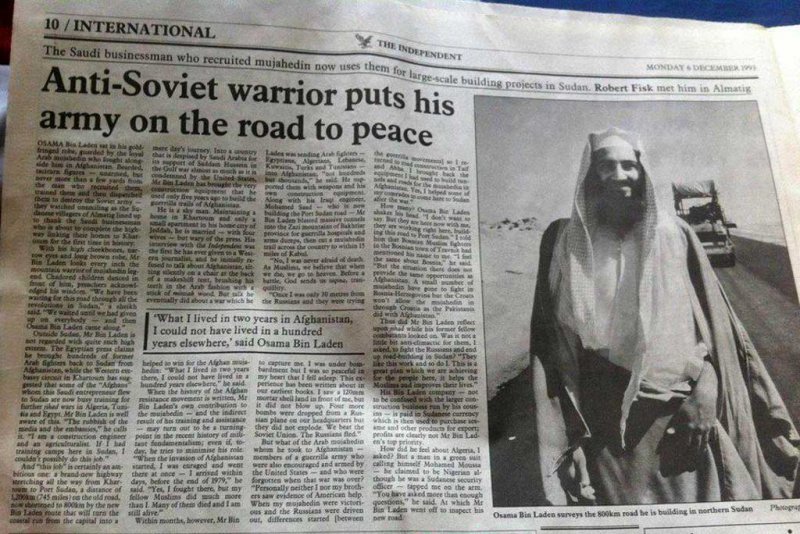 Karl Marx famously said that history repeats itself, first as tragedy, second as farce. The only difference between the Afghan jihad back in the ‘80s that spawned Islamic jihadists like the Taliban and al-Qaeda for the first time in history and the Libyan and Syrian civil wars, 2011-onward, is that the Afghan jihad was an overt jihad: back then, the Western political establishments and their mouthpiece, the mainstream media, used to openly brag that the CIA provides all those AK-47s, RPGs, and Stingers to the Afghan so-called “freedom fighters” to combat the Soviet troops in Afghanistan.

They have waged covert jihads against the Arab-nationalist Gaddafi regime in Libya and the anti-Zionist Assad regime in Syria.

After the 9/11 tragedy, however, the Western political establishments and corporate media have become a lot more circumspect, therefore this time around, they have waged covert jihads against the Arab-nationalist Gaddafi regime in Libya and the anti-Zionist Assad regime in Syria, in which Islamic jihadists (aka terrorists) have been sold as “moderate rebels” with secular and nationalist ambitions to the Western audience.

Read more: Syria’s Al-Qaeda not on US’ terror watch-lists: Who is supporting terrorism?

Since the regime change objective in those hapless countries went against the mainstream narrative of ostensibly fighting a war against terrorism, therefore the Western political establishments and the corporate media are now trying to muddle the reality by offering color-coded schemes to identify myriads of militant and terrorist outfits that are operating in Syria: such as the red militants of the Islamic State and al-Nusra Front, which the Western powers want to eliminate; the yellow Islamic jihadists, like Jaysh al-Islam and Ahrar al-Sham, with whom the Western powers can collaborate under desperate circumstances; and the green militants of the Free Syrian Army (FSA) and a few other inconsequential outfits, which together comprise the so-called “moderate” Syrian opposition.

If we were to draw parallels between the Soviet-Afghan jihad of the ‘80s and the Syrian civil war of today, the Western powers used the training camps located in the Af-Pak border regions to train and arm Afghan “Mujahideen” against the Soviet troops in Afghanistan.

Similarly, the training camps located in the border regions of Turkey and Jordan are being used to provide training and weapons to Sunni Arab militants to battle the Shi’a-dominated Syrian regime with the collaboration of Turkish, Jordanian, and Saudi intelligence agencies.

During the Afghan jihad, it is a known historical fact that the bulk of so-called “freedom fighters” was comprised of Pashtun Islamic jihadists, such as the factions of Jalaluddin Haqqani, Gulbuddin Hekmatyar, Abdul Rab Rasul Sayyaf, and scores of others, some of which later coalesced together to form the Taliban Movement.

Similarly, in Syria, the majority of so-called “moderate rebels” is comprised of Sunni Arab jihadists, such as Jaysh al-Islam, Ahrar al-Sham, Al-Nusra Front, the Islamic State, and myriads of other militant groups, including a small portion of defected Syrian soldiers who go by the name of Free Syria Army (FSA).

Moreover, apart from Pashtun Islamic jihadists, various factions of the Northern Alliance of Tajiks and Uzbeks constituted the relatively “moderate” segment of the Afghan rebellion, though those “moderate” warlords, like Ahmad Shah Massoud and Abul Rashid Dostum, were more ethnic and tribal in character than secular or nationalist, as such.

Similarly, the Kurds of the so-called “Syrian Democratic Forces” can be compared with the Northern Alliance in Afghanistan. The socialist PYD/YPG Kurds of Syria, however, were allied with the Baathist regime against the Sunni Arab jihadists for the first three years of the Syrian civil war, i.e. from August 2011 to August 2014.

At the behest of American stooge in Iraqi Kurdistan, Massoud Barzani, the Syrian Kurds have switched sides in the last couple of years after the United States policy reversal and declaration of war against one faction of the Syrian opposition, the Islamic State, when the latter overstepped its mandate in Syria and overran Mosul and Anbar in Iraq in June 2014, from where the US troops had withdrawn only a couple of years ago in December 2011.

Raising funds for proxy wars from the Gulf Arab States allows the Western executives the freedom to evade congressional scrutiny.

Regarding the Western powers’ modus operandi of waging proxy wars in the Middle East, since the times of the Soviet-Afghan jihad during the eighties, it has been the fail-safe game plan of the master strategists at NATO to raise money from the oil-rich emirates of Saudi Arabia, Qatar, UAE, and Kuwait; then buy billions of dollars’ worth of weapons from the arms’ markets of the Eastern Europe; and then provide those weapons and guerilla warfare training to the disaffected population of the victim country by using the intelligence agencies of the latter’s regional adversaries. Whether it’s Afghanistan, Chechnya, Libya or Syria, the same playbook has been executed to the letter.

Read more: ISIS leader Abu Bakar al-Baghdadi killed: who will be his successor?

More to the point, raising funds for proxy wars from the Gulf Arab States allows the Western executives the freedom to evade congressional scrutiny; and the benefit of buying weapons from the unregulated arms’ markets of the Eastern Europe is that such weapons cannot be traced back to the Western capitals; and using jihadist proxies to achieve strategic objectives has the advantage of taking the plea of “plausible deniability” if the strategy backfires, which it often does. Remember that al-Qaeda and Taliban were the by-products of the Soviet-Afghan jihad, and the Islamic State and its global network of terrorists are the blowbacks of the proxy war in Syria.

Fighting wars through proxies allow the international power brokers the luxury of taking the plea of “plausible deniability” in their defense and at the same time, they can shift all the blame for wrongdoing on the minor regional players.

On the subject of the supposed “powerlessness” of the US in the global affairs, the Western think tanks and the corporate media’s spin-doctors generally claim that Pakistan deceived the US in Afghanistan by not “doing more” to rein in the Taliban; Turkey hoodwinked the US in Syria by using the war against Islamic State as a pretext for cracking down on Kurds; Saudi Arabia and UAE betrayed the US in Yemen by mounting airstrikes against the Houthis and Saleh’s loyalists; and once again Saudi Arabia, UAE, and Egypt went against the ostensible policy of the US in Libya by destabilizing the Tripoli-based government, even though the renegade general in eastern Libya, Khalifa Haftar, is an American stooge who had lived for two decades in the US right next to the CIA’s headquarter in Langley, Virginia.

If the US policymakers are so naïve then how come they still control the global political and economic order? This perennially whining attitude of the Western corporate media that such and such regional actors had betrayed them otherwise they were on the top of their game is actually a clever stratagem that has been deliberately designed by the spin-doctors of the Western mainstream media and foreign policy think tanks to cast the Western powers in a positive light and to vilify adversaries, even if the latter are their tactical allies in some of the regional conflicts.

Read more: Escalation of the Syrian conflict: Is the US hurting Syria more than ever?

Fighting wars through proxies allow the international power brokers the luxury of taking the plea of “plausible deniability” in their defense and at the same time, they can shift all the blame for wrongdoing on the minor regional players. The Western powers’ culpability lies in the fact that because of them a system of international justice based on sound principles of morality and justice cannot be constructed in which the violators can be punished for their wrongdoing and the victims of injustice, tyranny, and violence can be protected.

Leaving the funding, training, and arming aspects of insurgencies aside, but especially pertaining to conferring international legitimacy to an armed insurgency, like the Afghan so-called “freedom struggle” of the Cold War, or the supposedly “moderate and democratic” Libyan and Syrian insurgencies of today, it is simply beyond the power of minor regional players and their nascent media, which has a geographically and linguistically limited audience, to cast such heavily armed and brutal insurrections in a positive light in order to internationally legitimize them; only the Western mainstream media that has a global audience and which serves as the mouthpiece of the Western political establishments has perfected this game of legitimizing the absurd and selling Satans as saviors.