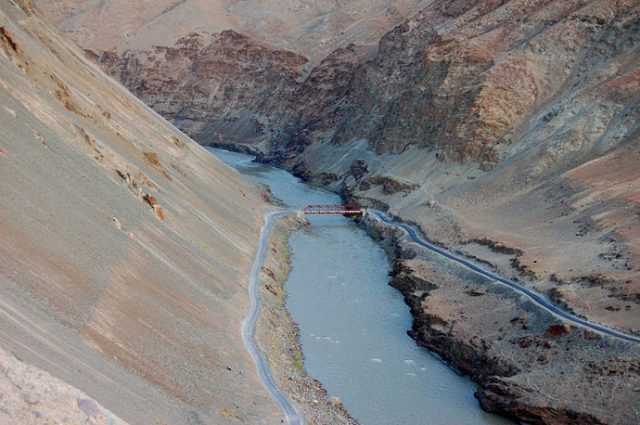 Pakistan and India are holding the second round of talks on India’s violation of Indus Water Treaty, in Lahore on Thursday. The two sides will discuss the two under-construction controversial water reservoirs and hydro power projects by India in violation of the Indus Water Treaty. Pakistan’s Commissioner for Indus Water Syed Meher Ali Shah and his Indian counterpart P.K Saxena are leading their respective delegations at the talks.

Earlier, on the first day of talks yesterday, Pakistan reiterated its serious reservations over construction of 1000-MW PakalDul and 48-MW Lower Kalnai hydroelectric projects on two different tributaries of River Chenab by India. A joint statement will be issued after completion of the two days talks today.

The first round of two-day Pakistan-India water talks concluded here yesterday with Indus water commissioners of both the countries sharing water release data and other technical information with each other.

Although no official words came out after the meeting, sources however said Pakistani side raised objections to two controversial hydropower projects undertaken by India on Chenab River in Occupied Kashmir.

During the meeting, Indus Commissioner of Pakistan raised objections on designs of PakalDul and Lower Kalnai, two controversial water repositories also hydro-power projects, sources said. Pakistan asked for reduction in height of PakalDul Dam by five meters and elevating gates of PakalDul spillway by 40 meters further above the sea-level. Indian delegation was informed that construction of the projects with existing designs will be a clear violation of Indus Waters Treaty signed between the two countries in 1960.

September 19, 196o was the date of the signing of the Indus Basin treaty by India and Pakistan. The agreement signified the end of a long dispute between the two countries and opened the door for increased economic development in the region. Though the treaty has survived India-Pakistan wars of 1965, 1971 and 1999, this time India is evaluating its pros and cons, indicating that the government may look at options to claim water resources without breaking the alliance.

Tensions have risen between India and Pakistan over the former’s violation of the accord. Pakistan has complained that India has violated a World Bank-mandated pause, placed in 2016, by completing the controversial Kishanganga project.

Pakistan states that both Kishanganga (330 megawatts) and Ratle (850 megawatts) contravene the Indus Water Treaty’s restrictions on the construction of run-of-the-river plants. The plants are respectively on a tributary of the Jhelum and the Chenab rivers.

Analysts believe that the case could be resolved through the appointment of neutral experts. Experts believe that the stance adopted by Pakistan is justified, but feel there was a lack of seriousness on the Pakistani side. However, as the new government in Islamabad cites water as one of its main concerns, there are hopes that it will focus on resoling water disputes with its neighbors.

According to the World Resource Institute, the country is among the leading five nations that face extremely high water scarcity and low access to safe drinking water and sanitation. Similarly, the UN has categorized Pakistan amongst those few unfortunate countries where water shortage will destabilize and jeopardize its existence in the next few decades.

India Prime Minister Narendra Modi previously stated that ‘water and blood can’t flow together’. He implied that India has an option to stop rivers flooding from IOK to Pakistan; three rivers, Indus, Jhelum, and Chenab came into Pakistan’s part under IWT. Pakistan reacted furiously to Modi’s statement and maintained that if India tried to abandon Indus water treaty, it will be considered as an ‘act of war’.

India and Pakistan fought three wars – 1965, 1971 and 1999- over Kashmir, however, experts fear that water conflict could spark forth and deadliest war between nuclear countries in the future.