Water war between Pakistan and Afghanistan? 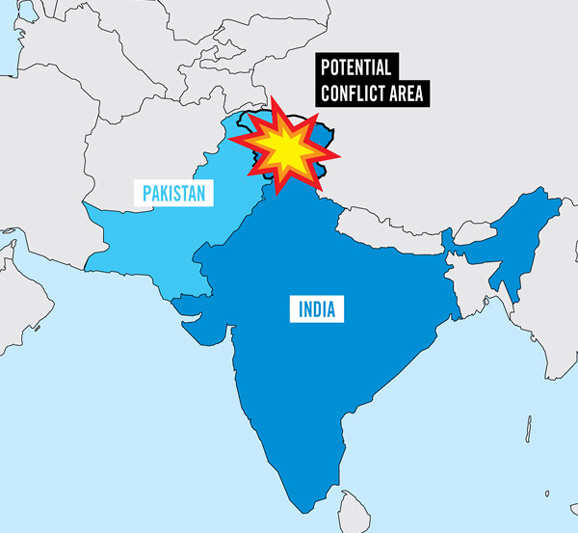 Overshadowed by the precarious state of the security situation in both the countries, culminated over years of distrust and divergent objectives, the water crisis is the next major hurdle which both Pakistan and Afghanistan need to cross in order to minimize the bilateral disputes.

Kabul River which originates in the Hindu Kush mountain range in Afghanistan and makes its way into Pakistan where it becomes the part of Indus River near Attock. The proportionate sharing of the resources has been a bone of contention for both sides still nothing substantial in terms of international mediation or bilateral diplomacy has been achieved.

Afghanistan, a predominantly underdeveloped country where a huge part of its population lacks access to the clean water for drinking and sanitary purposes, depends on the glaciers in the Hindu Kush for its source of fresh water. As the result of global warming and increased temperatures, the glaciers are shrinking at an alarming pace which is making the policymakers in Afghanistan concerned about future water needs.

It is very important to work out an equitable arrangement for the usage of water from the Kabul River so that the needs of both countries are addressed.

The water originating in Afghanistan, after crisscrossing in the Afghan mainland enters in Iran and Pakistan. However, in terms of written accords over the issue, Afghanistan just has a bilateral treaty with Iran which was signed back in 1973 and to which, Afghan officials believe, Iran is not adhering.

On the other hand, there is no such treaty between Pakistan and Afghanistan over the water coming into Pakistan, and used for irrigation and various other projects. As for Pakistan, several attempts at an agreement have come up short. In 2006, the World Bank consulted with Afghanistan and Pakistan over a joint treaty on the Kabul River basin.

But the intervention of the World Bank did not result in an optimal outcome for both sides, and conflict continued. In 2011, the Ministry of Water and Power of Pakistan once again asked for the intervention of the United States and World Bank in achieving a water treaty with Kabul to avoid disputes on water-sharing issues. Once again, the negotiations failed and water-sharing has become a potential troublemaker between the two neighbors.

Since the time Pakistan has started to fence the long and hard terrain of Durand line, there have been multiple violent clashes between Pakistan and Afghanistan forces over the demarcation which, from the Afghan side, was never an international border. On top of that, there is a growing resentment from both the sides for allowing the territory to be used for non-state elements for their activities.

The glaciers are shrinking at an alarming pace which is making the policymakers in Afghanistan concerned about future water needs.

The nature and propensity of these disputes to be resolved first at urgent bases have suppressed the water issue from escalating, but given the severity of the resource, it is most likely to become the next thorn of the way. For Pakistan, Kabul River is another reliable water resource to replenish the needs at a time when India is up to the water aggression and violation of Indus Water Treaty.

Afghan government with the financial and technical support of India had planned construction of 12 reservoirs on the Kabul River that would generate 2400 megawatts electricity. While it is certainly a development boost for Afghanistan, the one-sided abatement of the water flow would cause problems for the agriculture sector in Pakistan. Eventually, the unresolved disagreement over territorial and water resource sharing would lead to the active and hot western frontier which is not viable from defense and strategic point of view.

Similarly, for Afghanistan, there are more pressing issues at hand rather letting a potential dispute linger on and become the cause of another feud. Therefore, it is very important to work out an equitable arrangement for the usage of water from the Kabul River so that the needs of both countries are addressed.

After U.S embassy in Jerusalem, Trump to recognize Israeli annexation of Golan Heights

Global recession is inevitable: So how will Pakistan save its economy?