This weekend, thousands of yellow vests will return to the roadside to mark the first anniversary of a rebellion which badly rattled the government, forcing Macron to revise his ambitious reform agenda. 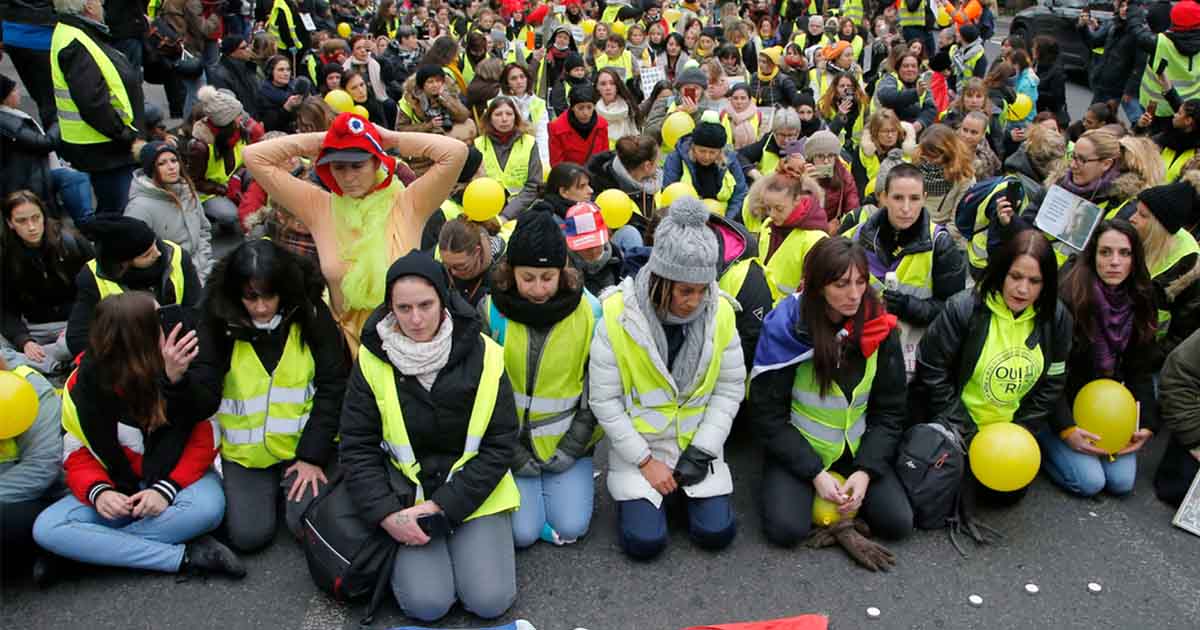 The only traces of the six-month battle waged at the Montabon roundabout in northwest France are the French flag, a luminous yellow vest hoisted on a pole high above the ground, and a few empty food cans rusting in the mud.

This windswept junction in the rural Sarthe region was the local rallying point in the nationwide campaign against fuel taxes, which began in November 2018 and quickly ballooned into a full-scale revolt.

"We don't have a future in France."

In an orchard next to the road, a group of struggling workers, pensioners, job seekers, drifters and dreamers erected a wooden shelter. There, they gathered each day to share a meal and strategize, swapping stories of hardship in an area squeezed by factory closures.

They celebrated Christmas, New Year and wedding anniversaries together, creating one of the most enduring of the hundreds of roadside camps set up by the yellow vests to protest policies seen as skewed toward well-off city-dwellers.

This weekend, thousands of yellow vests will return to the roadside to mark the first anniversary of a rebellion which badly rattled the government.

“It was like Noah’s ark,” said David Bruzzi, a 49-year-old mechanic who was one of the camp’s leaders.

“It wasn’t just about beating up on (President Emmanuel) Macron,” Bruzzi told AFP during a weekly gathering with a handful of other roundabouts “veterans” in a shed on the fruit farm that hosted the Montabon camp.

Read more: What to do next? French yellow vests hold national assembly

“It was about looking after people in the area and filling shopping bags” for hard-up protesters, he said.

This weekend, thousands of yellow vests will return to the roadside to mark the first anniversary of a rebellion which badly rattled the government, forcing Macron to revise his ambitious reform agenda.

Others will travel to Paris, Bordeaux and other big cities to take part in the 52nd straight week of street protests, several of which ended in scenes of looting and arson that made headlines worldwide.

Whether the anniversary can breathe new life into a movement whose turnout has shrunk from 282,000 protesters on November 17, 2018, to just a few thousand nationwide on recent Saturdays, remains to be seen.

In an orchard next to the road, a group of struggling workers, pensioners, job seekers, drifters and dreamers erected a wooden shelter.

For David’s wife Vanina, a 44-year-old service station employee who spent six months at the barricades, the anniversary is the chance to say “We are here, we are not dead.” Around the world, participants in leaderless revolts from Hong Kong to Chile have cited the yellow vests as a source of inspiration.

But in France, the movement’s gains are widely questioned by its own rank-and-file. Most of them dismiss the 10-billion-euro ($11 billion) package of measures for the working poor and pensioners announced by Macron late last year as “peanuts”.

Read more: French police gear up for another showdown with yellow vests

Sitting at a bench in a shed stacked with crates of apples, Vanina ventures that the yellow vests’ biggest achievement was to spur other disgruntled groups, such as teachers and hospital workers, to take their grievances to the streets.

“We can always say that if we hadn’t done it, things would be worse,” said Jean-Jacques Brossay, a grizzled 63-year-old pensioner.

Around the world, participants in leaderless revolts from Hong Kong to Chile have cited the yellow vests as a source of inspiration.

Not everyone is convinced that history will be kind to the yellow vests. Marco Beaulaton, a retired technician who took part in a 10-day blockade of a petrol refinery in the city of Le Mans, 45 kilometres north of Montabon, is among the sceptics.

Like David Bruzzi and the Montabon roundabout, 61-year-old Beaulaton remembers the blockade as an “unforgettable moment of solidarity and sharing”, with birthdays celebrated “around a bonfire of burning pallets”.

But as the days passed, the presence of far-left and far-right elements spoiling for a fight with the police grew, alienating many others. Beaulaton, who pleaded for “Mandela and Gandhi-style” pacifism, is convinced that the movement shot itself in the foot by refusing to condemn the violence of a radical minority.

“What people want is evolution, not revolution,” he argued. “The French already had their revolution and paid the price in blood.”

One of those on the receiving end of the protesters’ anger was Damien Pichereau, a fresh-faced local man elected to parliament on Macron’s centrist ticket in 2017. A year earlier, newcomers like 31-year-old Pichereau, who grew up in a Sarthe village of 250 people, were being hailed as a breath of fresh air in a jaded political landscape.

France's Yellow Vest protests have been raging for almost a year. How does this end? pic.twitter.com/Kl8HKydNSv

But for the yellow vests, Macron’s army of young devotees were objects of contempt. Pichereau recalls one demonstrator telling him “You don’t know how much I’d like to put a bullet in you”. In February, his constituency office was smashed by hooded demonstrators during a yellow vest protest.

And yet like Macron, who told Time magazine in September that the yellow vests had been “good for me”, Pichereau said he believed the movement was a force for positive change.

Pointing to three months of town hall debates organised by Macron last spring to try to tamp down the protests, Pichereau insisted: “We do politics differently now. There’s more dialogue.” No amount of consultation, however, is likely to definitively bury the yellow vest movement.

Around 600 yellow vest delegates gathered in Montpellier last week, where they backed trade union calls for mass strike action on December 5 over the government’s pension reforms. “We’ll see then whether it kicks off again,” Vanina Bruzzi said.