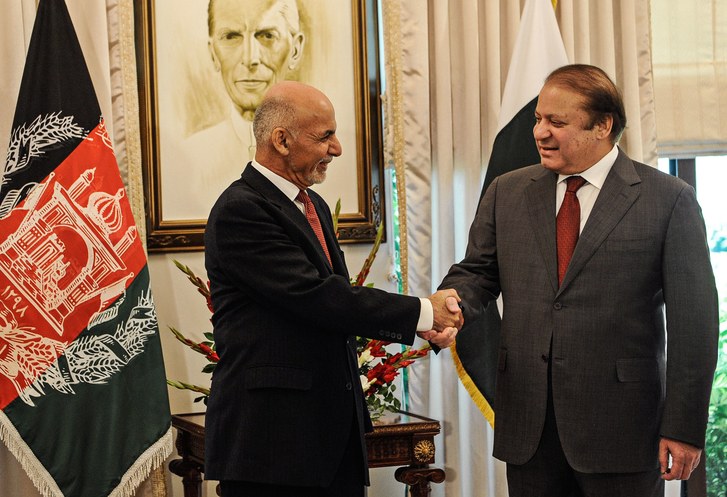 Pakistan’s bilateral relations with its eastern and western neighbors severely deteriorated during the last two years. Though Islamabad did its best to engage constructively both New Delhi and Kabul, yet failed due to Premier Modi’s domestic politics (state elections) priorities and President Ghani’s internal security challenges.

Instead of addressing the real cause of Kashmiri uprising, the Modi government has continuously been blaming Pakistan.

Indian Prime Minister Modi used anti-Pakistan catchphrases for mustering the support of radicalized Hindus during the state elections in India. Similarly, blaming Pakistan is the famous tactic of the Unity Government in Kabul to conceal its failure of establishing its writ in eastern and southern Afghanistan. Despite the baseless allegations, the Pakistani ruling elite continues its efforts to engage both the neighbors constructively for regional peace and prosperity.

Jindal’s trip to Pakistan: An effort to restore dialogue?

The recent Murree yatra of the Indian business tycoon Sajjan Jindal’s may be an attempt to break the stalemate between India and Pakistan. Many analysts opine that it was not a business trip of Mr. Jindal. It was an attempt by India and Pakistan to restart the stalled dialogue. Perhaps, the dialogue is the only option for both the belligerents to decrease the tension at the border. Importantly, the restart of dialogue automatically quashes Premier Modi’s policy to ‘isolate Pakistan’.

Despite the probable positive aspect of the visit, it has unleashed a pessimistic debate in the country. The opposition parties questioned the timing and tried to establish the visit was a mere business trip. The media discourse and conspiracy theorists seem successful in heightening distrust in the domestic politics of the country.

The resumption of a dialogue between New Delhi and Islamabad would not be acceptable to the preachers and followers of Hindutva.

The biggest problem while dealing with New Delhi is the prevalent chauvinistic domestic Indian political atmosphere. Premier Modi, during the recent state elections campaign, used warmongering as a tactic for mustering the support of radicalized hawkish Hindu voters.

The Bharatiya Janata Party (BJP) secured a majority in the important state elections and constituted its governments. The campaign, however, amplified anti-Pakistan feelings in the Indian society. The resumption of a dialogue between New Delhi and Islamabad would not be acceptable to the preachers and followers of Hindutva.

Since one year, the innocent Kashmiris have been suffering from the brutality of the Indian armed forces. Despite the worst type of state terrorism, the Indian civilian and military law enforcement agencies have failed to restore the writ of the state in the Indian Occupied Kashmir.

The Indian Army occasionally charges Pakistan Army for the mutilation of the dead Indian soldier’s bodies for maligning the latter.

Instead of addressing the real cause of Kashmiri uprising, the Modi government has continuously been blaming Pakistan. Recently, the Indian Army alleged Pakistani border forces for the violation of Line of Control and mutilation of the bodies of its two soldiers.

On May 1, 2017, Inter-Services Public Relations (ISPR) refuted Indian army claims. It stated: “Pakistan Army is a highly professional force and shall never disrespect a soldier, even Indian.” The Indian Army occasionally charges Pakistan Army for the mutilation of the dead Indian soldier’s bodies for maligning the latter.

The death sentence of Kulbhushan Sudhir Jadhav is equally disturbing for the Indian spy establishment and hawks. Jadhav is an Indian Naval Officer, who works for India’s premier intelligence agency, the Research and Analysis Wing (RAW). He was arrested by the Pakistani law enforcement agencies on March 3, 2016, in Balochistan.

He admitted that he was involved in terrorism and other subversive activities inside Pakistan. The Indians expressed their desire for the release of Jadhav. The Government of Pakistan, however, seems reluctant to compromise on the punishment of Jadhav.

Read more: Indian attempts to build tensions at LOC: What is Modi up to now?

Pakistanis are concerned about the fact that the terrorist groups have been receiving financial and intelligence support from both Afghan intelligence and RAW for conducting their terrorist attacks inside Pakistan.

In April 2017, Ehsanullah Ehsan, spokesperson of the Tehreek-e-Taliban Pakistan’s splinter group Jamaat-ul-Ahrar, surrendered to Pakistan Army. He claimed that Indian and Afghan intelligence agencies were financing and supporting terrorist groups to subvert the internal security of Pakistan.

Certainly, the continuity of such nefarious activities of Afghan and Indian intelligence agencies would not be tolerable for the sake dialogue process. Although the Afghan Unity Government constantly levels baseless allegations against Pakistan to camouflage its own failure, yet Islamabad is determined to engage Kabul for cordial bilateral relations between Afghanistan and Pakistan.

The bloody terrorist attacks in February 2017 forced Pakistan to take punitive action to destroy the terrorist sanctuaries located on Afghanistan-Pakistan border. In addition, Islamabad intensified its border management undertakings. It closed legal border crossings. Which affected both sides’ traders. Concurrently, Islamabad is endeavoring to maintain its contacts with Kabul.

To conclude, Pakistan, India, and Afghanistan need to realize the efficacy of the connectivity between/among the neighbors for the prosperity of their people in the twenty-first century. Indeed, the mistrust hinders constructive engagement. Therefore, it’s imperative that they start a sustained dialogue process.

Adnan Sami gets trolled in a unique fashion

Are China and US marching towards a Trade War?