What happened to that ‘invasion’ of America? 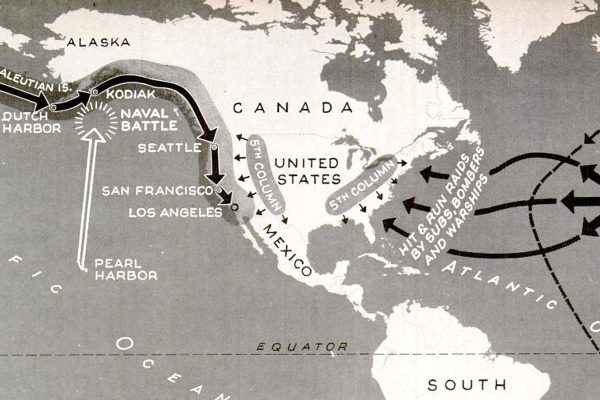 One right-wing group, Americans for Legal Immigration (ALIPAC), was so concerned about the invasion that it even came up with its own defense program. Called “Operation American Shield,” the program (1) supported President Trump’s plan to send troops to the border to defend the United States from the invasion; (2) called on people to volunteer to travel to the border to serve in a supporting role for the troops; and (3) requested people to send in donations to help fund the operation.

We are making plans to go to the border to increase political pressure on leaders in Washington to do their job and defend our border, and we need your immediate support for Operation American Shield…. At this time, ALIPAC believes it is very important we organize citizen volunteers to go observe, report, and protest at the border (DATE TBA) to send a clear message to Washington DC that the current situation must improve and Article 4 of the US Constitution protecting all states from invasion must be upheld by the President, armed forces, and federal agencies…. PLEASE Consider A DONATION of $25, $50, $100, $250, $500, or even $1,000 to help us raise the funds we need to attempt such an ambitious operation. Make a donation of SOME AMOUNT AT THIS TIME TO SHOW US YOU ARE WILLING TO HELP US AFFORD THE THOUSANDS OF DOLLARS IT WILL TAKE FOR US TO ORGANIZE AMERICAN CARAVANS TO GO TO THE BORDER IN MAY!

Some immigrants commit crimes, just as some Americans commit crimes. But such people are subject to being punished under the nation’s criminal-justice system. The commission of a crime by an immigrant doesn’t convert immigration, legal or illegal, into an “invasion” of the United States.

They weren’t the only ones. Long-time conservative proponent Richard Viguerie sent out an email entitled, “Time to Send Troops to The Southern Border,” which stated in part, “Fox & Friends” reported on Sunday morning that a “small army of migrants [is] marching toward the United States.” The UK’s Daily Mail also reports “An army of a thousand migrants from Central America are marching through Mexico to the US where they hope to get in by any means – legal or not.”

And the UK outlet reports, “the number is only growing,” and “So far no one in Mexico has tried to stop them.” What does a normal country do when its border and sovereignty are threatened by a hostile army? It sends troops to defend its border, and in some cases, it may even interdict the hostile army before it can breach the border. This is the situation the United States finds itself in today as a hostile army, variously estimated at one to two thousand – and growing – is crossing Mexico headed toward the United States – and they are not merely a ragtag mob, they are organized.”

Read more: How the US destroyed Afghanistan

Today? Well, if the invasion happened, I certainly haven’t heard about it. There certainly have been no reports of bombs being dropped on Brownsville, Texas, or skirmishes near Laredo, Texas, or anyone being taken as a prisoner of war. In fact, from what I can tell, there hasn’t been one single casualty — not one death or even one minor injury from the invasion.

On April 15, ALIPAC sent out an email announcing the cancellation of Operation American Shield. The reason? Lack of interest. No, not on the part of ALIPAC but rather on the part of its supporters. It seems that not enough people were willing to volunteer to travel to the border to defend our country from the coming invasion.

This is the situation the United States finds itself in today as a hostile army, variously estimated at one to two thousand – and growing – is crossing Mexico headed toward the United States – and they are not merely a ragtag mob, they are organized.”

Imagine that: Conservatives are always willing to act bravely and patriotically by sending U.S. troops to fight in faraway lands but the minute that conservatives are called upon to defend our homeland from invasion, they decide they would rather stay at home and let others do the fighting for them.

Do you remember that movie from the 1970s entitled “Suppose They Gave a War and Nobody Came”? We could modify it by saying: Suppose they gave an invasion and nobody came. Today? I don’t see either Viguerie or ALIPAC talking about the invasion that they were so breathlessly sounding the alarm bells about just two weeks ago. The reason? The whole “invasion” concept that conservatives have used against immigrants has been ridiculous since the get-go.

Read more: Should Trump be jailed for adultery?

An invasion is what the U.S. government did to Iraq, a country that had never attacked the United States. The U.S. government sent soldiers into country and bombers over the country. The soldiers shot and killed people. They fired artillery shells onto businesses and homes. The bombers dropped bombs and fired missiles all across the country. All of this violence succeeded in killing, injuring, incarcerating, and torturing countless innocent people — that is, people who had never attacked the United States. It also succeeded in destroying most of the country — homes, buildings, and infrastructure. It produced massive collateral violence and chaos in the Middle East, including the rise of ISIS.

Immigrants? They just peacefully cross an artificial line called a border in search of a job, attempting to sustain or improve their lives through labor.  No violence. No bombs, bullets, artillery shells, or missiles. No death, maiming, destruction, POW camps, or torture. Just purely peaceful activity, mostly of an economic nature, including by entering into consensual transactions with American employers and landlords.

Conservatives are always willing to act bravely and patriotically by sending U.S. troops to fight in faraway lands but the minute that conservatives are called upon to defend our homeland from invasion, they decide they would rather stay at home and let others do the fighting for them.

Sure, some immigrants commit crimes, just as some Americans commit crimes. But such people are subject to being punished under the nation’s criminal-justice system. The commission of a crime by an immigrant doesn’t convert immigration, legal or illegal, into an “invasion” of the United States.

That’s undoubtedly the real reason that ALIPAC had to cancel its ludicrous call for volunteers to travel the border to help defend America from an impending “invasion” that never happened. Surely it wasn’t cowardice that motivated conservatives to stay at home and refuse to defend their country. Surely it was the realization that our nation was never threatened by an invasion in the first place.

Lack of global leadership spurs instability in the Middle East

Pakistan’s economic survival is based on agriculture: Fix it before we lose the opportunity!