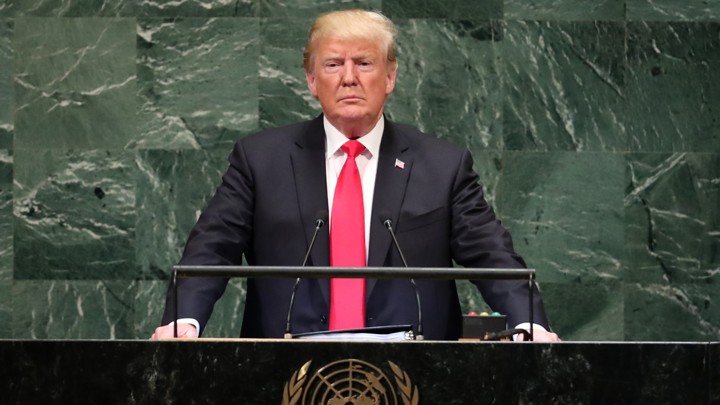 Haneul Na’avi |
US president Donald Trump’s intimidating, hawkish UN General Assembly speech was, at best, an unflinching reaffirmation to US jingoism, despite his election promises to do the opposite.

Trump hurled his 41-minute tirade of diplomatic gaffs and gas lighting at self-determined governments-Syria, Iran, Cuba and Venezuela-and brazenly guilt-tripped the United Nations’ in a manner not seen since Hitler’s 1937 address regarding the defunct League of Nations.

Despite the inconsolable depravity of his words, one should focus more on their timing and intentions in order to decipher the US president’s subversive agenda.

Despite Trump’s calls for rapprochement with China and Russia, the endgame is to supplant them with the petrodollar; evidenced by America’s latest round of Russian sanctions and persistent meddling in the South China Sea

Trump’s UN call for ‘unity and obedience’ reveals several pressing matters for the US military dictatorship behind him, who grow more desperate than ever to fulfill their geopolitical agendas sat behind the claptrap of ‘human rights, peace, democracy, and national sovereignty’.

It has been firmly established that the current US administration is solely in charge of managing eroding dollar diplomacy around the world, and, in the wake of the 9th annual BRICS Summit in Xiamen and flagship Belt and Road Summit held in Hong Kong, are terrified of a massive global divestment in dollar-denominated oil driven by Chinese-led development.

Underneath its harsh, superstructural rhetoric, the Trump administration is attempting to seize two strategic oil shipping routes, the Strait of Hormuz and the Strait of Malacca, in order to usurp the lion’s share of global oil trade from the Asian continent and underpin its petrodollar hegemony.

Interfering with the Strait of Malacca also blackmails another BRICS member—India—by blocking its Andaman Sea conduit via the strait, preventing it from receiving critical oil from none other than, of course, Venezuela

In order to do this, Trump wishes to rally support for a military intervention on Pyongyang and later, Tehran, in order to occupy indispensable maritime shipping lanes to indefinitely frustrate China’s access to the South China Sea, which is inextricably connected to both straits; the reason why Trump singled out the two nations in his address.

The US Energy Information Administration asserts,

The Strait of Hormuz, leading out of the Persian Gulf, and the Strait of Malacca, linking the Indian and Pacific Oceans, are the world’s most important strategic chokepoints measured by volume of oil transit, accounting for a combined 57% of all seaborne oil trade. [EIA]

With a military presence near the Korean peninsula, the Trump administration, with help from its vassals Japan and Taiwan, can eventually obstruct oil transit flowing from both straits, which would stymie China’s access to critical Pacific-Atlantic bottlenecks vital to the One Belt, One Road (OBOR) initiative into Europe, southern Africa, and the Western hemisphere.

This would force the Chinese to rely on land transit and secondary shipping routes, incurring a costly and dangerous journey for OBOR resources and significantly hampering the initiative.

Additionally, one must stress the baselessness of America’s casus belli. It is not in Pyongyang’s material or ideological interests to turn South Korea into a “sea of flames” as many corporate media outlets typically report but to reunify the peninsula using its’ five-point initiative, put in place since DPRK founder Kim Il-Sung spearheaded it to comply with UN Resolution 377.

The Kim Jong-Un administration has begun procuring several nuclear deterrents as a response to the joint US-South Korean Ulchi Freedom Guardian and Foal Eagle military drills, which, over the last 40 years, have continuously violated this resolution by inflaming tensions.

Furthermore, the DPRK consistently states that the drills are the primary motivation for its nuclear programme, and a delegate addressed this to the 9 Aug. Geneva Disarmament Conference,

As long as the U.S. hostile policy and nuclear threat continue, the DPRK, no matter who may say what will never place its self-defensive nuclear deterrence on the negotiating table nor flinch an inch from the road chosen by itself, the road of bolstering up the state nuclear force.

The Rodong Shinmun seconded this in a 22 Sept. article,

The final goal of our State is to achieve equilibrium of force with the U.S. so that the U.S. chief executive may not talk about a military option against the DPRK.

This is precisely why it has installed THAAD systems to target medium and long-range attacks, and not short-range attacks, which are, ironically, a greater danger to Seoul and America’s THAAD programme; a Duran article outlines this in detail

US militarism against Pyongyang expresses the fear that North Korea will attack its vassals or a major American city, not Seoul. This is precisely why it has installed Terminal High Altitude Area Defense (THAAD) systems to target medium and long-range attacks, and not short-range attacks, which are, ironically, a greater danger to Seoul and America’s THAAD programme; a Duran article outlines this in detail.

The increased hostility against North Korea also reflects just how few options the US truly has, now that the Philippines and Indonesia, two key positions along the Strait of Malacca, have aligned themselves with China and joined the Asia Infrastructure Investment Bank.

America’s hasty attacks on North Korea and Iran reveal another imperative for the US—new developments on the Diaoyu islands, which demonstrate the industriousness of the Chinese in securing them, effectively ending the territorial dispute.

The Brown Review highlighted that,

In February of 2017, satellite photos surfaced indicating that China was close to completing the construction of surface to air missile (SAMs) systems on the [Diaoyu] Islands [which] allow China to move significantly closer to establishing an Air Force Defense Identification Zone (ADIZ) in the area, which would secure Chinese air sovereignty.

A 2015 Oilprice article notes that,

With an estimated 298 billion barrels of oil, [Venezuela] is endowed with the world’s largest proven oil reserves, eclipsing Saudi Arabia (266), Iran (157) and Russia (80).

By blocking secure routes to South America, the US wishes to prevent Venezuela’s inclusion into China’s rapidly expanding repertoire of oil sources and further denomination of oil sales in yuan.

It continues, drawing a correlation to Venezuela’s ever-increasing trade with China,

Since 2007, Beijing has extended $50 billion in long-term loans to be repaid through oil deliveries of 600,000 barrels per day [and] provide Caracas with an additional $20 billion loan. In addition, China is building a refinery in Guandong province in order to process 400,000 barrels of Venezuelan crude oil per day.

This would force the Chinese to rely on land transit and secondary shipping routes, incurring a costly and dangerous journey for OBOR resources and significantly hampering the initiative

Interfering with the Strait of Malacca also blackmails another BRICS member—India—by blocking its Andaman Sea conduit via the strait, preventing it from receiving critical oil from none other than, of course, Venezuela.

India […] imports 72 percent of its oil requirements, with this figure set to rise to 88 percent over the coming decades. Imports from the perennially unstable the Persian Gulf currently meet about half of India’s total oil requirements – a statistic that New Delhi would like to change. As a result, New Delhi has taken initial steps to establish a long-term energy relationship with Venezuela.

Fascism is capitalism at gunpoint, and Trump’s aspirations are no exception. By monopolizing global oil trade with gunboat diplomacy, Trump, Inc. aspires to thwart the OBOR, potentially inciting a full-scale conflict that will be economical, militarily, and politically disastrous for all parties.

Read more: Trump’s speech in Riyadh in fact proves that the US needs…

It is doing this by using North Korea, a relatively low security threat, as a means of entering the region to destabilise China’s vulnerable Liaoning province, cutting off important shipments to Dalian, a major source of revenue for Liaoning, and endangering safe passage to major waterways to the western hemisphere, violating the 1982 U.N. Convention of the Law of the Sea.

Despite Trump’s calls for rapprochement with China and Russia, the endgame is to supplant them with the petrodollar; evidenced by America’s latest round of Russian sanctions and persistent meddling in the South China Sea.

It is important that Beijing and Moscow take the necessary steps to prevent this from happening. The world depends on it.

Haneul Na’avi is an independent journalist and geopolitical analyst based in the United Kingdom. He is a regular contributor to The Duran and has previously written for RT, Press TV, Global Research, and the Pravda Report. The views expressed in this article are the author’s own and do not necessarily reflect Global Village Space’s editorial policy.

Mexican children take up arms in fight against drug gangs

How US coerced Pakistan into war on terror

Bring the troops home from Korea