What is Pashtun Tahafuz Movement and what are its objectives? 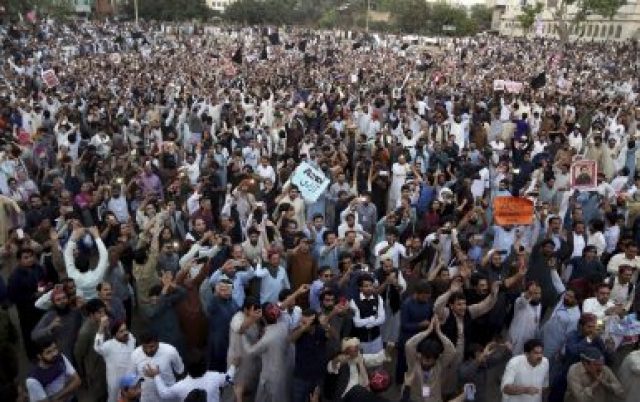 Thousands of Pasthuns gathered at Ring Road, near Pishtakhara, Peshawar to participate in a rally organized by the Pashtun Tahafuz Movement’s (PTM). The leader of the PTM Manzoor Ahmad Pashteen, 26 years old Pashtun, demanded equal rights for the people of Federally Administered Tribal Areas (FATA) and Khyber Pakhtunkhwa (KP). They have asked authorities to present the missing individuals before the courts, end curfews in Waziristan and arrest all those who are a part of Pashtun genocide.

He also mentioned that after Rao Anwar, former SSP who killed a Pasthun youth in a staged encounter, it’s the turn of Ihsan Ullah Ihsan, the former spokesperson of the banned Tehreek-e-Taliban Pakistan (TTP), to be brought before the court. Manzoor also said that the real culprit of Pashtuns’ genocide is General Pervaiz Musharaf who must be brought back to face the trail.

The state of Pakistan firstly needs to understand that at the moment this is not a movement of agents but a youthquake in FATA that needs attention and immediate actions, not negligence or suppression which might backfire yet again.

He further clarified that the PTM was a movement by the Pasthuns and he (Manzoor) is ‘an agent of his nation’. It is pertinent to mention here that the PTM rally did not get the attention of mainstream electronic media in Pakistan. Young Pasthuns across the Pakistan criticized the role of electronic media and demanded to be treated as equal Pakistanis. It is also important to understand what the PTM is, how it get organized and what are its objectives?

What is Pashtun Tahafuz Movement?

The PTM was not known before a sit-in in Islamabad where the people of South Waziristan gathered to protest against the extrajudicial killing of a youth Nqeebullah Mehsud who was a shopkeeper and an aspiring model. Rao Anwar, former SSP, staged an encounter to kill the young man in Karachi.

PTM comprises of disaffected pashtuns. The PTM is a nonviolent movement led by a young Pashtun, Manzoor Pashteen, against alleged enforced disappearances, extra-judicial arrests and killings, as well as the mistreatment of the Pakhtun community by security forces.

It is claimed by the leaders of the movement that in past decade more than 32, 000 Pasthuns have gone missing from FATA alone. The forced disappearances, claim the PTM leaders, are against the constitution of Pakistan. And if the ‘missing persons’ are criminals, asks Manzoor, they must be brought before the courts and punished according to the constitution of Pakistan.

As the PTM could not get the attention of the mainstream electronic media, the young Pashtuns mobilized their fellows on Social Media. The campaign has been extremely successful to bring Pashtuns out at rally in Peshawar.

Foreign Agents or a Youthquake?

Literature of the dynamics of politics of ethnicity reveals that the state of Pakistan has been in troubled waters while dealing with ethnically motivated movements. The problem at the very outset has been because of the state’s highly centralized policies and a political desire to unify people under one banner without uplifting their socioeconomic status. The Bengalis stood up against the central authority after they realized that they were being exploited and denied their political rights.

It created a sense of ‘internal colonialism’ and emerged into an organized movement for a separate country. Scholars argue that when smaller groups in a society are marginalized or exploited and denied equal rights they start revolting against the state. Initially, movements remain largely domestic but with the passage of time they start getting foreign aid as well. PTM is a movement of young Pashtuns against the exploitation, marginalization and alleged genocide of a community.

The people of FATA are demanding their democratic rights. The state of Pakistan firstly needs to understand the movement needs attention and immediate actions, not negligence or suppression which might backfire yet again. However questions are raised whether there is some funding behind PTM as such movements are expensive. The state’s failure to pacify the charged Pashtun youth may give opportunities to Pakistan’s enemies to intervene and urge these Pakistanis to go against the state.

Previous articleOPCW vote & South Asia: Why Pakistan backed Russia but India abstained
Next articleTrump to decide soon whether to retaliate for chemical attacks in Syria

23 June 2021
Previous articleOPCW vote & South Asia: Why Pakistan backed Russia but India abstained
Next articleTrump to decide soon whether to retaliate for chemical attacks in Syria

Pakistan to export meat to Malaysia

Mumbai attack comments: What future holds for Nawaz Sharif after his Anti-Pakistan statements