What next for Syria’s Kurds? 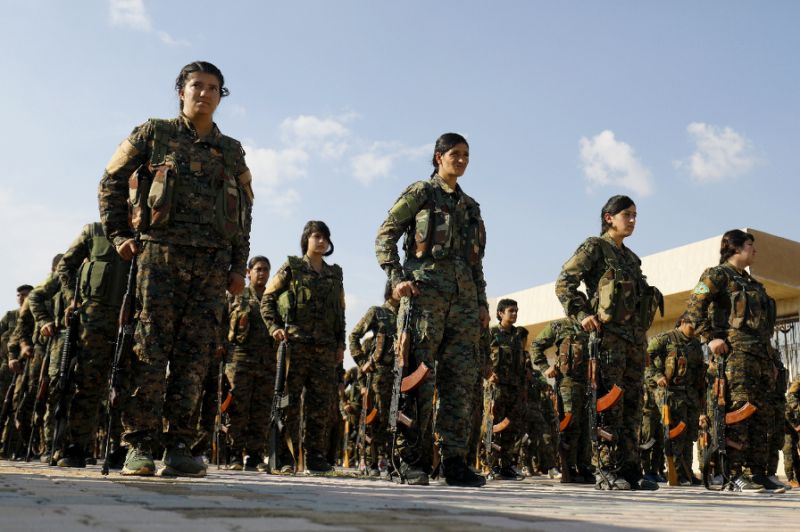 Syria’s Kurds have established an autonomous region during seven years of civil war, but the abrupt decision by their US ally to withdraw has thrown their political future into doubt.

Kurdish-led forces control a large swathe of the country’s north and northeast, some of it seized from the Islamic State group at the cost of heavy losses with backing from the US-led coalition.

Trump’s troop withdrawal announcement prompted the Kurds to seek a new alliance with the Damascus regime to protect them from a long-threatened attack by neighbouring Turkey.

A US withdrawal could leave them exposed on two fronts, both to an attack by neighbouring Turkey and its Syrian proxies and to a return of Damascus government institutions.

Will they Lose Land?

Syria’s Kurdish minority have largely stayed out of the civil war, instead forging autonomy in a large swathe of the north and northeast, including along the Turkish border. The fight against IS has allowed the Kurdish-led Syrian Democratic Forces to expand that territory to include the Euphrates Valley city of Raqa, as well as key oil and gas fields in the eastern province of Deir Ezzor.

On December 19, President Donald Trump took many even among his own supporters by surprise with the announcement of a full US troop withdrawal from Syria. On Thursday US Secretary of State Mike Pompeo said the withdrawal would indeed go ahead but would not give a precise timeline, so as not to tip off US adversaries.

“The importance of ensuring that the Turks don’t slaughter the Kurds, the protection of religious minorities there in Syria. All of those things are still part of the American mission set,” Pompeo told Newsmax, a US news and opinion site popular with conservatives. Trump’s troop withdrawal announcement prompted the Kurds to seek a new alliance with the Damascus regime to protect them from a long-threatened attack by neighbouring Turkey.

Turkey has led two previous incursions across the border, the most recent of which saw its Syrian proxies seize the northwestern enclave of Afrin from Kurdish forces last year.

Ankara views the Kurdish fighters of the SDF as “terrorists”, in cahoots with the outlawed Kurdistan Workers Party (PKK), which has been fighting Turkish troops since 1984. Although unlikely without prior agreements between regime ally Russia and rebel backer Turkey, analysts foresee a possible carving up of the northeast between the different sides.

What does the Regime Want?

Today, the regime holds almost two-thirds of Syria after victories against jihadists and other rebels and has pledged to eventually return the northeast to government control. Last week, Damascus deployed troops in the northern countryside to stem off any Turkish-led attack on the flashpoint SDF-held city of Manbij.

On Wednesday, the army said 400 Kurdish fighters had retreated from areas around the Arab-majority city. But an Arab contingent of the SDF remains in control, and US forces are also present as they have not yet withdrawn. On Monday, pro-government newspaper Al-Watan cited an Arab diplomat in Moscow as saying the northern city would revert to “full state supervision”.

The source also said Turkey, Russia and fellow regime ally Iran would discuss “a return of state institutions” to areas further east, beyond the Euphrates River, at a meeting expected at the start of the year. Balanche said the regime would eventually resume full control of the main northeastern cities of Hasakeh and Qamishli.

It would also retake the Arab-majority city of Raqa, as well as the oil fields of Deir Ezzor. “The Syrian army will… rapidly seize the Omar oil fields two-thirds of Syrian production,” Balanche said.

What does Turkey Want?

Turkey has led two previous incursions across the border, the most recent of which saw its Syrian proxies seize the northwestern enclave of Afrin from Kurdish forces last year.

But analyst Heiko Wimmen said Ankara would first have to seek consent from Moscow before any third offensive, especially to use its air force. “If it does happen, however, Turkey will try to control the border strip,” said Wimmen, of the Brussels-based think tank, the International Crisis Group.

“The question is whether the loss will be total or whether some of it can be salvaged… through a deal with the regime, guaranteed by Russia,” he said.

“What they are aiming for is a buffer zone along the border,” he added. Balanche predicted Turkish troops and their allies would eventually push 20 to 40 kilometers (12 to 24 miles) into Syria.

What of Kurdish Autonomy?

After decades of marginalization, since the civil war erupted in 2011 Syria’s Kurds have set up their own institutions in areas they control. Following the pulling out of government forces from Kurdish-majority areas in 2012, the Kurds set up their own administrations and implemented longstanding demands such as Kurdish-medium education.

But as loyalist forces gained ground last year and Damascus rejected Kurdish self-rule, the Kurds entered talks with the regime to seek some form of decentralization. With the Kurds now set to see their US ally withdraw from Syria, Wimmen said the Kurds were “certain to lose a lot”.

“The question is whether the loss will be total or whether some of it can be salvaged… through a deal with the regime, guaranteed by Russia,” he said. But “given the track record of the regime and its negotiation positions so far… there is little reason for optimism.”

‘Tired of fighting’: 30 years ago, Soviets withdraw from Afghanistan