What was the scandal between ‘Queen Victoria’ and her adviser ‘Abdul’? 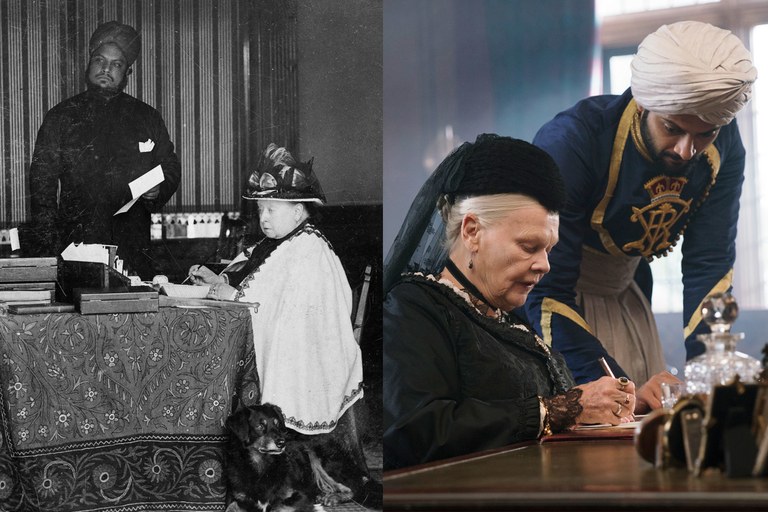 Near the end of her reign, Queen Victoria developed a friendship with an Indian servant, elevating him to trusted advisor and infuriating her court

As part of the festivities to celebrate Queen Victoria’s Golden Jubilee, celebrating 50 years on the throne, the Queen hosted dozens of foreign rulers at a lavish banquet. She led a grand procession to Westminster Abbey in open carriage, escorted by the Indian cavalry, greeted screaming crowds on her palace balcony, and enjoyed fireworks in the garden. But of all the jubilee’s memorable events, it was the queen’s encounter with Abdul Karim that became the most significant.

Karim died in Agra in 1909 with his correspondence destroyed and no children to preserve his memories. But something had survived the guards’ bonfire: his personal diary

The young man had arrived in the United Kingdom as a “gift from India,” one intended to help Victoria address the Indian princes at her banquet. Karim would quickly prove to be the Queen’s most trusted confidant and the most despised member of the royal court.

Queen Victoria’s unusually close friendship with her Indian servant began at the 1887 celebration and spanned 14 years, a period captured in the new movie Victoria & Abdul, starring Judi Dench as the titular queen. Karim was the queen’s beloved munshi, the teacher who gave her daily Urdu lessons, educated her on Indian affairs, and introduced her to curry.

Read more: Watch Video: How you have to control your sexual desires: Nouman Ali Khan explains

Queen Victoria, in turn, showered him with gifts, titles, and honors, much to the resentment of the royal family. When the queen died in 1901, her children burned every letter she sent Karim, whom they unceremoniously deported back to India. Yet his record lives on, thanks in large part to his diary, preserved by generations of descendants.

That diary was only recently unearthed by Shrabani Basu, the historian who wrote the movie’s source text. As Basu recounts in her book of the same name, Karim was born near Jhansi, the second-oldest child of six. His father, Haji Wuzeeruddin, was a hospital assistant, a skilled position that required some medical qualifications. While this occupation did not place Wuzeeruddin in the upper class, it was a good job, one that allowed him to hire a Maulvi, or Muslim scholar, to tutor his son.

Victoria could not control what happened to the Munshi from beyond the grave, but she did everything in her power to mitigate the harsh treatment she presumed her family would inflict upon him

Under the Maulvi’s tutelage, Karim learned both Persian and Urdu. He eventually secured a clerk position at a jail in Agra, one where his father and the brothers of his soon-to-be wife both worked. It was there that Karim was handpicked to serve the somewhat recently christened Empress of India, Queen Victoria.

The jail superintendent, John Tyler, offered Karim the opportunity. Tyler had recently escorted 34 inmates to the Colonial and Indian Exhibition of 1886 in London, where he showed off the carpets they had woven as part of their rehabilitation program. Queen Victoria was impressed and had asked Tyler during his trip about selecting two Indian attendants to assist her at her Golden Jubilee.

The men would facilitate communication with Indian dignitaries and wait on the queen. Karim was paired with Mohamed Buxshe, an experienced servant who ran the household of a British general. Compared with Buxshe, Karim was woefully unprepared for his new duties. But before he departed for London, he received a crash course in palace etiquette and the English language, as well as a brand-new wardrobe.

Queen Victoria’s first impression of Karim was recorded in her diaries, where she deemed him “tall with a fine serious countenance.” After their jubilee duties concluded, Karim and Buxshe traveled with the queen to her summer home on the Isle of Wight.

The queen was well aware of this animosity towards Karim and did not tolerate it. Fritz Ponsonby, her assistant private secretary, articulated her unwavering stance in a letter

There, Karim distinguished himself by surprising the sovereign with one of his favorite recipes. Using spices he had brought from Agra, Karim cooked a chicken curry with dal and pilau. According to Victoria biographer A.N. Wilson, the queen declared the dish “excellent” and added it to her regular menu rotation.

Eager to immerse herself further in Indian culture, Victoria asked Karim to teach her Urdu, or, as it was known at the time, Hindustani. Their lessons initially seemed somewhat relaxed. “Am learning a few words of Hindustani to speak to my servants,” Victoria wrote. “It is a great interest to me, for both the language and the people.” That interest soon turned to zeal.

In an effort to improve communication between teacher and student, the queen doubled Karim’s English lessons, and he was a fast learner. Within two months, Victoria had ceased sending Karim instructions through her staff and begun writing him directly. Within a few more, she had bestowed upon him the title of Munshi Hafiz Abdul Karim, making him her official Indian clerk and relieving him of his menial duties.

This developing relationship alarmed members of the court because it felt all too familiar. Prior to Karim, Victoria’s closest confidant had been her Scottish servant, John Brown. The queen had leaned heavily on Brown after her husband Albert’s death, so much so that several members of the court derisively referred to her as “Mrs. Brown.” (The movie adaptation of that story, Mrs. Brown, also starred Dench as Victoria.)

He was also afforded perks few servants could fathom. The queen not only allowed the Munshi to bring his wife over to England but hosted his father and other family members

But Brown had died in 1883, and no servant had taken his place in the queen’s inner circle. Karim, however, was increasingly stepping into that role. He was traveling constantly with Victoria and, as Michael Nelson notes in Queen Victoria and the Discovery of the Riveria, even occupying Brown’s old bedchambers.

Although Karim’s diaries suggest nothing romantic, his relationship with Queen Victoria was oddly intimate. The two turned heads when they spent the night at Glassat Shiel, a remote cottage in Scotland that the queen had previously shared with John Brown. (After his death, she had vowed never to return.)

Basu notes that Victoria signed letters to Karim as “your closest friend” and “your loving mother.” He was also afforded perks few servants could fathom. The queen not only allowed the Munshi to bring his wife over to England but hosted his father and other family members. Karim enjoyed his own personal carriage and the best seats at the opera.

In their letters to one another, Victorian courtiers wished awful fates upon the Munshi. Basu shares several nasty excerpts in her book. Lady-in-waiting Marie Millet rued, “Why the plague did not carry him off I cannot think, it might have done one good deed!” Private secretary Arthur Bigge wished Karim and his father “a happy and lasting retreat in the Jail!”

This developing relationship alarmed members of the court because it felt all too familiar. Prior to Karim, Victoria’s closest confidant had been her Scottish servant, John Brown

Some royal associates had reasonable complaints about Karim’s extravagant requests. He frequently asked the queen for favors, such as securing his father a pension or his former boss a promotion. But it wasn’t just his arrogance that annoyed them. Historians have plainly pinned the hatred on 19th-century racism.

As Carolly Erickson writes in Her Little Majesty, “For a dark-skinned Indian to be put very nearly on a level with the queen’s white servants was all but intolerable, for him to eat at the same table with them, to share in their daily lives was viewed as an outrage.”

The queen was well aware of this animosity towards Karim and did not tolerate it. Fritz Ponsonby, her assistant private secretary, articulated her unwavering stance in a letter. “The Queen insists on bringing the Munshi forward, and if it were not for our protest, I don’t know where she would stop,” he wrote.

“But it is no use, for the Queen says it is ‘race prejudice’ and that we are jealous of the poor Munshi.” Victoria heaped gifts and titles upon Karim partially because she knew the court would not pay him the same respect once she was dead. But she made sure her friend would be comfortable and remembered.

While Karim already enjoyed homes at the royal residences of Windsor, Balmoral and Osborne, Victoria also secured a land grant for him back in Agra. She commissioned multiple portraits of him and had him written up in the Court Circulars and local Gazettes.

In her final wishes, she was quite explicit: Karim would be one of the principal mourners at her funeral, an honor afforded only to the monarch’s closest friends and family. Victoria could not control what happened to the Munshi from beyond the grave, but she did everything in her power to mitigate the harsh treatment she presumed her family would inflict upon him.

The queen’s fears were justified. Upon her death on January 22, 1901, Victoria’s children worked swiftly to evict their mother’s favorite adviser. Edward VII sent guards into the cottage Karim shared with his wife, seizing all letters from the queen and burning them on the spot. They instructed Karim to return to India immediately, without fanfare or farewell.

Victoria’s heirs could not completely erase the Munshi from the public record, but they edited and obscured his narrative to the best of their abilities. Karim died in Agra in 1909 with his correspondence destroyed and no children to preserve his memories. But something had survived the guards’ bonfire: his personal diary. The book secretly stayed in the family of Abdul Rashid, the Munshi’s nephew, for several generations.

His descendants shared the journal with Basu in 2010, over a century after the queen’s death. Kamir’s diary gave incredible new details on an unexpected, intense friendship that crossed class and racial lines — one that began with a delicious plate of chicken curry.

The article originally appeared at smithsonian.com

Previous articleParliament needs to be cleansed of the Abu Jahal’s of our times
Next article“Mahira’s Witch Hunt: A Battle between Morality & Modernity?”

24 July 2021
Previous articleParliament needs to be cleansed of the Abu Jahal’s of our times
Next article“Mahira’s Witch Hunt: A Battle between Morality & Modernity?”