When Czechoslovaks cracked jokes in the face of Soviet tanks 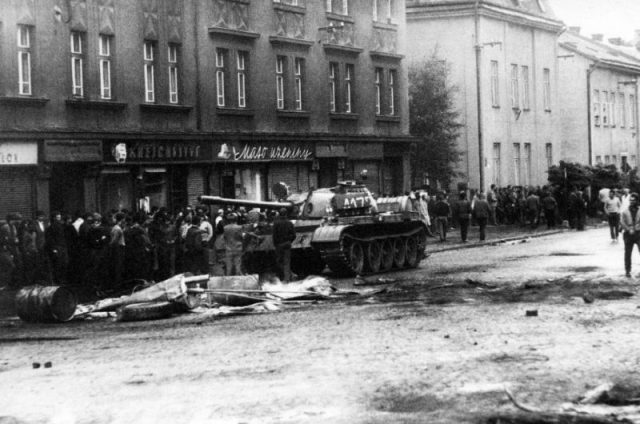 Even when Soviet tanks invaded their country on August 21, 1968, to wipe out a pro-democracy movement, Czechoslovaks managed to maintain their unique sense of humor. Devoid of other means of defense, they turned Czechoslovakia into a humor magazine of sorts, by writing ironic slogans in chalk or paint on walls or scrawling them on papers posted around town.

“We’ve deepened the friendship so much that it reaches rock bottom,” wrote an anonymous joker, pointing out that the Soviet Union invaded Czechoslovakia in the company of four Warsaw Pact allies. The forces crushed the Prague Spring movement that had briefly introduced democratic reforms to the totalitarian Soviet-led regime.

A Swiss soldier stole my Russian watch!” Puzzled, the officer ventures: “Maybe it was the other way around?” To which the man replies

“Lenin, wake up, Brezhnev has gone mad!” said another slogan, perhaps hoping that the father of the Soviet Union might have disapproved of the invasion orchestrated by one of his successors. In the same vein, another common phrase suggested that Vladimir Lenin “would be ashamed to see you here”. This one was frequently chanted by both Czechs and Slovaks facing the Soviet-led troops, as it rhymed in both languages.

Such chants puzzled the ordinary Soviet soldiers who did not understand why they were sent to Czechoslovakia in the first place and now had to face the question “Why did you come?” dozens of times a day in Russian from Czechs and Slovaks. Many slogans also targeted Moscow’s insistence that Czechoslovakia had welcomed the Soviet Army with open arms for having “crushed an emerging counter-revolution”.

“The TASS news agency reports that the soldiers were welcomed with flowers. We add: this is true, but they were in flying flower pots,” went one such joke. Another phrase quoted a made-up correspondent from the Soviet news agency as saying: “Twelve new counter-revolutionaries were born in Prague today. Send more tanks!”

The typical humor seen in the classic Czech novel “The Good Soldier Svejk”, whose hero pretends to be both naive and stupid to steer clear of problems, was on display in numerous appeals against collaborating with the occupiers and their local helpers. The Vecerni Praha newspaper published “Ten Commandments” for local residents: “1) I don’t know, 2) I don’t know them, 3) I won’t tell, 4) I don’t have that, 5) I can’t do that, 6) I won’t give that, 7) I can’t, 8) I won’t sell that, 9) I won’t show that, 10) I won’t do that.”

Czechoslovakia did not finally shed totalitarian rule until 1989, four years before splitting into the Czech Republic and Slovakia

In a popular joke, a little boy looks out the school window and says: “It could happen today.” The teacher asks him what he means and he replies: “My dad said, one fine day, the Russians will go to hell.” According to another joke, a man goes to the police station to file a complaint: “A Swiss soldier stole my Russian watch!” Puzzled, the officer ventures: “Maybe it was the other way around?” To which the man replies: “You said it, not me!”

To slow down the Soviet army and secret services, Czechs and Slovaks painted road signs across the country white, while streets were renamed “Dubcek Street” after the reformist leader Alexander Dubcek. A popular case of wordplay involved the fact that then Czechoslovak president Ludvik Svoboda’s last name means “freedom” in both Czech and Russian.

Svoboda at first cautiously supported Dubcek’s reforms, but he bowed to the Soviet-imposed “normalization” in the end. “Welcome, Svoboda. Have you brought freedom?” asked an inscription on a wall when Czechoslovak leaders were due to return from a visit to Moscow. Czechoslovakia did not finally shed totalitarian rule until 1989, four years before splitting into the Czech Republic and Slovakia.

Why Northern European Tribalism has led to an embrace of amoral liberalism?