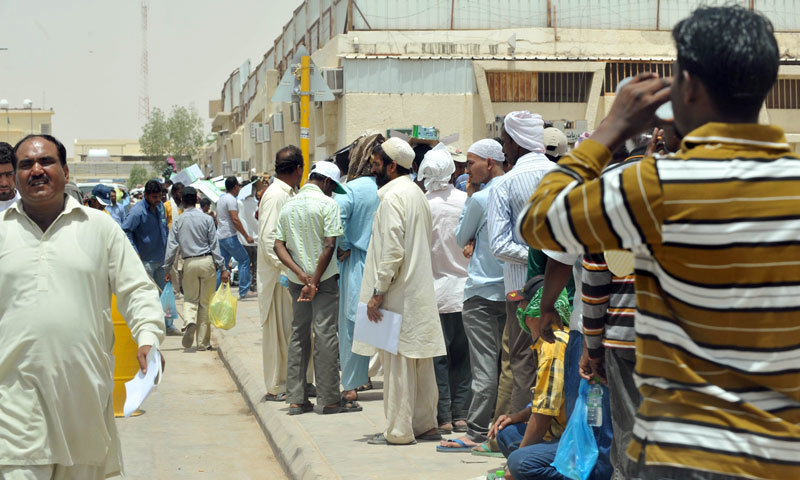 DOHA: Pakistan is finally receiving blowback from slowing growth  in the Gulf economies. The State Bank of Pakistan (SBP) last week announced that foreign remittances to Pakistan fell by nearly 2% during the first seven months (July 2016 to January 2017). GCC countries are using fewer Pakistani manpower and more from India and Bangladesh and this is hitting remittances coming back home.

The decline was from all markets but particularly seen from the remittances coming from the US, UK, Saudi Arabia and United Arab Emirates. Overseas financial transfers will continue to fall as uncertainty prevails not only in America but also Brexit-marred UK and turmoil-hit members of the Gulf Cooperation Council (GCC).

Where are the Gulf economies stuck?

This year is expected to see a slow uptick in the GCC economies, which largely remain dependent on profits from hydrocarbon exports. Thanks to Saudi decision of lowering oil output, the oil price has soared to $50 per barrel.

Remittances from Saudi Arabia declined 5.6% to $3.70 billion, United Arab Emirates 1.8% to $2.44 billion and 1.7% to $1.34 billion from other nations of the GCC. The SBP noted that the remittances summed a record $19.9 billion in 2015-16 till June 30. The GCC resident Pakistanis contribute 65% of the country’s overall remittances with Saudi Arabia and the UAE being the top two.

read more: Can Raheel Sharif help to improve tense relations between Saudis and…

The GCC economies are not just hit by excessive supply of petrochemicals in the global market but also war in Yemen and the tense near-war situation in the Arabian Gulf with Tehran.

Alarmed by the multidimensional vulnerabilities, Gulf States are busy struggling to right-size economic and political punch. With around 45% of the world’s oil reserves and Saudi Arabia alone controlling about 37% of the supply, the Kingdom is the first one to introduce massive economic reforms articulated in document ‘Saudi Vision 2030’.

Overall, the World Bank predicts less than 2% economic growth in the region with the oil price lurking in the vicinity of $50 per barrel. Job market in the GCC equally depends on the situation in Yemen as well as tensions with Iran.

Flight of capital at the hands of Gulf citizens has continued unabated ever since Iran sanctions were lifted. In fact with Trump’s anti-Iran posturing, the risk of hostilities in the Arabian Gulf has heightened. Though Houthi insurgency is on its last legs, the daunting task of peace-building to be further followed by reconstruction has yet to begin.

Of over 50 million inhabitants of the GCC member countries, 75% are migrant workers, thousands of whom lost their jobs and left for respective homelands leaving behind outstanding salaries and carrying along unpleasant last memories in 2016. The trend is less likely to reverse.

The Gulf governments are increasingly resorting to temporary non-payment to contractors while stalling public sector projects and the imposition of unprecedented taxes or price hike have become the new normal here.

Though domestic workers are less at risk compared to the ones employed in infrastructure development and services sectors such as banking, hospitality etc. Pakistan’s remittances from Saudi Arabia are likely to stabilise for a simple reason that its manpower is diversified and employed proportionately in white- and blue-collar job segments.

So far, the returnees predominantly served in the construction industry, which was hit massively due to the halt in projects as well as outstanding public sector payments.

Decline in oil and gas sector jobs is obviously temporary, predicted to last till early 2018. The GCC nation will eventually have to diversify as petroleum resources decline rapidly over the next two to three decades.

read more: Muslims are the least educated amongst all the major religions

As the economies gradually move towards diversification, the job market is going to change too. A hardworking construction worker, house-worker and semi-skilled technician won’t be needed.

The state-of-the-art machinery, robots and automated tellers will replace the migrant labour, mainly from Pakistan, India, Bangladesh, Egypt and Philippines. The high-tech machines are far easier to manage as they have to be imported and installed once, without any need for annual family visits or health or accommodation necessities.

Without much ado, Islamabad and its provincial units must chalk out and put in place intensive plans to train and groom a large labour force with proficiency in English and Arabic to continue tapping the enormous job market of the Gulf.

The Saudi Vision 2030 holds many clues for Pakistan’s future priorities towards manpower export and training. While hard pressed to employ their own jobless citizens at higher rate first, the GCC economies are studying the Saudi plan to accustomise and articulate their own.

Saudi Arabia, the UAE, Bahrain and Qatar remain of particular significance as Pakistan’s labour export markets. Without much ado, Islamabad and its provincial units must chalk out and put in place intensive plans to train and groom a large labour force with proficiency in English and Arabic to continue tapping the enormous job market of the Gulf.

Over the past decade, cheaper and better trained Indians and Bangladeshis have replaced Pakistani manpower. Islamabad’s embassies added insult to injury owing to its personnel’s’ trademark nepotistic and lethargic attitude.

For example, the Ministry of Foreign Affairs’ apathy can’t be ignored as for years Kuwait has been banning Pakistani manpower while letting Indians and Bangladeshis in. Neither the Ministry of Overseas Pakistanis and Human Resource Development is concerned nor does it ring alarm bells in the Prime Minister’s Secretariat.

Time is running out for Pakistan to transit from low-skilled labour exporter to high-skilled ones. The country is swarming with educated but unemployed youth and the government has been failing to train manpower

While Pakistan needs to engage with GCC at a multilateral level by forming a bloc, which may include China in the wake of China-Pakistan Economic Corridor – as Gwadar port is primarily meant to serve as base for the oil rich nations’ and China’s imports and exports, it also needs to intensively pursue preferential labour export deals. There has been some headway in the case of Saudi Arabia and Qatar last year but it leaves much to be desired.

Time is running out for Pakistan to transit from low-skilled labour exporter to high-skilled ones. The country is swarming with educated but unemployed youth and the government has been failing to train manpower and serve as bridge with the GCC governments, which maintain control over job quotas for each nation.

read more: Religion and Education Around the World

Besides, the Islamic republic is in dire need of skill development centres as well as finishing schools for professional training and grooming. Even if the GCC societies and economies modernise significantly over the next decade, better-employed white-collar manpower will anchor the country’s need for vital foreign exchange.

However, nothing can undermine the significance of export surplus economy, which remains an elusive fantasy for decades.

The writer is a Pakistani investigative journalist and academic with extensive reporting experience in the Middle East and North Africa. He is based in Doha and Istanbul. He tweets at @naveed360. This pieces was first published in The Express Tribune, & is produced with permission.