Who authorized the ARU to inquire against Justice Qaiz Faez Isa? Asks SC

The legal counsel for Justice Qazi Faez Isa raised a question before the SC: can the material collected through illegal means be used in court against a judge? The court has reservations against the authorisation and funds used to pursue Justice Isa's case. 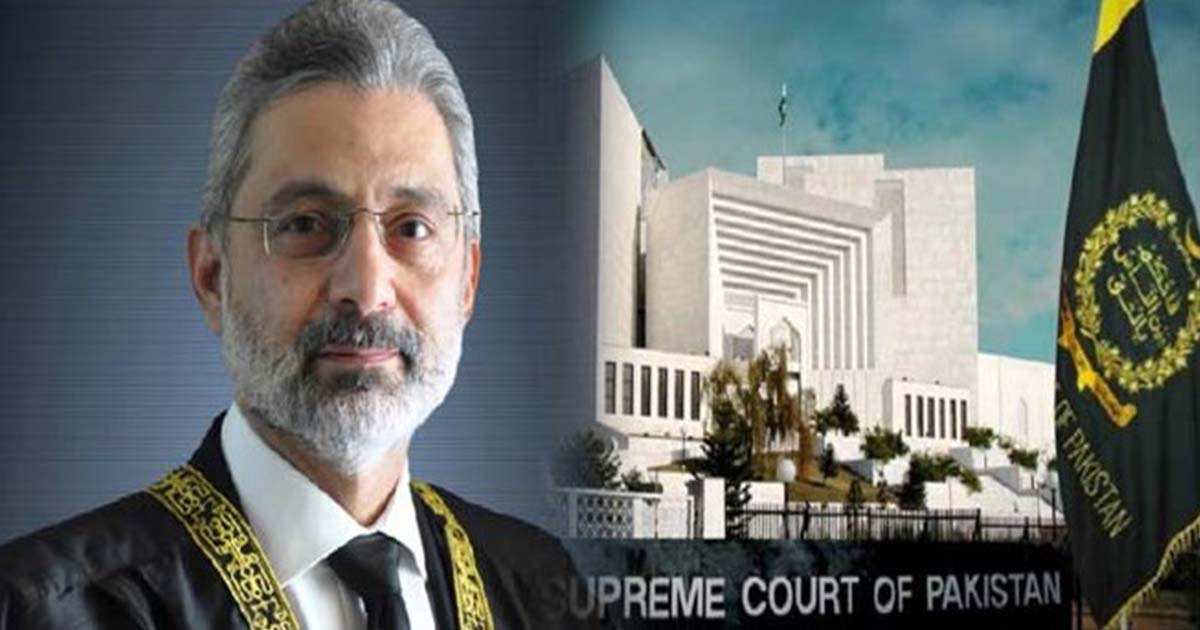 The Supreme Court (SC) on Monday asked Attorney General Anwar Mansoor Khan that under which law the government officials made the reference against Justice Qazi Faez Isa public and who authorized the Asset Recovery Unit to inquire against the apex court judge.

The reference filed against Justice Isa alleges that he acquired three properties in London on lease in the name of his wife and children between 2011 and 2015, but did not disclose them in his wealth returns.

During the course of proceedings, the attorney general submitted a report about Justice Isa’s wife and said that she claimed she was filing returns in Karachi while her husband had stated that his income was not taxable, so he did not file returns. Justice Isa’s wife requested for transfer of records from Islamabad to Karachi, he added.

He said she had filed online returns in 2012 and 2013 but the Federal Board of Revenue (FBR) issued notice to her for not filing tax returns after 2015.

Read more: Can illegally collected material be used against a judge?

The attorney general said that the record of her tax returns had been sent to Karachi and she was also informed about the FBR report.

Justice Umar Ata Bandial asked the attorney general when he would commence his arguments.

The attorney general requested the court to grant him time to prepare the case.

Mr. Malik said that Special Assistant to the PM on Accountability Shahzad Akbar had conducted an investigation against the judge and his family without any legal authority to do so and accessed classified information about their tax details

Justice Umar Ata Bandial asked who gave the authority to the Asset Recovery Unit to inquire against the apex court judge. He asked under what law government officials made the reference public.

Where had the Asset Recovery Unit (ARU) received funds from?

Recently, the Supreme Court inquired about where the Asset Recovery Unit (ARU) received funds from for initiating an investigation against Justice Qazi Faez Isa. The court maintained that there can be no investigation through illegal means to obtain personal information.

Supreme Court on Wednesday inquired about where had the Asset Recovery Unit (ARU) received funds from for initiating an investigation against Justice Qazi Faez Isahttps://t.co/xktOSc9Bpg pic.twitter.com/0cZVkXwHpK— Earthman Journalist (@Intprofessor) November 28, 2019

Legal experts believe that the court may ask the federal government to explain its position on the matter. “This is not an ordinary matter. The court must look into it,” a lawyer said. It is argued that the SC is likely to ascertain the facts whether the reference has been filed on mala-fide intentions or not.

According to the details, the question was raised by Justice Maqbool Baqar as a 10-judge full-court, led by Justice Umar Ata Bandial, resumed hearing of the case pertaining to the presidential reference against Justice Isa. Muneer A Malik, Justice Isa’s counsel, raised questions about the legal status of the ARU.

Mr. Malik said that Special Assistant to the PM on Accountability Shahzad Akbar had conducted an investigation against the judge and his family without any legal authority to do so and accessed classified information about their tax details. “The reference was prepared after illegally collecting material against him. It has been conceded in the reference that ARU had received a complaint against the judge and the chairman of the unit took it to the law minister rather than the prime minister or the cabinet,” he added.

It is important to recall that the government has informed the SC that Justice Qazi Faez Isa was the ‘ostensible owner’ of three properties in the United Kingdom as his family members purchased the assets at a time when they had no independent source of income. The government in its response lamented over the behavior of Justice Isa who instead of addressing the questions raised in the reference started vilifying the complainant.

The government’s response states that instead of providing answers, Justice Isa “took a very evasive stand and started vilifying and castigating the complainant”.

Justice Isa is said to be facing ‘consequences’ after he delivered a strong-worded verdict in the Faizabad sit-in case. The judgment authored by Justice Isa drew some broad and important conclusions. For example, the court has directed the federal and provincial governments to monitor and prosecute those advocating hate, extremism, and terrorism. It also ordered the government ─ through the defense ministry and respective chiefs of the armed forces ─ to initiate action against armed forces’ personnel found to have violated their oath.

The judgment further states that any person who issues an edict or fatwa that “harms another or puts another in harm’s way must be criminally prosecuted under the Pakistan Penal Code, the Anti-Terrorism Act, 1997, and/or the Prevention of Electronic Crimes Act, 2016.”

Read more: Why did you write letters to the President? SJC issues show-cause notice to Justice Qazi Faez Isa

Finally, the judgment states that Inter-Services Intelligence, the Intelligence Bureau, Military Intelligence and the Inter-Services Public Relations “must not exceed their respective mandates”. It also reinforced the idea of freedom of speech which, the court said, is also subject to the law.

Many in Pakistan believe that he is now being targeted for his judgment which also made PTI a part of it and slammed it for using the religious card to target the then-government of PML-N. The top court has to determine whether such speculation holds some ground or not. If yes, the apex court is expected to provide more constitutional security to its judges so that they may pronounce more firm and strong judgments.

Can China replace the US in the near Future?

Infighting within PML(N) worsens as accountability of Sharif clan continues