Who is going to be Nawaz Sharif’s new Army Chief?

Who will be Pakistan’s next Army Chief? This question is on the minds of political pundits from Islamabad to Delhi to Washington. This intense speculation kick started when on Monday, DG ISPR Lt. General Asim Bajwa put to rest unending debate around a possible extension for General Raheel Sharif by announcing that COAS had begun a round of farewell visits to various garrisons.

Gen. Raheel Sharif while addressing a large gathering of officers of army and rangers in Lahore emphasized that he has striven for peace and stability and for defeating the enemy goals against Pakistan. Gen. Sharif will retire on 29th November and before this PM Nawaz has to name his successor.

While tradition in Pakistan is that Army General Headquarters officially sends a seniority list of top ranking officials without any recommendations, the political rumor mill is alive with the suggestion that Army prefers, battle hardened, Lt. Gen. Ishfaq Nadeem, currently Corps. Commander Multan as the next COAS and the senior most officer, Lt. Gen. Zubair Hayat will be promoted as Chairman Joint Chiefs of Staff, since Gen. Rashad, current CJCS is also set to retire on 29th November. Sources insist that Gen. Raheel Sharif has an understanding with the PM that GHQ’s unwritten recommendation of Gen. Ishfaq Nadeem as COAS will be adhered to. However as per the sources PM Nawaz had to make that public by 23rd November and so far there is silence on that issue.

No Chief executive in Pakistan has appointed more Army Chiefs than Nawaz Sharif. Selecting Gen. Raheel’s successor will be the sixth time PM Nawaz will be making this decision. His first appointment was Gen. Asif Nawaz Janjua in Aug 1991 at the retirement of Gen. Mirza Aslam Baig. Gen. Baig was instrumental in transferring power to Nawaz Sharif after the death of Gen. Zia and later with the unceremonious sacking of Benazir Bhutto’s short lived govt. With Gen. Janjua’s sudden death, Nawaz Sharif appointed Gen. Waheed Kakar (Jan 1993) and later Gen. Musharraf in Oct 1998. The momentary appointment of Gen. Zia ud Din Butt as replacement of Gen. Musharraf in October 1999 was also technically a Nawaz Sharif political decision, though it lead to a coup and is not part of official records. Gen. Raheel Sharif was thus the fifth appointment of an Army Chief, if we factor in the appointment of Gen. Zia ud Din Butt as one of the political decisions.

With this vast experience at his disposal, it is only natural to think that appointing Army Chiefs is a routine matter for Pakistan’s third time PM: Nawaz Sharif. However historical record shows otherwise. He was at logger heads with his fist appointment, Gen. Asif Nawaz Janjua and when later suddenly died of a heart attack, street rumors continued for months that General Janjua was poisoned and it had something to do with the political tensions with the government. Gen. Waheed Kakar was instrumental in making both President Ghulam Ishaq and PM Nawaz resign in 1993, when both could not resolve their political confrontation and had created an unprecedented standoff between Punjab police and federal force of Rangers. In 1998, Nawaz Sharif unceremoniously sacked Gen. Jehangir Karamat and brought in Gen. Musharraf – 3rd or 4th on seniority list – as his new Chief. Nawaz’s assumption was that a Muhajir from Karachi will be a weak chief in an army dominated by Punjabis. However when after Kargill, Nawaz tried putting all the responsibility upon Gen. Musharaf and tensions developed, army generals stood by a Muhajir Chief even when Nawaz had officially replaced Musharraf with Gen. Zia ud Din Butt. The miscalculation landed Nawaz Sharif in jail and later in a long and lonely exile in Saudi Arabia. 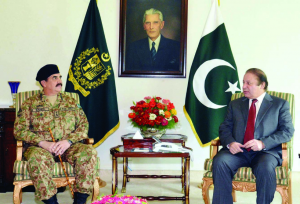 With this historical lens, it becomes clear that Gen. Raheel Sharif was his best and safest bet in his entire political career. When Gen. Raheel was appointed, many eye brows were raised and retired and serving officers quietly pointed out that Gen. Raheel was slow in making decisions and that Nawaz Sharif’s brother, Shahbaz Sharif, as Chief Minister Punjab, had struck a good mental equation with Gen. Sharif as Corps Commander. Later critics silently argued that Gen. Sharif had gone out of the way, at least twice, to politically bail out PM Nawaz Sharif; one, during the 2014 dharnas when he was asked by Nawaz Sharif to mediate with protesting opposition on Islamabad’s constitution avenue and he failed to extract any political concessions for the protesting opposition and later when he supported the second Joint Investigation Team (JIT) to investigate Model Town killings of June 2014. The second JIT was a political requirement of Shahbaz Sharif since the report by Lahore High Court Commission of Justice Baqir Najfi (appointed by the Chief Minister Shahbaz Sharif) had almost indicted the Shahbaz Govt for the killings in Model Town.

It was in this political context that many expected Gen. Raheel Sharif to get an extension. Rumors of either an extension or term increase to four years started to circulate in Islamabad’s political circles in late 2015. By November and December 2015, it was being hotly debated on tv talk shows with all kinds of arguments for and against the general. This soon turned ugly and nasty and personal.

In January 2016, DG ISPR while quoting the army chief ended speculation theories about extension in service of COAS by categorically rejecting reports that the army chief would seek to extend his tenure from three to four years. 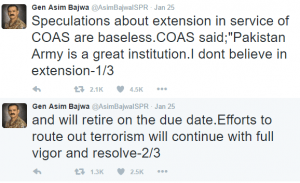 It was rare and rather awkward moment for an Army Chief to say: ‘I am not interested.’ Operation Zarb-e-Azb was a natural culmination of Pakistan Army’s continuing institutional strategic struggle against urban and peripheral insurgencies. However, its historical background was often set aside and in popular imagination it was credited mainly to Gen. Sharif who was soon seen as the hero, Pakistan was always looking for in its desperate times. Under Gen. Sharif lead army Pakistan saw increasing stabilization in its northwest, Federally Administered Tribal Areas (FATA), Baluchistan and Karachi. General’s accountability drive that lead to the sacking of senior officers including a Lt. General lead to hopes that this process will soon extend to Pakistan’s notoriously corrupt political elite and a clean up operation across Punjab. However, no such development took place and ISPR was often blamed by its critics for building a personality cult around General Sharif. 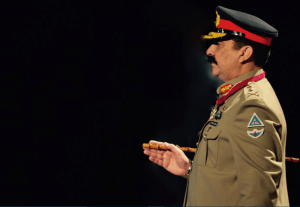 PM Nawaz Sharif is the only person who exactly knows who the next army chief will be, but political and media speculations are continuing for the past several months. As for the seniority list Lt. Gen. Maqsood Ahmed tops the list, which is currently working as Military Adviser UN Department of Peacekeeping Operations, New York.  But Gen. Maqsood is already on extension and he would not be considered for the post of COAS. The second in line is Lt. Gen Zubair Hayat currently posted as Chief of General Staff. (CGS). He has previously served as Corps. Commander Bahawalpur and Chairman Strategic Planning Division (SPD); when he was brought back from SPD to be the Chief of General Staff then it was speculated that Gen. Raheel has selected him as his successor but now the rumor mill says that Gen. Hayat is likely to be appointed chairman of the Joint Chiefs of Staff committee.

Political pundits predict, and there is much consensus on it, that Lt. Gen. Ishfaq Nadeem Ahmed, who is Commander II Corps Multan is the most favorite candidate for the COAS post. Army officers consider him to be the most decisive, war hardened general. Other in contest are Lt Gen Javed Iqbal Ramday, Commander XXXI Corps Bahawalpur and Lt Gen Qamar Javed Bajwa, Inspector General Training & Evaluation. Lt Gen Syed Wajid Hussain Chairman Heavy Industries Taxila and Lt Gen Najibullah Khan DG Joint Staff Headquarters both figure in the seniority list but are not technically qualified to be appointed army chief since they have not commanded a corp.

But all these speculations rest upon Army’s consensus around Lt. Gen. Ishfaq Nadeem for being the strong officer. PM Nawaz Sharif on other hand has developed the reputation of appointing either the weakest of the men or utter loyalists. He promised his able lieutenant Sartaj Aziz to make him the President of Pakistan but later retained him in Foreign Office merely as an adviser, his selection of a non-entity, Mamnoon Hussain as President reflected his mind set and exhibited his deep seated fears. Recently the selection of an ailing loyalist, Justice Saeed uz Zaman Siddiqui as Sindh Governor in a province that demands a robust role for a governor again reflected his priorities. If Nawaz Sharif ended up appointing Gen. Ishfaq Nadeem as his next Army Chief, then it will only confirm the presence of an institutional pressure. But Nawaz Sharif is continuously defying such institutional pressures; he can still surprise all political pundits by pulling a coup and appointing someone he thinks is either the weakest or the utter loyalist.

Regulatory Authorities for approval of building plans should be privatized