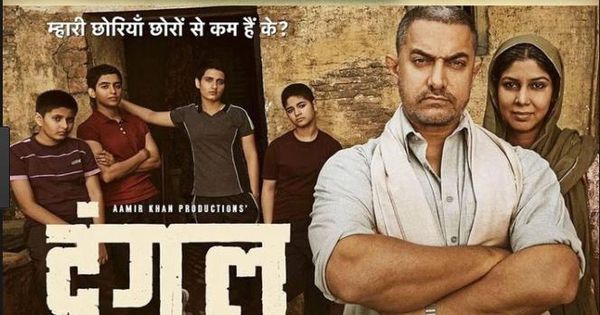 “The ideas of breaking gender roles and reforming education inspired by the film have struck a chord with many Chinese parents.”
– Xinhua

The film that became a big hit is based on real life story of a wrestler Mahavir Singh Phogat an amateur wrestler who was denied the chance to become an International Champion and took out his aspirations through his daughters. He trained his daughters, Geeta Kumari Phogat and Babita Kumari Phogat to follow his footsteps and become world class grapplers.

“The ideas of breaking gender roles and reforming education inspired by the film have struck a chord with many Chinese parents,” the official Chinese Xinhua news agency said. China due to its decade-long one child policy suffers from a large gender imbalance due to female infanticide.

Dangal takes on the status quo thought against gender roles

Dangal has impressed audiences with its overt message to give girls a chance in male dominated fields and to push them to do whatever they excel at and that South Asian parents should not worry about what the society thinks is the right field for women to work in.

Dangal, which was produced and financed by Disney’s Indian accessory UTV. Chinese audiences have found the plot appealing, about an Indian father who gave strength to his daughters to attempt a wrestling tournament, going against existing social and gender norms in India and those found in South Asia generally.

In 2014, Amir Khan took an interview of the two sisters Geeta and Babita on his talk show. The girls revealed how their father introduced them in wrestling.

After “Dangal” Amir Khan became most popular Indian social media star in China gaining over 6.55 lakh Chinese followers. Three of his last four movies were hits in China. Currently, he is followed by over 20 million people on Twitter alone.

Real-life facts about Phogat and his daughters

In 2000, when Karnam Malleshwari won the Olympic bronze medal, it became an inspiration for Mahavir Phogat to grow up his akhaada with girls. Mahavir accepted to be an ambitious taskmaster, authoritative his daughters practice as the boys and even punished them.

In 2014, Amir Khan took an interview of the two sisters Geeta and Babita on his talk show. The girls revealed how their father introduced them in wrestling.

Mahavir created a revolution in women’s wrestling, a game which is traditionally male-dominated in nature. He trained three of his daughters (Geeta, Babita, Venish) in wrestling who represented India in Olympics.

Amir Khan undergoes an amazing transformation, played the role of a wrestler with his body, both his gait and his eyes and face and wrestling abroad like he was akhada born. While he is known to put his heart and soul into playing every role artfully, even the young actresses (Fatima Sana Shaikh as Geeta and Sanya Malhotra as Babita Phogat, and Zaira Wasim and Suhani Bhatnagar as their respective younger sisters) are just as able playing as the gritty, feisty, amusing siblings, in tune with each other.

Crimes on women: Third girl burned and raped in India

What inevitable regional developments are in the offing? (Part 2)